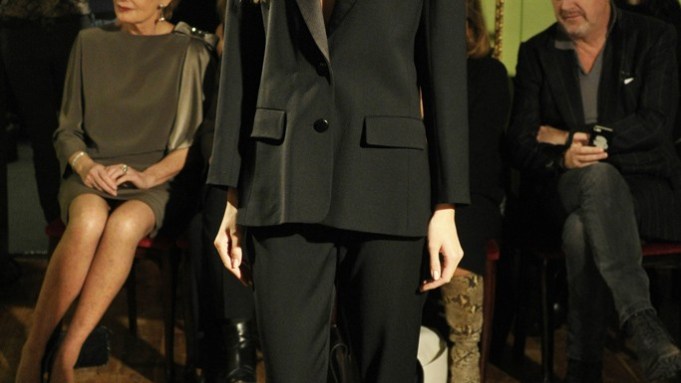 PARIS — In a career spanning more than six decades, Pierre Cardin has amassed a colossal fortune, sumptuous homes and dozens of industry honors — but the 91-year-old designer reckons his greatest luxury is freedom.

On Tuesday night, he eschewed the official Paris couture week calendar to hold his first high-fashion runway show since 1996.

“I staged fashion shows for 60 years of my life, and now I want to stand on my own, to show when I feel like it. I no longer want to have any obligations,” Cardin told WWD after the display at his restaurant Maxim’s. “I’m at home here. I can decide what I want. I am free — I don’t depend on anyone.”

The Space Age couturier showed lineups for women and men under the label Maxim’s de Paris. Officially, the event marked the 60th anniversary of Cardin’s first fashion show under his own name. As with the other collections he has shown sporadically over the last few years, this show contained a plethora of ideas reflecting his lifelong obsessions with geometry, futurism and freedom of movement.

He kicked off with women’s trouser suits with tuxedo jackets, many featuring graphic patent leather appliqué details at the front, that at times seemed to float on the models’ slim frames, making them more suggestive of oversize off-the-peg creations than exclusive made-to-measure couture.

Cardin made a stronger case with his dresses, draping and knotting bolts of jewel-colored satin or pastel organza around the body to create sweeping gowns accented with large bows, ruffles or blooms.

Among the more flamboyant looks was a glittery long black gown with cape sleeves, worn with a rhinestone fringe headband that might appeal to Lady Gaga.

“This is a modern collection — nothing too tight at the waist, no buttons or tricky details. It’s free, as free as people and fabric should be,” the designer explained.

While the women’s looks were generally more wearable than some of the ready-to-wear Cardin has showed in recent years — no hoop dresses this time around — his men’s wear was almost uniformly outlandish, with disco-era velvet jackets and pants, sequined tunics and a trio of baggy colored satin pants.

Seated in the front row, Cardin kept up a running commentary throughout the 40-minute show, gesturing to models to lift their arms and twirl for the camera.

“If your feet hurt, you can put your shoes in the bag,” he noted, as a model in a black satin cape showed off an oversize evening bag with hoop handles. She duly pulled out a gold shoe from inside the bag to prove his point.

Surrounded by well-wishers including the perennially stylish Maryse Gaspard, who oversees the house’s couture division, Cardin said he hoped his creations would help sustain the local fashion industry at a time when the French economy is stalling. “If you make dresses at this level, rich women buy them. We have to get rich people to spend their money. People need to make a living — that’s the message,” he said.