Former employees and acquaintances attended an intimate service in the crematorium of Père Lachaise cemetery in Paris. 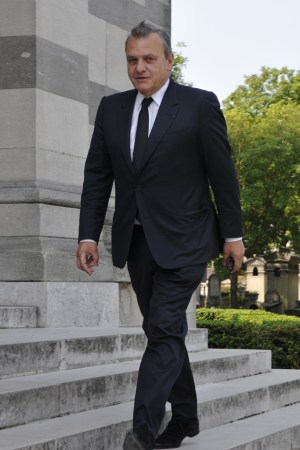 PARIS — Whether in his professional or personal life, according to those who knew him well, Jean-Louis Scherrer had a way of lighting up those he encountered, creating a special “spark” that brought out the best in others.

That word arose several times in tributes to the designer — who passed away June 20 at age 78 — given by former employees and acquaintances at an intimate service in the crematorium of Père Lachaise cemetery here Wednesday.

Didier Grumbach, president of the Chambre Syndicale, French fashion’s governing body, led the tributes, describing Scherrer’s career and the troubles faced by the house that bore his name. “I’m sorry to tell stories that are not very personal, but his work was important to him. Jean-Louis was very attached to his profession,” he said.

To the left of the pale wood coffin stood a giant bouquet of white roses with a ribbon across it reading “Fondation Pierre Bergé” bearing witness to Grumbach’s statement. Scherrer worked with Bergé’s business partner, Yves Saint Laurent, at Dior in his early days as a designer.

“Scherrer has left a trace [on fashion], like Ungaro, like Saint Laurent. It is inscribed in history,” said Jean-Charles de Castelbajac, describing Scherrer as a man with “a huge heart.”

“He was an exemplary man, very courageous, he had that tenacity a designer needs, because talent is not enough, you also need determination,” he added. “That was something that you also found in his silhouette, in his work, the precise silhouette, the narrow bust, the pointed shoulders.”

“He was one of the last representatives of the great era of couture, of elegance, opulence and refinement,” said Stéphane Rolland, who designed Jean-Louis Scherrer couture collections for a decade starting in 1998.