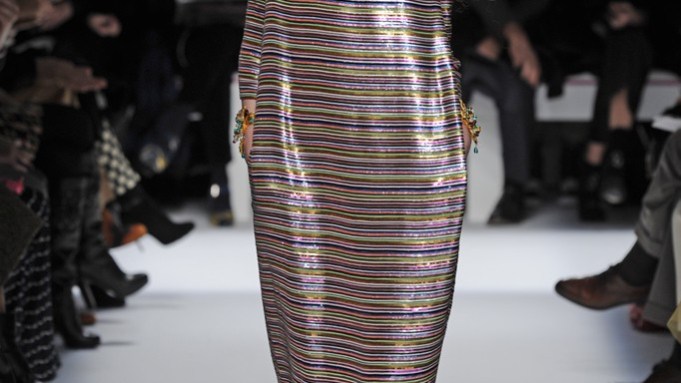 PARIS — The revival of Schiaparelli is finally gathering steam.

It was one of the most talked-about collections during Paris Couture Week, with creative director Marco Zanini receiving critical plaudits for his debut effort. “We have a full schedule of appointments for clients already,” he said in an interview. Farida Khelfa, a spokeswoman for the house, also cited a slate of invitations to bring the collection to other cities for order-taking and special events.

But on Monday, the buzzed-about couture moment was becoming a distant memory for Zanini, knee-deep in fittings in Milan since Friday for another Schiaparelli collection he’s to present in March during Paris Fashion Week.

Diego Della Valle, who bought the trademarks and archives of the late Paris couturier in May 2006, may have taken his time reactivating one of the most revered names in 20th-century fashion, but he’s making up for lost time. Della Valle has dubbed Zanini’s next effort “prêt-à-couture.”

Zanini described it as a “very high-end” range of ready-to-wear that will be sold exclusively at Schiaparelli’s Place Vendôme salon and offering levels of service similar to couture. While he wouldn’t get into design specifics, Zanini said he plans to propose a “complete wardrobe” for everyday life, whereas his couture is to remain about “very special items” that are “real and wearable” yet “very dreamy and full of fantasy.”

Della Valle ignited the Schiaparelli revival project last year, tapping acclaimed couturier Christian Lacroix — now focused on stage costumes and hotel design — to create 18 dresses as a onetime tribute to the late Italian designer Elsa Schiaparelli. They were displayed at Les Arts Décoratifs in Paris during July’s couture week, but never offered for sale — much to Khelfa’s chagrin. “I would love to have one of those outfits,” she said on Monday.

Famed for the shocking pink color and fashions with a Surrealist touch, Schiaparelli was seen as a key rival of Gabrielle Chanel in the Thirties and known for designs heavily influenced by Surrealist art, such as her Shoe hat and Lobster dress. She closed her Paris house in 1954 and died in 1973. Dormant for decades, the brand gained major exposure in 2012 when New York’s Metropolitan Museum of Art hosted the exhibition “Schiaparelli and Prada: Impossible Conversations” at the Costume Institute.

And now it’s up to Zanini, an Italian designer who cut his teeth at Versace, Halston and, most recently, Rochas, to interpret the storied name. Rather than reference Schiaparelli’s design legacy directly, Zanini said his guiding light would be the woman herself: cosmopolitan, witty, irreverent. That means waving the flag for fashions that are unconventional and nonconformist.

His spring couture collection included such unusual styles as a striped T-shirt dress in micro sequins, an off-the-shoulder gown in a loud medallion print and reversible evening jackets, one side with ruffles or feathers around the hip line, which create a peplum effect on the other side.

Needless to say, Zanini would be delighted if such looks would be embraced during awards season in Hollywood. “Of course, I would prefer to see more individuality on the red carpet,” he said. “I hope Schiaparelli, very humbly, could be a different choice.”

Khelfa suggested the unconventional credo applies to a business model that guards exclusivity over growth. “We want to keep it small and specific — and poetic, not too business minded,” she said. “We’re trying to do something different.”