Could Hedi Slimane end up back at LVMH Moet Hennessy Louis Vuitton? 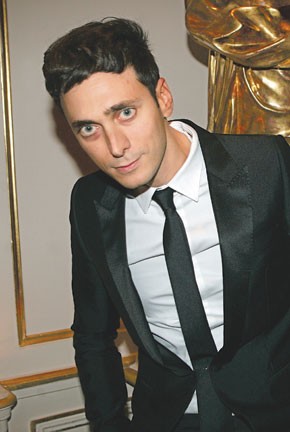 PARIS — Could Hedi Slimane end up back at LVMH Moët Hennessy Louis Vuitton?

The men’s wear star, who parted with Dior Homme in March, has renewed talks with LVMH chairman Bernard Arnault about the launch of a Hedi Slimane fashion house, industry sources said.

The likelihood of a deal could not immediately be learned. LVMH declined comment on Monday and Slimane could not be reached.

However, sources described the recent talks as serious, underscoring that the designer has maintained excellent relations with the luxury titan.

One of Paris’ biggest fashion stars, Slimane surprised the industry with his exit from Dior Homme, which under his creative tenure brought skinny tailoring and rock ‘n’ roll style back to the forefront of fashion, and electrified men’s fashion week here.

Slimane said he walked away from Dior “freely” after failing to reach an agreement about a Dior-backed Hedi Slimane house. Ownership of the Slimane brand name and control rights were said to be among the contentious issues during the initial talks.

But Slimane left the door open to reconciliation, posting a letter on his Web site shortly after exiting Dior Homme thanking Arnault for trusting him with the project. “I hope he will understand my position and decision, if not now, then hopefully with some time,” Slimane wrote.

While he has recently channeled his energies into his burgeoning career as an artist and photographer, Slimane is said to be eager to get back into the fashion game with an independent label.

But it appears Arnault might not be alone in Slimane’s web of intrigue. The designer is rumored to be talking to Diesel’s Renzo Rosso about possible backing as well. Besides owning Diesel, Rosso backs Martin Margiela and Sophia Kokosalaki, among other businesses.

For his part, Arnault is said to want to lure Slimane back into his stable of fashion stars, prizing the 39-year-old’s design prowess and wide-screen brand vision.

An art history graduate from the Ecole du Louvre, Slimane burst onto the fashion scene in the late Nineties as the men’s wear creative director at YSL, earning standing ovations for collections that were seductively androgynous and crackling with modern energy.

In 2000, he resigned from YSL and accepted a job offer from Arnault, showing his first Dior Homme collection in January 2001, injecting the brand with buzz and a strong youth appeal.

Since then, many retailers have queried about a Slimane women’s line, since he already enjoyed a cult female following, having dressed the likes of Madonna, Charlotte Rampling, Linda Evangelista and Nicole Kidman.

Meanwhile, Dior Homme’s new designer Kris Van Assche is readying for his runway debut for the French brand on Jan. 20.