All the latest fashion and beauty coverage from Paris. 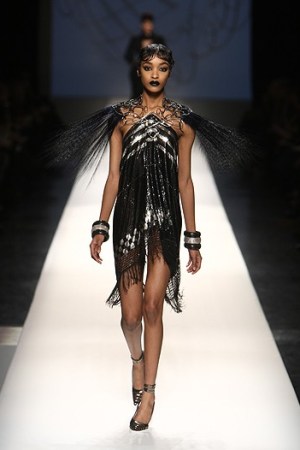 ALEXANDRE VAUTHIER: It was the influence of Vauthier’s former mentor Thierry Mugler that showed in this collection, namely in the gimmicky pagoda-shoulder leitmotif.

ALEXIS MABILLE: Mabille is one of fashion’s brightest young lights, one with a strong understanding of French chic and a penchant for witty riffs on his-for-her and vice-versa.

ANNE VALERIE HASH: Hash built her calm and collected, black-and-white couture collection on the label’s classic bestsellers: the tuxedo and the wedding dress.

AVALON VEGA: Samuel François and Daniel Fumaz’s  heroines were as sweet as a bag of candies, with taffeta and organza dresses swirling on their bodies like sugar sculptures.

CHANEL: When most people have a good idea, they put it down on paper. Karl Lagerfeld cuts it out of paper. At least that’s what he did for his spring haute couture collection, a show brilliant in more ways than one.

CHRISTIAN DIOR: John Galliano is a master deconstructionist who can impose his way on a concept as remarkably as on a piece of cloth. His couture lineup was a dazzling collection rooted in New Look extravagance yet inspired by the Dutch Masters.

CHRISTIAN LACROIX: Lovely though it was, Lacroix’s lineup was just dresses, lacking the sense of passion and otherworldliness that makes his best work transcend fashion and approach art.

ELIE SAAB: Elie Saab introduced a Japanese element to his couture, offering a kimono jacket here and an obi sash there.

FELIPE OLIVEIRA BAPTISTA: The designer continued his foray into sharp, architectural tailoring, this time using the idea of speed and planes as a canvas for a more aerodynamic silhouette.

GIORGIO ARMANI PRIVE: The collection Armani presented on Monday evening was particularly puzzling. The biggest problem was neither the politics of the message nor the absence of the kind of brooding romance that might have hooked us in. Nope. It was those shoulders.

JEAN PAUL GAULTIER: Sharp lines and rapturous curves — they comprise both calligraphy and couture. So perhaps it makes sense that Jean Paul Gaultier, a master at working a theme, connected the dots.

MARCO DE VINCENZO: Marco De Vincenzo made a promising debut with a collection of body-conscious looks treated with a fabulous range of optical effects.

STEPHANE ROLLAND: Since he founded his own couture house a few seasons back, Stéphane Rolland has embraced a sleek, glamour-puss look.

VALENTINO: The clothes were impressive, lacking neither flourish nor couture-quality craftsmanship. But they could have been sourced right from the house’s archive.

PLUS BACKSTAGE BEAUTY COVERAGE FROM THE SHOWS:

A Modern Classic Look at Valentino »