Armed with well-defined goals and a modernist take on couture, Bouchra Jarrar is focused on growing her fashion house. 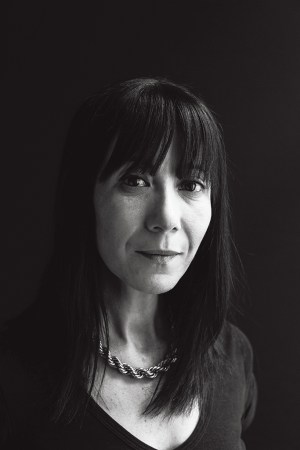 And with a tremendous sense of purpose. Right now, that purpose focuses squarely on growing the fashion house Jarrar opened five years ago after 15 years of behind-the-scenes toil, most notably as studio director at Nicolas Ghesquière’s Balenciaga and couture head of design for Christian Lacroix in the late years, through to his last collection.

Jarrar dared embark on her own, not in the press-obsessed world of high-end ready-to-wear in which youthful entrants-with-a-buzz often feel obliged to grow as much and as quickly as possible, but in couture, an oeuvre dominated by major names. Unfazed, she determined to start quietly and grow at her own, carefully considered pace with a razor-sharp view of what couture in the 21st century should be — real, wearable, for the everyday lives of ultrachic one-percenters. That has meant a daywear focus built on mannish, precision tailoring with couture constructions, luxe fabrics including signature hand-wrought tweeds and increasingly, traditional trappings of haute flourish — embroideries and feathers — applied with fascinating modernist stealth. “Couture should be accessible to a real woman who lives in the real world,” Jarrar says.

Yet Jarrar is no haute romantic; commercial viability has always been her goal. Now, her foundation established, she’s in full-on, if disciplined, growth mode. That includes increased attention to couture eveningwear, which she acknowledges is a necessity, and to her rtw, inclusive of pricing. Perhaps most important, she’s close to hiring a chief executive officer, a major step in developing the commercial support she needs, while allowing her to focus on her strength, the process of creating.

How do you see your role in fashion?

I don’t have a “role” approach. I found myself in this dialogue with the outside world.

My fashion resonated and it’s on this feedback from the outside world that my house is built. It’s a relationship with women in general, being the press or the public, and it’s a very pragmatic exchange.

How do you describe your look, your overall aesthetic?

For me, fashion is first and foremost a matter of proportions — the lines and the cut. My objective is a defined look because our lives today are very fast, we are working women, we’re strong, we’re self-sufficient, and my clothes have to bring something — power, but without being aggressive, a defined look. It’s a look, it’s elegance, it’s Paris. It’s really an attitude.

Where does your inspiration come from?

I’m lucky enough to live in a very beautiful city. I was born in Cannes and when I was 17 I came to Paris to visit with relatives, and I said to myself, this where I want to live.

Did you grow up in a creative environment or in a fashion-aware family?

Not at all. My dad built houses. He arrived in France in 1958 from Morocco, from Fez, and it was the period when France needed manpower and was calling on foreign workers. He was part of the first wave of immigrant workers who rebuilt France. He went [back] to get my mother in 1970. We were very lucky because we ended up in Cannes on the Riviera in the Seventies.

There’s no sense of Seventies’ nostalgia in your work.

Not at all. I think that what I retained from my childhood was having the sea, the beautiful sun, the countryside not far away. What I kept from all this is an amazing warmth. Yes, my house, my family, but also the surroundings. There were always fireworks.

Were you aware of Cannes’ glamour image growing up?

I was aware of it, but I found that world complicated. I can still see my sister running after the actors to get autographs, and I would be looking at her thinking, what’s going on? This was not the stuff of dreams for me. It was when Cannes went back to being a quieter place, when nature showed its strength again. I can appreciate glamour, as long as there are women who, apart from what they wear, are mindful, spiritual women.

You didn’t think then, “I want to dress women or the red carpet”?

No, no. It’s not reality; it’s not real life. But I know it’s important for my brand. What I don’t like in this system. I get calls from stylists. If I don’t meet the actress, it doesn’t interest me…I know I’m part of a system and the system works like that. Nowadays everything is bought, the actress is bought, so why should my clothes be sent? I am sorry, but I say it like it is. Why should I pay for transportation costs? On the other hand, if an actress really wants my clothes, and if I like her mind-set before her physique, I’ll go for it with pleasure.…I have nothing against the system, but I prefer to finance my company, my creations.

You’re ready to take the business to the next phase.

It has been five years that I have been building a strong foundation for the house.…Now my goal is to apply the creative and production excellence to develop a business.

Your move to this beautiful new space was strategic, correct?

My clientele is international, and I think that the proximity with the luxury hotels is important because I want to build and develop a business with private clients. I want to have a showroom where the collections are always displayed, and where I can meet with my clients.

You’re looking to integrate the couture with the ready-to-wear in terms of sales?

I don’t see the couture client as only wearing couture. She’ll buy the couture coat, but she’ll buy the sublime pair of rtw pants, the rtw trench. This is what interests me, to propose a completely mixed silhouette. When Mouna Ayoub buys, she buys rtw and couture. I see both things together.

What are some of your key stores?

In Paris, L’Eclaireur and there’s the spot at the Bon Marché, both have an international clientele; there’s Montaigne Market as well. In the United States, it is a priority that we be present in a department store.

You were in Bergdorf Goodman for a while, but no longer. What happened?

I think that this growth was not nurtured. I am responsible for this, too. It’s important; it was a source of pride to be in Bergdorf Goodman. But professionally it was important to work with them, to be present, coming often, thinking about the customer. That’s how everybody does it, but we did not come out at all.

What I like in the Americans is the very straightforward relationship, and you can build on this. There are no fences, no taboos, no unsaid things. I am going to do anything possible to make this possible because this is the market for the brand.

I believe my aesthetic is in line with the American woman. The American stores were the first to believe in me, and I really am working very hard to make sure I have a strong commercial department to service them.

There are some boutiques that retail me very well: Mme. Ikram Goldman of Ikram, Paola Russo of Just One Eye, Capitol, A’maree’s. I want to personally thank them; they have supported me always. But it’s not enough for the brand….Department stores are a beautiful platform for visibility.

Many territories/countries still are untouched, and for this reason I need to have a very strong commercial department….The focus is also going to be in Asia and the Middle East.

Money Finance invested in your house a while back.

They are still there. I own 74 percent of my company and BPI France is my partner.

Are you actively seeking additional investment?

I am in that dynamic of developing my business, and I have started some conversations. To develop my house, I definitely need to have investors who believe in the brand and support me to develop the strong business that I have in mind.

Yet you want to retain a majority stake.

I’m in no hurry; I’m not looking for an investor at all costs. I say without pride, that I’m astonished at where I am today. But for five years I did nothing but build and lay the bases. I need to take the time to do things well, and I’ll be the happiest woman if my story is a story of independence.

How is the ceo search going?

We have identified someone. However, I am waiting for my partners to help me to get this key professional talent with whom I have a very good complementary chemistry. Once I hire a ceo, I will be able to focus on creating the collection and work on product development.

You did a bag at one point. How interested are you in developing accessories?

Because the house was not at all ready. Before I release a line of bags, I’m going to spend time. But if I don’t have the marketing plan for what I am preparing, it’s not worth my wasting time. There was no marketing plan, so I prefer to erase it and start again. This is why it’s important that I surround myself by true professionals on the commercial side, people who would prepare the ground beforehand.

I find that there are so many bags: everybody does so many bags….There’s no point in doing bags if I don’t have an advertising strategy. For me, the product I’d like to develop next is a fragrance.

Have you been approached?

There are some people who want to meet with me.

The marketing and the advertising are on the partner with the money.

I think that the name Bouchra Jarrar evokes a line of clothes, it has recognition, and it would be easy to add a fragrance to it, but not a bag.

Very simple, and orange blossom in it. The bottle, very simple, elongated, very elegant, not complicated. But also a bottle that you can slip in your bag, an everyday-use format.

Do you look forward to new challenges?

I have plenty of ideas, and I would like to go further in creation. Also, I am ready to open up to new universes that I feel strong and peaceful enough to explore.