Valerie Steele, director and chief curator of The Museum at FIT, enjoys telling the story of how she persuaded Tim Long, curator of costumes at the Chicago... 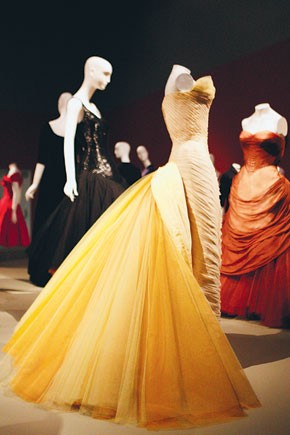 Valerie Steele, director and chief curator of The Museum at FIT, enjoys telling the story of how she persuaded Tim Long, curator of costumes at the Chicago History Museum, to let her borrow some of his more fragile items for “Chic Chicago: Couture Treasures From the Chicago History Museum.” “I can’t give you that — it has ‘bead disease,'” he said of a black Chanel evening dress that was shedding its ornamentation.

“Our conservators will take care of it,” she said — and got it. The FIT museum, of course, has two conservators on staff who were able to fix the black beaded number and any other fraying pieces, such as a splendid Worth tea gown, that she wanted.

The current show, which will run at FIT through Jan. 5, features them and many other more robust items from the remarkable costume collection of the Chicago museum, spanning a period from the late 19th to the late 20th century, with items from the Gilded Age particularly well represented. There are Forties and Fifties evening dresses with sweeping skirts and trains, which are signature Charles James pieces as well as a 1937 jacket by Jean Cocteau for Elsa Schiaparelli, detailed with a trompe l’oeil figure of a woman and her hand. There is also a stunning polonaise by the now-forgotten Emile Pingat, with a jacket like a long brocade frock coat over a beautifully detailed underskirt, ordered in 1878 by a certain Abby Spencer, soon to become the splendidly named Mrs. Augustus Newland Eddy. The last is the item in the show that Steele says she covets most. Each of the costumes, in fact, evokes an era and, often, the person who wore it, for such occasions as a presentation at the Court of St. James. There’s a collage of photos of the original owners at the beginning of the exhibit.

The overall effect is striking, and some of the items have rather droll backstories. The Chicago museum has more than a dozen dresses by James, whose mother was from the Windy City, most donated not long after they were originally worn. In the “Chic Chicago” exhibition program, Steele speculates that this is because the ultradramatic numbers, with their vast, sculptural skirts, were so complicated to store.

Paul Poiret, arguably the greatest designer of the Teens and a notoriously difficult character, was incensed when his sister Nicole Groult decided to enter the profession, too. When she did so, he broke with her, reportedly saying, “She used to be my sister.” In 1986, The Musée de la Mode et du Costume in Paris put on a show, “Maitres de la Mode Art Deco,” that featured the work of both. “He would have had conniptions,” says Steele of Poiret. In the FIT presentation, a surprisingly simple Poiret coat is featured, and Groult is represented by a satin gown. Meanwhile, when Clare Booth Luce donated a full-skirted, red-and-black Balenciaga evening ensemble, it arrived complete with its original 1955 bill for $1,500.

The idea of doing a show that used the Chicago museum’s holdings came about by chance. Steele had wanted to do an exhibition on Lanvin, but it didn’t pan out, partly because of Alber Elbaz’s schedule, so she began looking at the collections of other institutions with an eye to selecting from several of them. When she examined what the Chicago History Museum had, however, she decided to focus solely on its trove. As it turned out, Long’s way of coming at fashion is to examine it in relation to the important movers and shakers in Chicago, and Steele’s is to focus on the designers who were the pivotal figures in advancing and changing their metier. So it wasn’t difficult for the curators to meld their two approaches.

“I think that Chicago was a city full of people making money and who were really interested in contemporary life, culture and architecture, a fashion-positive city,” Steele says. “You wore it in settings designed to show off high fashion. Buyers for Neiman Marcus could tell you that there are other places as important as New York for the promotion and consumption of fashion.”