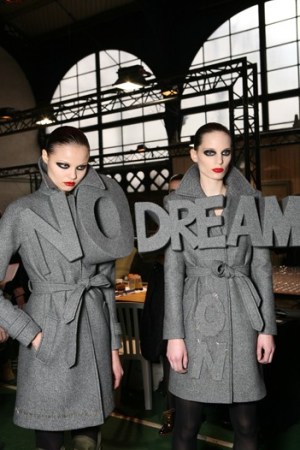 Renzo Rosso, the Italian industrialist behind Diesel, has acquired a majority stake in the Dutch designer firm with ambitions to build it into one of the “top reference fashion houses of the future.”

Financial terms were not disclosed, but Rosso told WWD that he plans to make major investments to bolster the duo’s ready-to-wear business, add licensed products such as eyewear and jewelry and open freestanding stores in high-visibility locations.

“It’s a new chapter to start building onon the brand and to focus on creativity,” said Rolf Snoeren who, with Viktor Horsting, began staging fashion performances in Paris in the Nineties, ultimately launching a couture collection in 1998 and rtw in 2000. “We needed to team up with a strong partner to realize our dreams.”

WWD first reported that the designers were in talks with Rosso in September 2006, and the time it took to reach an agreement underscores both the complexity of fashion deals and the onerous workloads of designers, leaving little time for negotiations.

“It’s like a marriage: You have to be sure you have the right partner,” Snoeren said. “What we like most [about Rosso] is his openness toward creativity and out-of-the-box thinking.”

Rosso said he likely would pursue a similar business strategy at Maison Martin Margiela, which his Only the Brave holding acquired in 2002. The pairing of the flamboyant Rosso and the secretive Belgian designer initially raised eyebrows, but has turned into a successful partnership. Consolidated revenues at Margiela vaulted 50 percent last year to 60 million euros, or $82.2 million at average exchange.

Snoeren said Rosso’s nimble handling of Margiela was a “key factor” in partnering with the Italian.

“He has shown with Margiela what he can do. The business has grown substantially and he kept the DNA of the brand. It’s a win-win situation,” Snoeren said. “But of course we are completely different from Margiela, and this is what he understands.”

Snoeren said he and Horsting held talks with other potential partners. Although he declined to identify them, Snoeren stated: “We noticed a lot of business people fear creativity, whereas for [Rosso] it’s a challenge.”

Starting with the fall-winter 2009 season, Staff International, Only the Brave’s manufacturing and distribution arm, will hold the exclusive worldwide license for Viktor & Rolf’s women’s and men’s collections of clothing, shoes and accessories. According to market sources, revenues at Viktor & Rolf are approximately 10 million euros, or $15.8 million at current exchange.

Rosso declined to give volume projections, saying his first priority would be to expand the product offering in rtw, ensuring the collection is complete across classifications. He noted a dedicated team of 15 from Staff already has been assigned to the task.

However, brand extensions are in view via licensing agreements. “To be a brand today, you need to produce all the products a person can wear every day,” Rosso said. “It can be jewelry, watches, everything: bags, shoes and accessories in general.”

Rosso said a network of boutiques also would be an ingredient in his expansion plan, “but you cannot open a store with just a few items.”

Viktor & Rolf operate one freestanding store, a 750-square-foot unit on Milan’s Via Sant’Andrea with an upside-down decor: parquet on the ceilings and chandeliers sprouting out of the floor. The store opened in 2005.

Revenues last year at Only the Brave surpassed 1.3 billion euros, or $1.78 billion at average exchange.

“My idea is to build one of the most modern [fashion] groups for the future,” Rosso said, calling Viktor & Rolf emblematic of what he labeled “new luxury.”

“They are much more modern, close to the new young mentality,” he explained. “I believe much more in the new luxury that is less expensive, more approachable for the new upcoming consumer.”

Snoeren said he hoped the partnership would release him and Horsting from excessive business pressures, leaving them free to focus on design.

“What we noticed working with L’Oréal [their fragrance licensee] is that a good business partner can bring opportunities that we ourselves could never realize,” he said. “We want to achieve the same thing with the ready-to-wear.”

The designers’ frustrations with the endless deadlines of fashion were voiced loud and clear on their fall-winter runway, with clothes that literally said “No” in their latest statement-making spectacle.

Two of fashion’s consummate showmen, Snoeren and Horsting are acclaimed for their conceptual and witty approach to fashion, incorporating elements such as fog, black light and makeup, pyrotechnics and cinematic blue light technology into their shows.

Childhood friends, they started collaborating after graduating from the Netherlands’ Arnhem Academy, initially taking an art-based approach that didn’t always garner much attention. The designers were once so frustrated with the lack of notice they received from the press that they staged a strike in lieu of a collection — plastering Paris with posters announcing the fact.

They catapulted onto the international fashion scene when they started showing during Paris Couture Week, mounting spellbinding shows featuring clothes shaped like atomic-bomb clouds, decorated with foot-deep ruffles or covered in thousands of bells. For their Russian Doll collection in 1999, the designers dressed tiny Maggie Rizer rotating on a turntable in nine layers of crystal-studded finery.

In recent years, they’ve layered on more serious business components, launching men’s wear in 2003 and two signature fragrances, Flowerbomb and Antidote, with L’Oréal. In 2006, they teamed up with Swedish fast-fashion giant H&M for a onetime collection.

Still, the designers recently have struggled to make the leap to fashion’s big leagues.

“We cannot do everything ourselves,” Snoeren said, calling “a better product” the firm’s first priority. “This is all a question of having the right partner with the force, the power and the know-how to do it.”

Snoeren listed eyewear, bridal and jewelry among his wish list for brand extensions, and noted that eveningwear would be an immediate expansion priority.

And he did not rule out an eventual return to couture. “It’s definitely something we would like to do,” he said. “Who knows? We come from couture and this is something we cherish.”�