Fine jewelry has a new reality — with brands, retailers and consumers adapting to elevated prices in the sector. 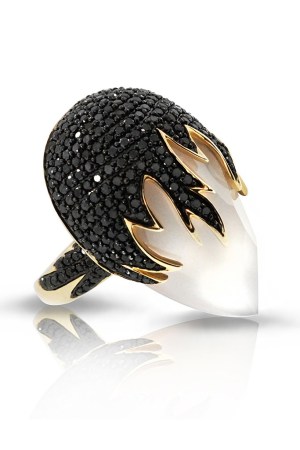 Fine jewelry has a new reality — with brands, retailers and consumers adapting to elevated prices in the sector.

That’s not to say that higher prices have had a negative impact, but they have forced houses to innovate. Gold might have climbed to almost $1,900 an ounce last August, but there’s still an abundance of gold necklaces, earrings, rings and bracelets that will be on display at the Nielsen Jewelry Group-produced Couture show.

Materials prices skyrocketed last year with gold leading that charge (surpassing even platinum), but the precious metal has dropped in price in recent months — falling from $1,740 Feb. 1, to $1,714 March 1, to $1,677 April 1, to $1,664 May 1. Contrary to projections that the precious metal would surpass $2,000, this marks the first time gold prices have decreased for a consecutive three-month period since May 2000, but it’s also about the time experts speculated that last year’s surge would start to be felt industry-wide.

Such has been the case at Kwiat, according to Greg Kwiat, chief financial officer of the company and chief executive officer of Fred Leighton, who contends that the dramatic increase in gold and diamonds that occurred last year is just now filtering through to jewelry prices at retail.

“The volatility of commodity pricing, including gold and diamonds, has been one of the biggest challenges over the last year. Most jewelry-related commodities are down from last summer’s highs, but we are still keeping a close eye on how to properly price the collection,” Kwiat said. “The challenge this has caused is that the merchandising and price-point mix has shifted in a way that puts certain styles out of reach for the target customer.”

Despite increased prices, the category continues to perform well at retail, according to Kurt Salmon retail strategist Nancy Liu.

Case in point: Ippolita, a 13-year-old company, has seen massive growth over the past several years — a 500 percent increase overall since 2008 — and has plans for a significant retail rollout within the next three years, as reported by WWD in April. According to ceo Joe Cavalcante, the company will unveil five collections at Couture this year.

“We have…introduced Ippolita Notte, a mix of gold with black rhodium, which offers a luxurious look at an interesting price point,” Cavalcante said. The new line is priced considerably less than the company’s group of all-gold offerings. For example, a necklace in the all-gold range sells for $16,500 while a similar style in the Notte line retails for $2,495.

Rosanne Karmes, founder and designer of Sydney Evan, which marked a decade in business this year, will attend the show for the second year. She maintains that the brand saw 30 percent growth from 2010 to 2011 and projects 20 percent growth this year. The line retails from $300 to $40,000 and is carried in 180 doors worldwide, including Bergdorf Goodman, Neiman Marcus, Holt Renfrew and Harrods. Perennial bestsellers are diamond beaded bracelets that launched in 2003; an evil eye and hamsa line, and her signature “love” necklaces and rings. At Couture, she will launch her Shy collection — which like Ippolita, is Karmes’ attempt at delivering on-brand fine jewelry, but with smaller pieces that are less costly.

So while the good news is that gold has come down a bit in price, it is still significantly more expensive than it once was. And this has compelled brands and designers to keep innovating in the metal arena, both designwise by incorporating more silver (such as the case with Ippolita’s gold and rhodium range) and by developing new alloys (like Tiffany & Co.’s new rose-hued Rubedo metal introduced this year in honor of its 175th anniversary).

“People have settled into the mentality of ‘This is our new reality and let’s work with it.’ There’s just so much silver you can substitute. The 14 karat and the alloys will be a strong player for that reason,” said Janice Winter, ceo of Luxury Brand Consulting, who predicts the movement toward adopting new alloys will just get stronger.

“No one is selling gold rope chain anymore. That is over,” said Whitney Sielaff, editorial director of National Jeweler, a Nielsen Media Group-owned company, noting that the recession turned silver — traditionally considered a bridge metal that jewelers hardly used because the prices were so low — into a key player in the sector.

“At this point, designers, even the heavy hitters, have silver lines that have matured and diversified,” he added. “That was one of the big moves and that’s not a real shock to anyone [anymore].”

Traditional fine jewelry brands working with silver, such Yossi Harari and Slane (also showing its 15th anniversary collection), was a trend that gained momentum last year and seems to have staying power — but it’s the use of color, most notably stones in vibrant greens or tangerine, that’s shaping up to be this year’s runaway trend from a design perspective. (Pantone named Tangerine Tango its 2012 color of the year.)

Janet Goldman, ceo and founder of Fragments showroom and jewelry boutique, credits the resurgence of emeralds and like-colored stones to Angelina Jolie wearing a pair of $2.5 million, 115-carat Colombian emerald drop earrings from Lorraine Schwartz (and matching 65-carat ring) to the 2009 Oscars.

Designer Irene Neuwirth contends that about 75 percent of the collection she’s introducing at the show contains green stones in some shape or form, whether it’s emeralds, green tourmaline, green opal or her signature, chrysoprase. This year, Neuwirth crafted about 120 one-of-a-kind pieces that range from $1,500 to $200,000, including 18-karat white gold earrings set with 64.32 carats of emeralds, 4.76 carats of rose-cut diamonds and mint chrysoprase that retail for $61,000, as well as a yellow gold and diamond cuff with two mint chrysoprase trapezoids that retails for $22,900.

Carelle’s owner and designer, Chana Regev, has incorporated emeralds into her work since she started designing and producing private label fine jewelry in 1977. Since then, she launched her namesake brand and started producing directly for the end consumer.

Despite rising prices and uncertain economic times, the company has seen steady growth, which Regev believes is due to maintaining a focus on 18-karat gold and not shifting to alternatives like silver or leather to cut costs and compete for consumers. She said 2010 and 2011 saw a combined 22 percent increase in business and, based on current figures, she projects 30 percent growth for 2012.

Carelle retails from about $1,100 to $25,000 and is carried at stores including Nordstrom and Bloomingdale’s — and although this current collection doesn’t include emeralds, Regev has incorporated a bevy of other green stones: green quartz, green tourmalines, tsavorites (or green garnets) and peridot.

Then there are black diamonds.

Initially, the material received a welcome that was tepid at best from the industry and consumers — but it’s only recently that the precious stone has helped create a new “fashion-forward fine,” according to Phillips Frankel, director of finance and operations Derek Frankel. He calls black diamonds the bridge between traditional fine jewelry and this more forward-thinking, modern component within the category. And although the precious stone has gone mainstream, especially in the past year, black diamonds have played a heavy hand in the brand’s offerings since its inception in 2010.

For Phillips Frankel, presenting its collection at the show for the first time, January through May’s business is up 300 percent so far from the same time last year, and the company has seen growth of more than 200 percent in the last 12 months. He credits the decision to bring its sales team in-house, along with a hands-on approach when it comes to working with retail partners, as instrumental in the brand’s success.

“We consider black [diamonds] a bridge — it’s not our focus — but we look at it because it helps the customer understand where we are taking them when they’re going on this jewelry shopping journey. It helps let a less fashion-forward customer know she’s looking at fine, just in a different way, and black diamonds are a great bridge to get them there,” Frankel said.