Here are five emerging brands taking a bow at the Couture jewelry show, May 31 to June 4 at the Wynn Las Vegas.

By Rachel Strugatz and Alexandra Steigrad on May 21, 2012
View Slideshow 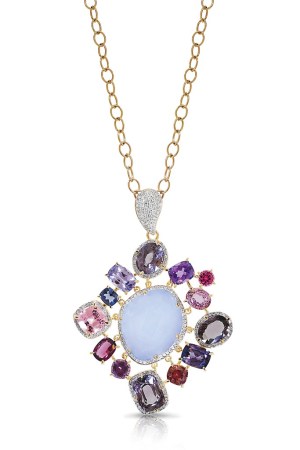 The label, available in 40 doors including London Jewelers and Harrods, will exhibit its fine jewelry for the first time at the Couture show. The company has expanded upon its core of delicate gold and diamond button bracelets, diamond stackable rings, pavé diamond pendants and elegant semiprecious stone offerings with four new collections for this show.

A $12,000 pendant from the Wildflower line — made of yellow gold, diamond, spinel, chalcedony and black mother-of-pearl and inspired by Tim Walker’s photograph of Eglingham Hall with balloons — is the collection’s show stopper, but a gray agate ring blanketed in a black diamond “flame” from the Elements collection is another standout.

There are also plenty of geometric references, orange sapphires, unlikely color combinations, even more leopard jasper (a favorite semiprecious stone of the Frankels that they’ve paired with rubies for the first time), and an emphasis on prongs.

“Too often, the goal with structural elements (like prongs) is to simply hide them. In many cases, I feel that’s a missed opportunity to add something beautiful and signature to the piece,” Danielle Frankel said of the new prongs designed in the shape of the petals from the brand’s logo. “They should be viewed as another aesthetic component of the overall piece — not a separate structural requisite — to blend fashion with function and add to the design, as well as to bring our signature to the forefront of the piece.”

Talk about a career swap. Chinese born Vanessa Leu was a journalist in Taiwan covering issues such as the dire living conditions of Taiwanese aborigines until she relocated to the U.S. in the mid-Eighties, enrolled at the Gemological Institute of America and took up jewelry making.

Although she’s been designing for quite some time and received the JCK Rising Star award in 2010, this is Leu’s first cohesive collection — and her debut at the five-day Couture show. Her sculptural pieces range from $900 to $36,000 and mostly comprise rose and blackened gold, diamonds and gemstones, such as a $36,000 pair of trillion-point earrings with morganite and black diamonds set in 18-karat white gold and black rhodium — all created with reclaimed metals, eco-conscious materials and conflict-free diamonds.

Leu said she is artistically inspired by the works of classical Chinese painter Bada Shanren and calligrapher Huai Su and spiritually influenced by her lifelong practice of Zen and philosopher Lao Tzu — which also inspires her to use only manufacturers with ethical labor practices.

Americans might not be familiar with Octium, the fine jewelry brand launched by Kuwaiti power couple Fahad Al-Hajri and Alanood Al-Sabah, but that’s about to change.

Making its debut at Couture, the two-year-old brand includes Series I, a rose gold and diamond collection, and Series II, a yellow gold and diamond-encrusted line. Retailing for between $1,900 and $10,000, with most pieces between $4,000 and $10,000, both groups nod to the shape of a slanted octagon, as well as the number eight.

“I was born on Aug. 8, so the number eight is symbolic to me as well as prominent in various cultures around the world. The number eight symbolizes health and prosperity, and is also a prominent figure in Islam,” said Al-Sabah, who is also a Kuwaiti princess and a first cousin of Sheikh Majed Al-Sabah, the nephew of Kuwait’s Amir and founder of the Villa Moda luxury mall in Kuwait. “We researched every brand on the market and found our shape, the tilted octagon, to be original — which is so difficult to do.”

The brand released Series I in 2011 during Paris Fashion Week, and later at Harrods in London, before showcasing it at the Octium boutique in Kuwait’s 360 Mall.

“The initial design process is a very special time for us,” said Al-Hajri, who explained that the company operates a small workshop in Kuwait. “We sketch our ideas and review them together before getting anyone else involved. Once we feel the ideas best reflect our vision, we pass them on to our in-house designer, who manufactures the piece or collections.”

Some pieces are made in Hong Kong, the U.K. or Italy.

“Being involved in the creative process — with the evolution of even a single piece of jewelry being a learning [process] on its own — we design collections that appeal to cosmopolitan markets,” he added.

NEXT: Phyne by Paige Novick >>

Four years after the launch of her namesake contemporary jewelry label, designer Paige Novick will release her first fine collection, Phyne by Paige Novick, at Couture.

The collection’s prices range from about $1,500 to $12,000 retail. The sleek pieces offer a variety of metal finishes and contain mostly 18-karat gold, with diamonds and semiprecious stones such as labradorite, citrine and moonstone.

“While I hope people will recognize the same hand at play with respect to the use of asymmetry and clean modern design, the two collections are markedly different,” Novick explained. “Phyne is distinctly more feminine, delicate and razor sharp in its execution, whereas the main collection focuses on bolder, gutsy, statement pieces.”

She added that the idea of working with diamonds and gemstones had been “ruminating” for several years — she called designing in fine gold the “Holy Grail” — but she waited until the time and the manufacturing partner were right before producing this higher-end line.

Sitting at a cafe with a friend near the Trevi Fountain in Rome last fall, Alberto Petochi pondered his next career move.

Following a 13-year career at Roberto Coin, Petochi was ready to jump back into jewelry. Oddly it was then, while watching tourists toss coins into the fountain, that he came up with his next venture: a jewelry brand called The 1884 Collection.

But, he says, what makes 1884 unique isn’t just the use of the coins: The company invites every purchaser to register the new bauble along with a wish, so that a coin (and their wish) can be thrown into the Trevi Fountain. The firm records the coin tosses via social media sites like Facebook. The brand also recently partnered with the Make-A-Wish Foundation, and will provide children who have life-threatening illnesses a chance to travel to Italy.

“It’s something that people feel good about,” said Petochi, who explained that the company’s only problem is keeping up with its fast growth. He said the brand will “far exceed” its internal goal of $3 million in wholesale sales for the year.

“We will send a certain amount of families a year to Italy, no matter what our sales are,” he said. “The biggest challenge is there has to be a kid who wants to go to Italy — most want to go to Disneyland or the Super Bowl.”