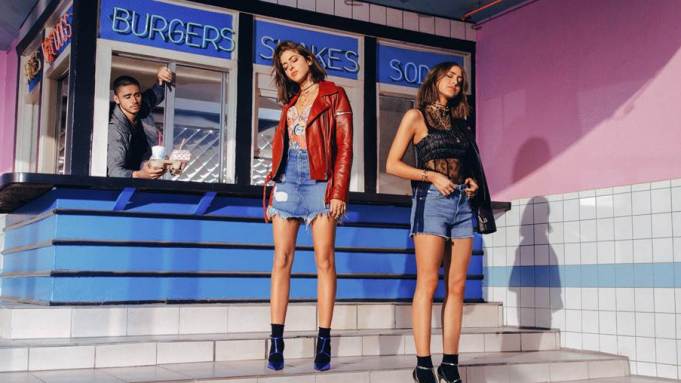 Los Angeles denim company Seven For All Mankind has enlisted the help of the twin DJ duo Sama and Haya Khadra, also known as Simi and Haze, for an upcoming campaign it hopes will create buzz around the brand.

The 17-year-old denim company, part of the premium denim wave that elevated jeans and price points in the early part of the decade, recognizes the changing competitive landscape in a campaign launching Friday with Seven For All Mankind, Splendid and Ella Moss chief marketing officer Jenna Habayeb, saying “the denim industry is a much different place and so is the digital and social space for that matter.”

“As a brand we want to be able to evolve to appeal not only to a younger audience, but also to inspire our current customers,” she said. “We’re really thinking about denim as the canvas of self-expression and will start highlighting different types of people to showcase their stories and style with Seven For All Mankind as the foundation.”

The Khadra sisters, known for their style and often seen with the likes of Kylie Jenner and Hailey Baldwin, are featured in the ads with Maverick McConnell, who is expected to appear in the upcoming “American Crime Story” focused on the murder of Gianni Versace.

Vintage-inspired styles, leather moto jackets and details such as detachable stirrups mark some of the women’s product featured in the campaign, while men’s is focused on what the company said are its top-selling Luxe Sport, Airweft and Luxe Performance jeans.

The pre-fall campaign will run on digital and social with marketing efforts ramping up into fall and holiday, according to Habayeb.

The executive team appears to be funneling big expectations into this campaign, seen as a kick-off in efforts to boost the brand.

“This is just the beginning of a whole wave of new things to come for Seven For All Mankind,” Habayeb said.

That was outlined by new parent Delta Galil Industries, which acquired Seven For All Mankind and its sister brands Splendid and Ella Moss, last year for $120 million from VF Corp. The three contemporary brands form the DG Premium Brands division, which its parent marked for growth via a number of initiatives, including improvements in stores, production and the wholesale business.

The company said last month it began an executive search for a leader to head up the division after the departure of former chief executive officer Paula Schneider.

At S.M.N., Being a Premium Denim Brand is Way to Disrupt