A First Look at Fabulosity

Kimora Lee Simmons' Fabulosity brand of junior apparel may not carry the same supersexy look as Baby Phat, but it has the same elements of trendiness. 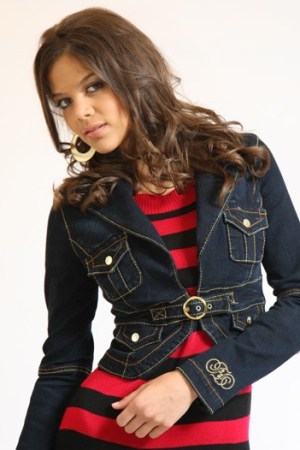 Kimora Lee Simmons’ Fabulosity brand of junior apparel, which will launch exclusively at J.C. Penney stores this month for back-to-school, may not carry the same supersexy look as its sister label, Baby Phat, but it has the same elements of trendiness.

“The Fabulosity girl is fun, fashionable and chic, but she doesn’t want to spend her last penny on something to wear,” Simmons said. “This collection is fashionable, but also affordable. The days of spending tons on clothes are gone — I mean, I still do it, but young girls can’t.”

The full sportswear collection, which features denim jeans in trendy styles — such as the high-waisted skinny jean, also includes a range of knit tops, blouses, coats and dresses. The line retails from $29 to $108, compared with Baby Phat’s $30 to $200 range.

As a division of Phat Fashions, owned by Kellwood Co., Simmons said she hopes to branch out the Fabulosity brand into a full lifestyle collection, similar to what the Baby Phat label has become. She said she is in talks for accessories, shoes, handbags and a home collection. Simmons’ book, “Fabulosity: What It Is and How to Get it” was released in 2006, and her Fabulosity fragrance, developed by Coty, launched in February.

For Penney’s, the kickoff of Fabulosity represents what will be an aggressive push to become hipper and shore up some merchandise holes. In addition to Fabulosity, the chain is rolling out private label Decree, as well as Le Tigre, which is exclusive to the store. These brands are expected to fuel Penney’s $1 billion junior business.

“A few years ago, we were really ‘Mom’s store,’” said Liz Sweney, Penney’s executive vice president of women’s. “But with all the initiatives over the last few years, we are becoming much more relevant. Many teens really look to us. They might shop the mall to come up with style ideas, and then she comes to Penney’s to get style with great prices. We are [no longer] ‘Mom’s store.’ We are very relevant to the teen style.”

Penney’s executives would not disclose a volume expectation for the brand, but said that Fabulosity will be featured in 600 of Penney’s 1,074 stores nationwide. It will also be available on jcp.com.

Simmons said she hopes to align the Fabulosity brand with the J.C. Penney Afterschool Fund, a charitable organization committed to providing children in need with access to after-school programs that foster their academic, physical and social development.

“As I get older, I continue to grow and move into what I think is a more meaningful direction,” she said. “I want my own kids to know that life isn’t just about looking good on the outside, but also on the inside.”

Tonight, Simmons will showcase the Fabulosity line at a launch party and runway presentation at Hiro in the Maritime Hotel in New York. Then, she said, she will have to work on coining the word, Fabulosity, which is quickly being picked up in the English language.

“I hear and read people using it all the time,” she said. “Now we just have to get it in the dictionary.”