A Makeover for ‘Mom Jeans’

Denim makers are out to change the unflattering conception about older women and jeans. 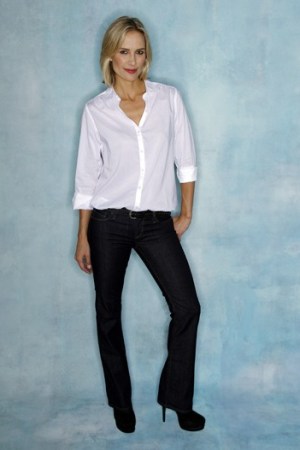 A memorable “Saturday Night Live” commercial parody some years back mocked a new line of “Mom Jeans.” As tragically dowdy women romped in high-waisted denim monstrosities, a voice-over intoned: “This Mother’s Day, give her something that says, ‘I’m not a woman any more.…I’m a mom.’”

These days, however, denim makers are out to change the unflattering conception about older women and jeans. A number of brands are specifically targeting women over 35 with fits and styles geared toward mature body types but with a focus on trendy, contemporary looks. This past fall, Kellwood Co. launched a denim and sportswear line called Democracy Declaration of Jean Dependence that emphasized stylish jeans in a “modern missy” fit.

“I believe there is an underserved consumer, myself included, seeking accessible and affordable clothing with an edge,” said Caren Lettiere, president of the Democracy and Jolt brands at Kellwood. “People are living longer and looking better, and we are capturing a broader customer base that encompasses the largest group of female consumers out there. But nobody in retail has embraced this demographic except at higher price points, which excludes much of the population.”

Democracy jeans retail from $58 to $68, with a corresponding tops line at $44 to $88. Key retail partners the first season were Dillard’s, Nordstrom and Von Maur, and the brand is now in more than 300 doors. The company will launch democracyclothing.com next month as an informational Web site.

Democracy jeans feature a higher rise than its contemporary and juniors competitors. All the fabrics have stretch, while stitching and seams are angled to enhance a curvy body shape. The waistband is wider than most jeans to help support and trim the stomach.

“We offer something for a missy body shape that is trend right, affordable and age appropriate,” said Lettiere.

While much of the denim world is fixated on selling jeggings to teens and twentysomethings, there’s also a lot of money to be made in older demographics. Women aged 35 to 54 bought $2.29 billion worth of jeans for the 12 months ending in January, up 1 percent from the year-ago period, according to NPD Group data.

In comparison, women aged 18 to 34 bought $3.03 billion worth of jeans in the same period, down 1 percent from a year ago. The biggest growth in denim in the past year was in the 55 and older demographic, where women spent $1.24 billion, up 17 percent from the year-ago period.

“Women want to continue to hold on to their youth,” said Marshal Cohen, chief industry analyst at The NPD Group. “Older women have invested in Botox and hair coloring. Key fashion items are also part of preserving a more youthful look. Jeans can literally help shape your body.”

Vying with Democracy for those consumers are denim brands like Kut From the Kloth and Not Your Daughter’s Jeans, as well as mall stores like Lucky Brand, J. Crew and Loft. “We did a lot of research, and we felt there was a huge void for this customer and there wasn’t a lot of fashion available to them,” said Mitchell Quaranta, president of Los Angeles-based Swatfame Inc., which launched Kut From the Kloth in 2006. “You had all of these great jeans brands that were really made for one type of woman — she had to have a really good body and she was probably on the young side. We wanted to create a jean that was trend-right and one where comfort and fit were extremely important.”

Like Democracy’s jeans, stretch and a higher rise are key elements of Kut From the Kloth’s design.

“They are designed with more room in the hips and higher in the back so there isn’t a gap when she sits down,” said Quaranta. “Our fit block is geared toward a woman in her 30s and 40s who might have given birth to a few children. She’s still got a great body, but it’s not what it was when she was in her 20s.”

Kut From the Kloth jeans retail from $79 to $99, with the line’s jackets at $68 to $108 and dresses from $79 to $109. About 65 percent of the brand’s sales come from denim. Kut From the Kloth is sold in more than 2,000 doors, including Nordstrom, Bloomingdale’s, Macy’s and a wide range of independent specialty stores.

The brand rings up in excess of $100 million in sales at retail, according to Quaranta, noting 2010 sales were up about 45 percent over 2009.

Not Your Daughter’s Jeans, which launched in 2003, is among the most visible brands targeting older women, the result of an extensive advertising campaign. Two years ago, private equity firm Falconhead Capital acquired a controlling interest in the Vernon, Calif.-based company.

The brand’s jeans feature trademarked “Lift Tuck” technology that lifts and supports a woman’s bottom, while a crisscross panel in the front helps tuck and compress the stomach. The company claims its jeans can make a woman look a full size smaller.

Not Your Daughter’s Jeans originally targeted women 50 years and older but has since expanded its target demographic to women in their 30s and 40s, as well.

Lucky Brand appeals to a wide age range, but the sweet spot is 30- to 45-year-olds, said Michael Griffin, executive vice-president of product at the Liz Claiborne Inc.-owned brand.

“We tend to think more about an attitude than an age, but we definitely have assortments for a curvier body type,” he added. “Our classic Rider, Easy Rider and Sweet and Low fits are more forgiving for the 35-plus customer. We want to make sure that we appeal to a broad customer base. We’re very democratic.”