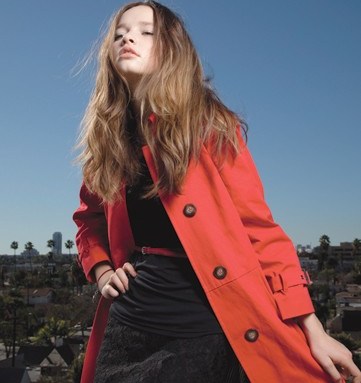 It’s a Darwinian world in the apparel universe as juniors manufacturers and retailers try to elbow aside the competition for oxygen in the form of sales, which are in free fall. Apparel sales for women ages 13 to 17 fell 6.4 percent to $36.2 billion from December 2007 through November 2008 compared with the same period a year prior, according to The NPD Group.

The dismal drumbeat of headlines heralding the closure of retailers including California-based Mervyns and Tennessee-based Goody’s Family Clothing Inc. are prompting clothing lines to rewrite their game plans to stay afloat. Nowhere is the urgency more evident than at WWDMAGIC, where a number of juniors manufacturers are bracing themselves — some more optimistically than others — for the challenging environment.

Orna Stark, president of Jem Sportswear, maker of Awake and licensed fare from Disney, Peanuts and “The Wizard of Oz,” said, “Our expectations are that budgets will be cut back and many of the large stores aren’t coming, and it’s really more of a specialty store business. “

Show officials report that as of late January, 25,000 retailers were confirmed in pre-registration, and that representatives from major retailers such as Target, Macy’s and Nordstrom will be in attendance. Chris DeMoulin, president of MAGIC International and executive vice president of the Advanstar Fashion Group, concedes that the event is making a concerted effort to attract retailers.

“We’ve developed an aggressive outreach campaign geared to retailers through advertising, direct marketing” and the personal efforts of the organization’s retail relations teams, he said in an e-mail.

Even so, juniors manufacturers aren’t taking chances. They’re casting a wider net to maximize sales. Jem Sportswear is reaching out to new customers and has solidified distribution deals with Lane Bryant and Nordstrom Girls. It’s also partnering with retailers for exclusive programs, including Kitson, a retail haunt of the rich and famous, promoting “Twilight”-inspired apparel with plans to host a party in conjunction with the movie’s DVD release.

Spreegirl is looking to court an international customer, including buyers from Singapore, Japan, Malaysia and the Middle East.

“We plan to do trade shows there this year,” said Vinh Luong, director of sales and marketing for Spreegirl. “We can no longer depend on the United States customer.”

The dire economic environment and the worrisome prospect of leftover inventory have helped manufacturers zero in on their fashion strategy.

“The key is to focus on what’s working,” said David Vered, president of YMI Jeans, which sells to 5,000 stores nationwide including Dillard’s, Nordstrom and J.C. Penney. “Cut out the experimental stuff. Capitalize on what’s proven and do it even better.”

For YMI, that means concentrating on the fit of the jeans and making it appealing in all varieties from skinny to flare.

At Honeydew Intimates, creative director Benny Zafrani said the company has pruned its stockkeeping units for spring by 33 percent compared to its fall lineup.

“We are taking the best-selling bodies and making them even more successful, offering more colors and fabrics and designing around the style to create other successful garments that can merchandise together,” Zafrani said.

In customers’ favor, manufacturers are holding prices steady while upping the value quotient. They’re creating product loaded with bells and whistles, such as providing blouses with scarves and denim jeans with belts.

So far, spring and fall styles aren’t in lockstep with the dour economy. Expect to see a buoyant mood in the fashion landscape for the juniors girl. Jem is offering lots of hand-beaded and bejeweled T-shirts and tunics with burnouts and sublimations. It’s using artistic washes and pouring on the embellishments with piping and ruching. Mighty Fine’s fashion knits feature over-the-top graphics in bold, energetic prints with themes of peace and love.

All the negative drama overlooks the fact that a number of companies are performing well. Spreegirl and YMI Jeans each posted positive sales figures for 2008 compared to the year prior. Companies, however, are having a hard time regaining footing after a challenging fourth quarter.

The expectation is that more companies will crumble. To stay visible, manufacturers are going on the offensive. Some plan to be more selective in their distribution choices and will turn down retailers who aren’t credit-worthy.

“Our goal is that we protect ourselves,” said Sara Scargall, marketing director of Mighty Fine. “We need to make sure that everyone has credit and is able to pay. It’s imperative.”

Staying visible and top of mind is also of paramount concern for manufacturers. To avoid getting lumped in with the barrage of negative news, companies such as YMI plan to maintain their promotional campaigns. YMI will launch its spring campaign in March, featuring Alexis Dziena, who starred in “Nick and Norah’s Infinite Playlist.”

“In a gloomy year, the number-one thing to do is retract our advertising budget and start saving money right away,” Vered said. “But we think it’s more important to maintain and expand it. We want to continue our dialogue with our customers.”

Retailers attending the show say they’ll be cautious with their buys because of the unpredictable economy. But they know they have a shopper in their juniors customer and need to show her novelty to earn her repeat business.

“If it’s new and great, you can expect that we’ll purchase it,” said Corie Hoeppner, owner of Even Sisters boutique in Newport Beach, Calif.