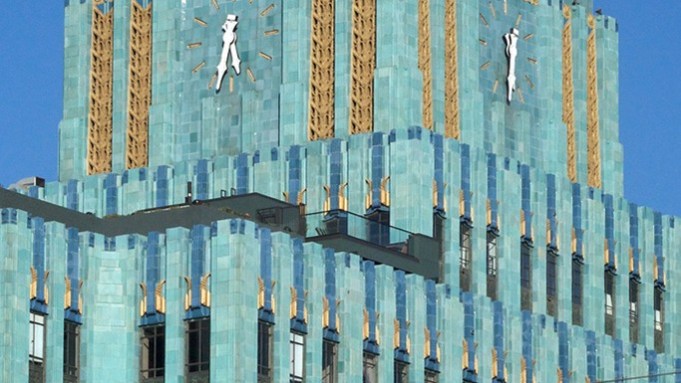 For its sophomore retail effort in the U.S., Stockholm-based Acne Studios is making a pioneering move for a global fashion brand by locating in downtown Los Angeles.

This fall, Acne Studios will open a more-than-5,000-square-foot store, its largest, in the Eastern Columbia Building, a nearly 83-year-old historic Art Deco structure at 849 South Broadway recognized for the turquoise terra-cotta tiles trimmed with gold and deep blue that cover its exterior. The brand gravitates toward eclectic store sites, but chairman Mikael Schiller maintained it doesn’t usually take chances on risky retail geography and just had a “good gut feeling on this one.”

“We were really looking at Melrose in the beginning, but then we went to downtown L.A. Maybe it’s a European thing, but we really liked the area. Obviously, people have been saying downtown is going to happen and have been saying that for 10 years and it hasn’t really, but we really liked it there, and we really liked the building,” he said. “Los Angeles is not really a city where people walk; people drive. So we were saying to ourselves, if we are going to do something, we have to do something that feels special and gives people a reason to drive there.”

The roomy single-level store, which will stock denim, men’s and women’s ready-to-wear, bags and other accessories, affords Acne Studios the space to put in a cafe, its first at a retail location, to be run by the people behind Il Caffè in Stockholm, including Magnus Jökulsson, a friend of Acne Studios’ creative director Jonny Johansson. The space also will contain a VIP room for customers who want a personalized experience, a concept that has worked for Acne Studios in London.

Denim today is roughly 20 percent of Acne Studios’ business in the U.S. and plays an understated role in its merchandising. At the stores, Schiller underscored customers won’t find a large denim bar. “Denim needs a lot of service, and we should have a lot of service. So what we feel is you don’t need to see a lot of the denim, it is more about having a close dialogue with the sales staff in the store,” he said.

Dating back to 1996, Acne Studios launched American retail in 2008 with a monobrand store operated by Opening Ceremony in New York. That store has since closed, and the brand last summer opened its own store not too far away on Greene Street. “What we see [in New York] is that people spend more money compared to our stores in Scandinavia,” said Schiller, adding that the new unit is performing well.

“We are going to open more stores in New York as well. We have one in SoHo, and maybe we could have one on Madison, maybe one in the West Village. We could have four or five in New York,” he said.

Outside of New York and L.A. in the U.S., Schiller believes Acne Studios has a retail future and pointed to Miami and San Francisco as possible destinations. “What we will try to do in the U.S. is we will take some of the larger cities and do it [retail] really well there, and have a great Web store and service the rest of the country through that and through wholesale,” Schiller said.

Schiller views retail as critical to the brand’s wholesale success. “During the last 18 months, we have tripled the wholesale business in the New York area. My historic experience is that, when you open a store, then you sell more to wholesale accounts around the store because obviously the brand becomes more visible,” he said, voicing confidence that the L.A. store could boost West Coast sales, which have trailed those in the east.

Globally, Acne Studios is also on a retail push. This year, a second store will open in London, a third in Paris, three stores in Seoul with partner Shinsegae, and a store in Japan in Osaka. Currently, retail and e-commerce are responsible for 45 percent of Acne Studios’ sales, but that percentage is poised to grow as Acne Studios’ retail spreads. Beyond Europe, “both New York and Tokyo performed really well, so it gave us some confidence to open more stores,” said Schiller. “That is how we work, by trial and error. When things work out well, we try to do more of that.”