Jeans are returning to their roots in the outdoors. Activewear clothiers, ranging from Columbia Sportswear and Nau to Burton and Puma, are adding... 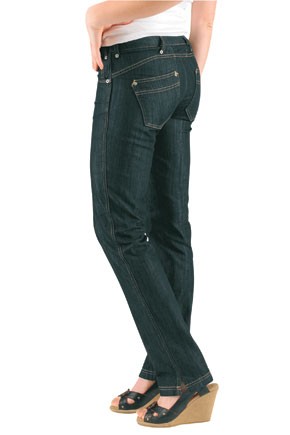 LOS ANGELES — Jeans are returning to their roots in the outdoors.

Activewear clothiers, ranging from Columbia Sportswear and Nau to Burton and Puma, are adding the sturdy workwear fabric first popularized by gold miners to their collections of Gore-Tex parkas and fleece pullovers.

The dungarees give nature lovers a stylish option that segues from the outdoors to the streets. They also are tools enabling apparel companies to adapt to retail fluctuations affected not only by the migration of people to Southern states, but also by global warming.

“We want to make sure we address those markets with sportswear,” said Sherrie Curtin, vice president of women’s and youth apparel at Portland, Ore.-based Columbia Sportswear. “We also increase our visibility and market share in casualwear, as well.”

Columbia’s last swing at denim came more than a decade ago with the unsuccessful attempt at marketing “the tough mother jean.” The latest incarnation, Columbia Blues Denim, was introduced last year. It took two years to finesse the fit. The company started with two basic flare and straight-leg styles available in a pair of washes that retailed for no more than $60. In the seasons that followed, it amped up efforts with a cuffed capri, a skinny style and an eight-ounce denim cut into a trouser-inspired version lined with a homey pattern of tiny navy diamonds.

In homage to its early denim days and a nod to the cantankerous persona of Columbia’s chairwoman Gertrude Boyle, the back pockets display rough-hewn embroidery of the letters “T” and “M” — for tough mother.

Nau, a sustainably designed and performance-driven clothing line that launched last spring, seeks to blur the line between outdoors and indoors. With two women’s jeans launching next spring, the Portland, Ore.-based company aimed to create looks that could pass for designer denim yet withstand the rigors of biking and climbing.

Though Nau opted not to overly engineer the jeans with darts around the knee and reinforced panels on the seat, it made some concessions for active customers. Made of organic cotton, the jeans are constructed with an interior facing composed of lightweight poplin that hangs down like a curtain to make them fit more smoothly and comfortably around the hips and waist. The belt loops were also moved back from the side so that a backpack or rock-climbing belt harness wouldn’t rub the wrong way.

“It’s a piece that has aesthetics and can really move with you through your life,” said Mark Galbraith, Nau’s vice president of design.

Collaborations are also a means to move past the competition. In November, Adidas Originals and Diesel launched a four-year alliance to collaborate on a new jeans line called Adidas Originals Denim by Diesel to be sold in Adidas Originals stores worldwide. With retail prices starting at 160 euros, or $243 at current exchange, the women’s jeans include boot-cut styles with a slightly elevated waist in two washes and black denim.

Puma is continuing its almost two-year denim collaboration with Hong Kong-based Evisu and will produce jeans in-house for the first time as part of a new lifestyle subbrand, Dassler. Retailing for more than $100, the inaugural denim collection includes white capris gilded with Lurex threading and cuffed shorts that look as if they have been bleached in the sun.

Sweden’s We Are the Superlative Conspiracy is preparing to offer its largest denim assortment for spring. The collection will include seven styles and 11 washes split between two categories retailing from less than $100 to around $220. Jumping on the denim bandwagon early, skateboard-centric WeSC got serious about fashion denim in 2003.

“WeSC denim cuts are definitely sporty and youthful, but our fabrics, detailing and cuts are in sync with premium denim,” said a company spokeswoman.

Not all companies are ready to jump into spring. Burton Snowboards, based in Burlington, Vt., will wait until fall to unveil five styles in its first group of women’s denim for both its main brand and B by Burton.

As the higher-end brand costing about 20 percent more than the flagship label, B by Burton will offer five-pocket skinny pants that have a removable front panel and hood to convert it into an open-back overall. Burton, on the other hand, will sell a five-pocket model with removable suspenders in an overdyed herringbone pattern. Using a more fashionable palette of black, grape and burnt olive, as well as hidden pockets, the jeans, which will retail for less than $100, won’t be ideal to wear on the snowy slopes. Gabrielle Sampietro, Burton’s vice president of apparel, emphasized that the jeans are streetwear.

“This is complementary to round off the collection,” she said. “Why have your customer go to another brand to buy a pair of jeans if you can provide something that merchandises perfectly with the line?”