AG Jeans cofounder and ceo Yul Ku remains focused on the future and fixated on technology to continue to push his business forward.

Yul Ku delivered the statement softly with a half smile, mostly kidding as he gestured to a nearly empty box of Turkish delight, pistachio and rose petal-coated candies, set forth on the conference table at AG Jeans’ sprawling factory and headquarters in South Gate. He prods one more time for a guest to have a sampling before turning to the main topic of conversation and reason for the visit: AG’s recent installation of a water filtration system in its Mexico and South Gate factories that takes the company from 50 percent recycled water use to the ability to manufacture with 100 percent recycled water.

The summer collection, launched in March, reflected the first season of denim and ready-to-wear created under this new filtration system. Ku said this is the first time anyone in the industry has attempted such a feat, but acknowledged he and his peers in the market use too much water at a time when sustainability is top of mind for a new breed of consumer that demands to know the ins and outs of how their clothes are made.

Ku acknowledged the installation is an investment, and one that he said the company is happy to absorb. AG, a privately held business, doesn’t disclose financial information and the company also declined to say what it spent on the water filtration system.

For Ku, the subject of sustainability has been a focal point for some time before sustainability and statements such as radical transparency entered the consumer consciousness and lexicon. At the heart of it, he’s a tech junkie and more at home walking the roughly 15,000 steps across the office, factory and warehouse space, which not only boasts the latest in denim production equipment (think high-tech lasers whiskering multiple pairs of denim in seconds, equipment that allows the company to avoid liquid discharge into the pipelines and rooftop solar panels) but also fancy-looking water dispensers for employees and air filtration systems in the office. He wanted to bring back a cleaning robot he spotted at the airport in Korea, but it’s not yet ready for market prime time. He suggested coming back again when the robot’s in action at AG.

Ku, who operates with a lot less filter than the typical chief executive, helms a denim and fashion empire. His business employed 1,880 people around the year 2000, when it was Koos Manufacturing, a sister company to AG (the denim brand being formed later). Today Koos and AG have a combined 550 people working in South Gate. AG also counts another 250 workers when its store employees are factored in. The company’s consolidating the workforce currently spread across two buildings into one in a move that should be done before the second building’s lease comes due in July. Reducing costs in that sense is one way of hedging against some of the current market headwinds. 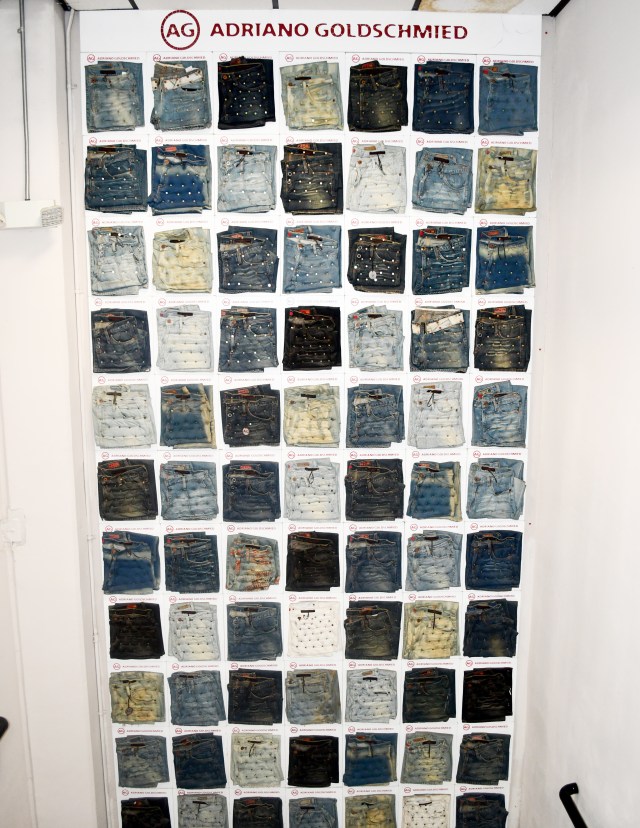 Business isn’t exactly great, but Ku is unfazed. He said AG expects a drop in business of around 8 to 9 percent this year in line with where he thinks the overall market is trending.

The company’s not been insulated from the challenges of domestic manufacturing and Ku shakes his head when asked if L.A. could ever see large-scale manufacturing come back. It’s too expensive, he said. And most have already left for Mexico, something his company did more than two decades ago. The factory there accounts for the bulk of the company’s manufacturing with South Gate next and China handling less than 10 percent.

There are currently three legs to AG’s business: retail at 15 percent of overall sales, online at 8 percent and wholesale accounting for the lion’s share. The company recently opened a store at Hudson Yards in New York and plans to open its 17th door in Scottsdale, Ariz., in the fall. Ku thinks 20 doors is the right size for retail, and feels online could grow to about 20 percent.

Ask him what the industry’s greatest challenge is when it comes to going green and he’s honest there, too.

“Oh, I don’t know. I believe in myself,” he said. “I think the store has the problem. Most store[s] is the problem because the leasing is so expensive. When we started in the business 15 years ago, every year [landlords] raised [rents] 3 percent, so 15 years in leasing it’s 45 percent. So you’re not making money.”

But the stores, as many brands acknowledge today, are good for marketing purposes, the ceo said. 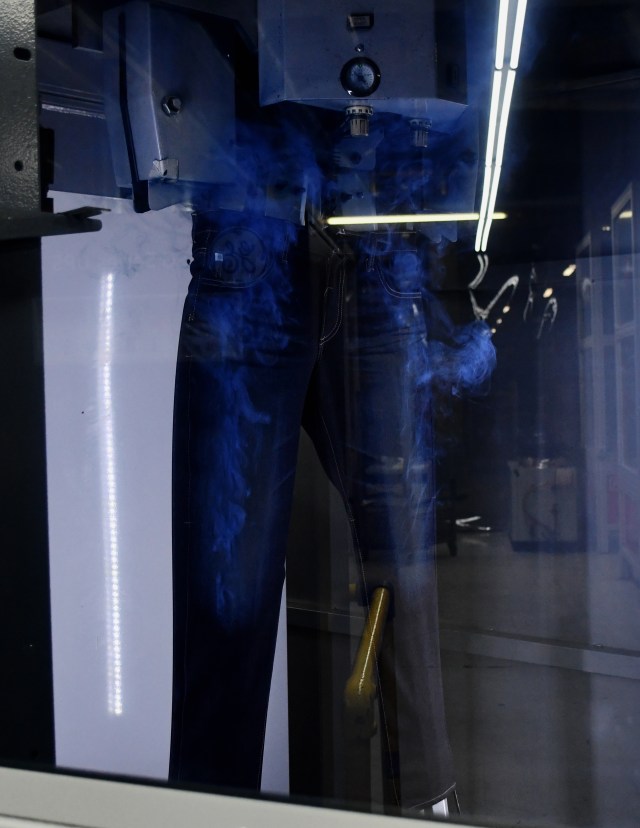 Right now, Ku said of AG, it’s about diversifying the product, adding in more knitwear to the assortment, and bringing it to market faster. Where in China the process from start to finish could be roughly five months, it’s about 30 to 40 days in Mexico or South Gate.

Inside AG’s factory, it’s a well-oiled machine. There aren’t silos. Designers and some patternmakers sit next to the tech pack makers, so they’re all in one bullpen communicating. Ku doesn’t even have his own office. He has a desk where his assistant and general counsel also have desks nearby, lining the perimeter of the open floor plan.

“Always eating,” Ku said largely to himself as he stopped by his desk. “You want chocolate? This is candy. Someone gave it to me.”

There’s a square tin of what looks like pistachio-covered toffee. He has no computer. He refuses to use e-mail.

He sifts through another tin of buttons sitting on his desk, the ones used for certain pairs of AG jeans. On quick glance, the button reads “49,” but it can also be read as “AG.” 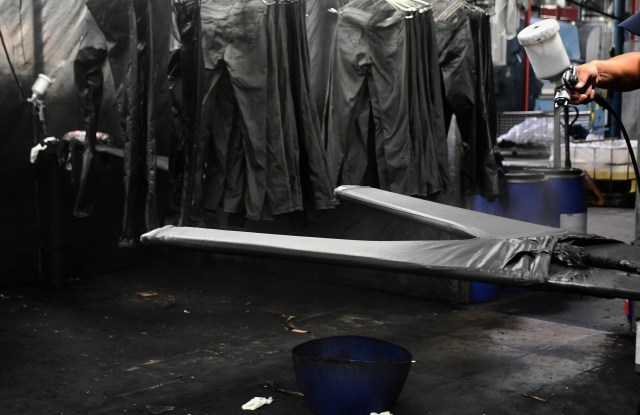 The treatment done by hand by AG workers that gives pants a leather-like effect.  Kari Hamanaka

Ku moves fluidly past his desk, his pace quick as he weaves in and out of the different departments. Then it’s into the massive factory operation, filled with rows of sewing machines, fabric cutters, embroidery machines, laundries, dyeing, rows of machinery (some of it brand new) some focused on the laser treatments to denim and on down to rooms where every single hangtag for AG is made.

“I’m a little crazy,” Ku said. “Everything [is] controlled myself.”

His tight grip on the quality across the operation is a point of pride, but perhaps not as much as the workforce itself that he’s amassed across the decades.

“Cuantos años has trabajado?” Ku asked over and over again as he greeted various factory workers with handshakes inquiring with them how long they’ve been with the company.

Twenty or 25 years in some cases. Almost 30 years in another. One woman in the sewing room says 40.

It’s this group that’s helping Ku as he steers his ship with innovation in not only manufacturing technologies but the product itself.

“I’m in the business of quality products,” he said. “Right now, we do denim really well so now my challenge is the next product.”

To that end, Ku and team are readying for the market release in the fall of a new denim product called B-Type that’s aimed at significantly expanding the size range to fit more body types. He said it’s something he had begun considering some 16 years ago. 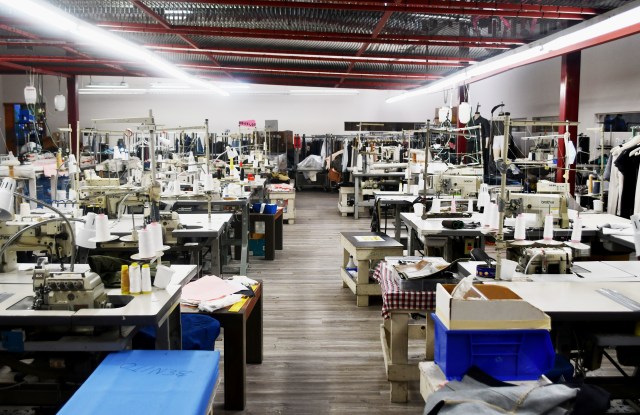 “Everyone’s inseams are different. You have to get in the car, go to a tailor, and then you have to wait two, three days,” he said of the traditional tailoring process for better-fitting denim. “[B-type]: You buy. You wear. That’s it. You’re done. You get them tomorrow. So different kinds of things I try to service the customer.”

Outside of that is just a general desire to offer more than denim.

Apparel runs in the family. Ku’s father dealt in knitwear. Ku’s son, who used to be at AG, struck off on his own and late last year announced his new premium denim and essentials line Cqy (pronounced “coy”). Ku himself, who is known as a heavyweight in denim, said his operation is far more well-rounded: “We do total fashion. We do knitting and dyeing, complete finishing. So we try not only denim, but all kinds of sportswear.”

Despite the general dip currently in the business and broader industry and the persisting competition from categories such as activewear, Ku’s hand is steady. He’s seen the cycles and weathered them. It’s, as he largely likes to tack onto many of his thoughts, “No big deal.”

“Denim is over 100 years [old]. It’s always up and down. Anything, it’s up and down. Up and down,” he said. “But you walk around and you go anywhere, always denim is [worn]. People wear jeans.”