The fourth-generation executive of a venerable family-held denim firm is guiding the company with innovation and sustainability. 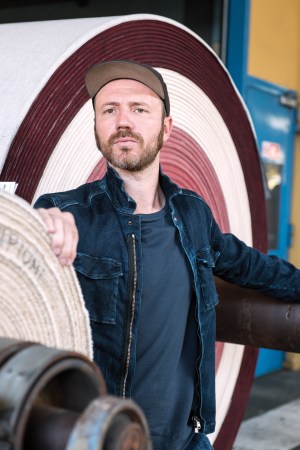 “I’ve been wearing one since I was 16,” said Alberto Candiani, adjusting his black baseball cap before striking a pose in the denim factory established in Robecchetto con Induno, just outside Milan, by his great-grandfather, Luigi, in 1938.

Sports are among many interests for Candiani, 34, who holds the post of global manager at his family’s firm, one of the world’s leading companies in the production of high-end denim fabrics. Passionate about hockey — he sports a fresh bruise on his knee — and music — every two summers he goes on tour in the U.S. with his industrial rock band, Army of the Universe — Candiani exudes a charming mix of competence, passion and savoir-faire.

“I was born in Lugano, but I was raised here,” the young executive said. “As a child, I was looking at the factory as an alien world to explore, a playground. I actually used to bring my friends to play into the factory and I was organizing forklift races in the warehouse.”

While the company has always been part of his life, Candiani experimented with a different career before finally joining the business.

“My father used to push me to look at the company in a serious way, asking me to join him in his evening tours, but the results were quite mediocre, and that pushed me toward different interests,” he said. “Music became a form of rebellion and at the end of high school I started working as a DJ producing and playing trance music. I was traveling across Europe to play with pretty famous DJs.”

When it came to choosing a college, Candiani’s selection was also unconventional.

“My father wanted me to attend Bocconi University, but I’m kind of allergic to economics and especially finance, so I opted for public relations and advertising at Milan’s IULM, which was the university with the highest percentage of girls.”

Despite the distractions, Candiani eventually came around, completed his studies and started working at the family firm.

“The day of my graduation, my father wanted me to bring pastries to the factory,” he said, “marking my official entrance into the denim business.”

While he experienced all the different areas of the company, Candiani quickly focused on marketing and product development.

“In 2005, we saw a boom in denim, especially with American brands, and we increased our production by one-third,” he said. “It was time to start thinking about marketing strategies and move to the next level.”

With his father, Gianluigi — president of the company — taking a step back from sales, Candiani found himself traveling the world to meet clients, 80 percent of them international. “I still travel a lot, about 150 days a year,” he said.

The global financial crisis impacted the denim sector in 2008, but Candiani said the company actually never had serious problems. He realized the firm had to start thinking in a new way to face aggressive competition from emerging markets, especially Turkey, as well as softer orders. In 2010, Gianluigi gave Alberto the green light to take the reins of the company and “face the modern era in a more modern way.”

“Dad focused on the process of industrialization and I worked on the reorganization of the company in terms of product, marketing and sales,” he said.

The younger Candiani started looking at sustainability as a pivotal element: “The goal is to realize a product that is not only more beautiful, but which also guarantees great performance in terms of technology, quality and ecological sustainability.”

In particular, the company, which manufactures 24 million meters of denim a year, is focused on developing technologies and products aimed at conserving water. For example, Candiani created the N-Denim dyeing technique, which uses nitrogen and less water than traditional methods. It also trademarked the Indigo Juice dyeing technique. This fixes indigo on the fabric surface, enabling it to be washed with less water, to more easily attain customized shading.

Asked about the relationship with his father, Candiani said, “We always agree about major matters, we argue about details. My father has huge experience, and experience represents 50 percent of what you need to be successful in this business. The remaining 50 percent is courage and vision. If you want to be competitive, you have to try to be better than others by taking some risks.”

Candiani Denim registered sales of about 100 million euros, or about $113 million, last year, and employs 650 people in two factories — the original one in Robecchetto con Induno and a newer facility in nearby Malvaglio that opened in 2001, which accounts for 90 percent of the production of stretch denim, the company’s specialty.

According to Candiani, 60 percent of the 300 million premium denim products produced in the world every year contain stretch yarns.

“The denim stretch segment is definitely growing and while from 2000 to 2010 it was just for women, in the last five years men were more attracted to stretch items. And, actually, the trend is inverting with women returning to more rigid pieces,” Candiani said.

The U.S. is the most important national market for Candiani Denim, accounting for 35 percent of total business. Europe represents 50 percent of sales, with Germany and Italy as the key markets on the Continent. The remaining 15 percent of revenues are generated across Asia.

To develop a deeper knowledge of its fabrics and their potential, in 2013 Candiani Denim inaugurated a development center at its main factory, where it experiments with different washes and fabric treatments. “This allows us to solve quality problems and at the same time to differentiate products to guarantee a customization service,” Candiani explained.

A twin of the original development center opened last month in Los Angeles, where many of the firm’s clients are located.

The company also develops exclusive fabrics for specific clients able to guarantee big orders. These include Lucky Brand, AG Jeans and Seven For All Mankind.

According to Candiani, 70 percent of the company’s clients operate in the premium segment, including companies retailing denim jeans from 100 euros, or about $114 at current exchange. Candiani fabrics wholesale at an average price of 4.90 euros, or $5.58, per linear meter.

“We cannot go below 4 euros [$4.56,] even if in general our competitors’ entry price is 3.95 euros, [$4.49,] per meter,” said Candiani, who revealed that the most expensive denim fabric ever produced by the company was a selvage item with Kevlar that sold for 12 euros a meter, or $13.67. “It was used for the official uniforms of the French national rugby team.”

Even if the company has never tried to win the price war, it’s definitely fighting to maintain its leadership position in the business via innovation and, ultimately, quality.

“Our mission,” he added, “is to be up front when it comes to innovating denim through new technologies.”