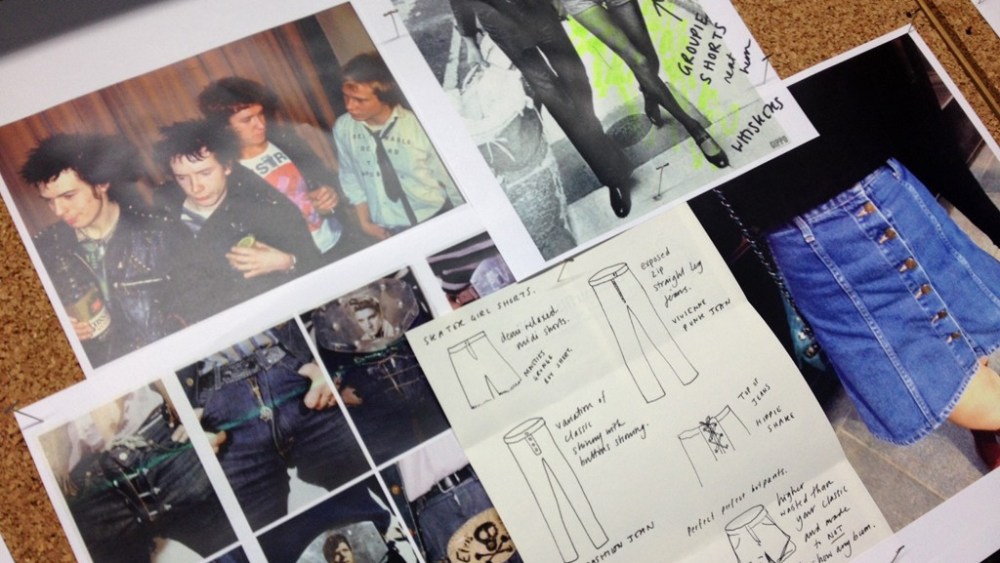 LOS ANGELES — After penning a book on how to be an “It” girl and spawning a hashtag for her personal style on social media, Alexa Chung is showing fans how to dress just like her through a new denim collaboration with AG Adriano Goldschmied.

The former model is readying 20 stockkeeping units, ranging from overalls and denim dresses to T-shirts and jeans, for a line called Alexa Chung for AG that will hit stores in January for spring.

“The collection is inherently the missing pieces of my dream denim wardrobe, which, as ever, is predominantly inspired by a late Sixties, early Seventies aesthetic,” Chung said.

A TV personality in her native U.K., where she won the British Style Award three years in a row, Chung broke into American pop culture in 2009, when MTV aired her daytime talk show, “It’s On With Alexa Chung,” featuring guests such as Cameron Diaz and Vanessa Hudgens. Though canceled after only six months, the show helped boost Chung’s social-media status, which now boasts more than 1.3 million followers on Twitter and more than 991,000 on Instagram. It also served as a launchpad for a book titled “It”; a grunge-inspired clothing collection with J. Crew Group’s Madewell brand, and a regular spot in the front row at runway shows for Proenza Schouler, Marc Jacobs, Chanel and other fashion houses.

Click Here for a Slideshow of Alexa Chung’s Style >>

On a recent visit to the office of AG and its parent company, Koos Manufacturing Inc., in South Gate, Calif., Chung relished discovering that it was also the site of its 400,000-square-foot factory, run by the Ku family, steeped in the denim industry.

“I found the trip incredibly inspiring and an opportunity to learn about denim and make things I had been dreaming about finding,” Chung said.

As a street-style star who has captivated Millennials with her insouciant mix of luxury labels and vintage finds, Chung has honed a sharp eye for details. For one blouse she sketched herself, she insisted on a button facade covering the snaps. While confessing her fondness for A.P.C., Wrangler and Lee, especially their medium-blue tints, Chung also added “palest pink, cream, rusty red [and] washed army green” to her palette. She flitted between tomboy and ladylike, offering an oversize graphic sweatshirt that could also be worn as a dress, as well as a shrunken denim jacket and matching miniskirt that she said evoked “Chanel, Nineties Versace.” She also electrified a black-and-white photo of Jane Birkin with a neon yellow marker, drawing attention to what she dubbed “groupie shorts.”

Other items, juxtaposed under photos of the Sex Pistols on her inspiration board, included “skater-girl shorts,” “NYC fashion jean,” “Vivienne punk jean” and “perfect perfect HotPants,” which, in Chung’s words, are “higher-waisted than your classic and made to not show any bum.” To be sure, she also realized her limitations as a designer. Next to a sketch of a sleeveless denim oversize jacket with frayed edges, she wrote, “awful drawing.”

This is where AG, a 14-year-old brand with more than $100 million in sales, applies its expertise. Chung is AG’s latest collaborator, following a series initiated two years ago with men’s golf label Travis Mathew, celebrity stylist Cher Coulter and textile studio Liberty Art Fabrics. After sending photos and books that inspired her back and forth, Chung and AG’s creative director, Sam Ku, spent a day scouring vintage stores all over Southern California in April.

“A lot of the ideas in the collection are items that she wants or her friends want, but they can’t buy right now,” Ku said. “For someone who has never really worked in fashion, she has a keen sense of how to put a collection together and which pieces go together. Like the denim and nondenim side, it made sense going forward. She has an innate sense of style that allows her to put together ideas and pieces that work together.”

Chung’s experience in front of a camera also will come in handy for the print ads that will promote the venture. Ku declined to project sales for the collaboration, which will continue through fall 2015. He said retailers who’ve expressed interest in it include Selfridges, Net-a-porter.com and Shopbop.com. AG’s own stores and e-commerce site also will sell the pieces retailing for between $70 and $300.

If the teaser that Chung posted June 9 on her Instagram page of the forthcoming design collaboration is any indication, more than 19,000 fans who liked the photo could be turned into potential customers. “She has that sensibility that people want a part of,” Ku said.