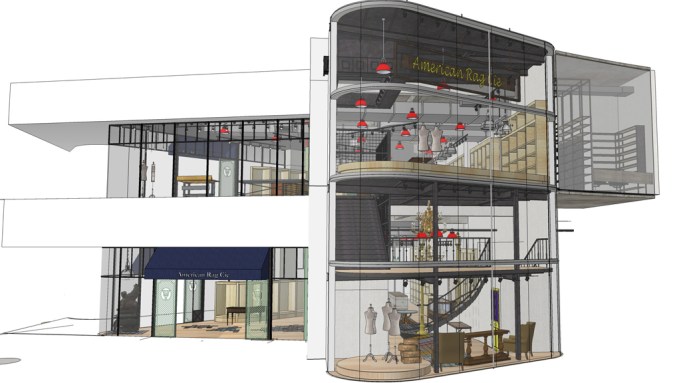 LOS ANGELES — After popularizing vintage fashion and premium denim for over three decades in its West Coast stores, American Rag Cie is taking on a new challenge: bridging the gap between Chinese and American fashion.

With a two-prong strategy covering both sides of the Pacific Ocean, the retailer not only opened a shops-in-shop promoting made-in-China products in its Los Angeles flagship, it’s also readying a 6,500-square-foot store to bow on Shanghai’s Nanjing Xi Lu in June.

American Rag is also in the midst of negotiating leases for a second location in Shanghai and another outpost in Beijing. In addition, Hong Kong is on the agenda for its burgeoning retail network to be run by The Hub, a trade show organizer that is the majority shareholder in its Chinese venture.

“We believe in China,” said Mark Werts, a co-owner of American Rag. “I think it’s time for the two biggest economies in the world to work together.”

American Rag is the latest company vying to introduce U.S.-made premium denim and contemporary fashion to Chinese consumers. Through a distribution deal with Skinmint, the Pasadena, Calif.-based subsidiary of Golden Eagle Retail Group, which operates a chain of department stores in China, South Gate, Calif.-based denim label AG plans to open its first store in Nanjing in June and another in Shanghai around the end of the year.

In other parts of the world, American Rag counts two namesake stores in Southern California, 13 in Japan and one each in Thailand and Indonesia. These new stores in China replace the shops that American Rag recently closed in Shenzhen and Chongqing. Linking with Levi Strauss & Co. as a minority partner, it also runs stores bearing the name of Industrie Denim in Scottsdale, and at two different locations in Istanbul, Turkey.

With its China push, American Rag is adapting the same strategy that it currently employs in its 13 stores in Japan, where half the merchandise is produced locally and the remainder consists of U.S. fashion brands. Part of the rationale for vertical manufacturing is to bypass the high tariffs imposed on products imported into China. The U.S. brands that American Rag will carry in its stores in China include Apolis, Grey Ant, Jean Shop, R13, Mother, Current/Elliott, Schott NYC and Public School.

Aside from attracting customers who are willing to pay the prices for the foreign brands, American Rag must overcome other difficulties.

With the shops-in-shop, American Rag is highlighting eight brands that are designed and manufactured in China in a 600-square-foot nook within its 17,000-square-foot store in Los Angeles. Under the Chinese and American flags, and bilingual placards declaring “friendship,” visitors can check out Mobius Studio’s $515 burgundy raccoon-hair cardigans, Vintage Republic’s $95 indigo terry shorts and Chi Zhang’s $285 Neoprene T-shirt plastered with a gas mask print. The other featured brands are Taciturnli, Goods of Desire, Atelier Rouge Pékin, Yaang and Hui by Eran Hui. Many of them are selling in the U.S. for the first time.

The cross-pollination between China and the U.S. emerges in the breezy separates made in Los Angeles by Amanda Shi, a Chinese designer who is married to Werts. Still, company executives don’t worry of courting controversy amid momentum for made-in-USA.

“Because we’re in a global world and a global economy, it doesn’t matter where it’s made,” Werts added. “It’s [about] a price-value proposition and design and fabric.”

By introducing cutting-edge designers from China to U.S. consumers, American Rag can avoid comparisons to the kitschy wares sold to tourists in Chinatown. It tries to cover a wide range of shoppers with Goods of Desire’s $43 plush pandas that convert to neck pillows and $1,588 red glass vases that can easily hold long-stemmed blooms. Privately-held American Rag declined to project sales for the shop-in-shop or its Chinese retail venture.