Trade and consumer events to be woven into group's first European show. 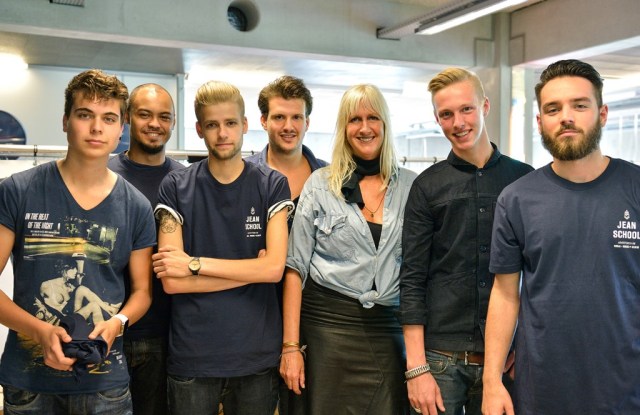 Amsterdam is about to be bathed in blue.

The first Kingpins show in the city — its first anywhere in Europe — kicks off a two-day run at the Westergasfabriek-Gashouder Wednesday.

The show will serve as the starting point for Denim Days, four days stretching to Saturday during which the capital of the Netherlands will make its most concerted effort yet to establish itself as Europe’s denim capital as it hosts events for the trade such as the Kingpins denim suppliers’ show; Blueprint, a multifaceted event for consumers and other “denim-heads,” and even a “Denim Run” in which participants will bicycle through the streets of the city.

The arrival of Kingpins in Amsterdam and inaugural edition of Denim Days come at a time when the rights to the title of “European denim capital” are up for grabs. Denim by Première Vision will shift its two-day show, beginning May 21, from Paris to the Montjuïc exhibition center in Barcelona, Spain, in its effort to accommodate the majority of its exhibitors and buyers who come from outside France.

The Amsterdam events are an opportunity for the city to show off its homegrown talent and an invitation to Europe and the rest of the world to recognize the city’s and country’s commitment to its fast-growing denim industry, understandable in light of its claim that Dutch consumers own more jeans per capita than any other country.

Participants in the Blueprint event — which will feature special discounts, demonstrations and panel discussions — will include local firms such as G-Star Raw and Denham the Jeanmaker, resources from neighboring markets such as Sweden’s Nudie Jeans, emerging talent from newer brands and design houses and a series of seminars for consumers looking for a more in-depth understanding of fashion, technology and sustainability developments within the denim market.

Consumers will pay a fee of 10 euros, or $13.75 at current exchange, to attend the various Blueprint events,

Much of the momentum in Amsterdam regarding denim has come from Mariette Hoitink, the managing director of the HTNK fashion recruitment and consulting firm who also cofounded the city’s Jean School with James Veenhoff, director of Amsterdam Fashion Week and founder of the House of Denim Foundation that established the school.

Founded in 2012 and owned by the Dutch government, Jean School is a three-year program that prepares its students for careers in various aspects of the denim industry. Strongly connected to members of the denim trade in Holland and in markets in Europe and elsewhere, the school is believed to be the only one in the world with a curriculum exclusively dedicated to the jeans business. It will even operate a laundry of its own on the premises.

“I love what the House of Denim is doing and I love what the Jean School is doing,” said Andrew Olah, founder of Kingpins and chief executive officer of Olah Inc., which produces its shows in New York, Los Angeles and Hong Kong as well as Amsterdam, and now a member of the House of Denim’s advisory board. “House of Denim will have a booth at our show and the Jean School will have a workshop. I’m a huge proponent of what they’re doing with denim in Amsterdam and it’s tremendous that there’ll be a large business-to-consumer event running throughout the city from the minute we end our show.”

Hoitink noted during a recent trip to New York that the presence of Kingpins will not only elevate Amsterdam’s visibility in the world of jeans but also help to reinforce its reputation as a working denim city. “Partnering with Kingpins is a great opportunity to connect all of House of Denim’s projects, including Jean School, to the international denim fraternity,” she said.

For Olah, the move into Amsterdam was an opportunity to put together a show in which European suppliers had a chance to shine and the selection of exhibitors — there will be just about 40 — could be pared to a selection of companies providing denim, specialized fibers and related technology and component parts.

“More than 60 percent of the exhibitors at the Amsterdam show will be companies that have exhibited at other Kingpins shows, but we have a limited amount of space and we wanted to make sure of a number of things,” Olah told WWD. “First of all, there’s a high concentration of European exhibitors and secondly there are no full-package suppliers. When we went out looking for exhibitors, we wanted to spread things out and have no more than four exhibitors per country. There may be 500 suppliers in China who fit into our profile; we only took three of them.”

In keeping with recent Kingpins events elsewhere, the May show will feature a series of panels and presentations aimed to foster industry knowledge and spur dialogue.

The first day of the show will see Invista present findings on a global study showing what consumers want from their jeans and Kingpins present a panel discussion with the title “WTF Is Premium Denim.” The latter will be moderated by Olah with contributions from Alberto Candiani, global manager of Candiani Denim; Panos Sofianos, creative director of Denim Valley by Royo; Jason Denham, founder of Denham the Jeanmaker, and Maria Cristina Pavarini, senior features editor at Sportswear International. Additionally, WGSN Group will offer a trend presentation.

WGSN will return with a program covering fall 2015 denim trends on Thursday, while panelists will discuss “Sustainable Cotton — What It Is, What It Isn’t.” Participants will include Patrick Laine, ceo of Better Cotton Initiative; Naomi Stevens, global head of market acceptance for seeds at Bayer CropScience and E3, and Liesl Truscott, director of farm engagement at Textile Exchange.

While lack of space makes substantial expansion of Kingpins’ size improbable, there are plans for a second show to be held Oct. 28 and 29. While other elements of that week aren’t yet decided, E3 will sponsor the first Global Denim Awards, which will showcase the works of talented young designers who will create capsule collections with a number of global denim mills. Industry experts will be selected to pick the winners and serve as mentors for contestants.