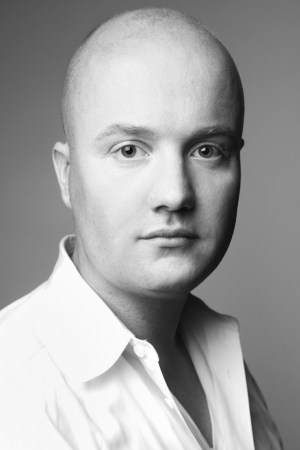 For his inaugural collection as creative director, women’s, of Diesel Black Gold, Andreas Melbostad employed numerous themes reminiscent of his days as the designer of Phi, bringing forth lots of leather and a penchant for asymmetry and metallic embellishment.

There was a new twist in his pre-fall effort as well, one that had more to do with his new home — denim — than his personal heritage.

“I’d done very little denim previously,” the Norwegian-born designer told WWD, “but coming to Diesel was very inspiring, both in seeing what can be done with it as far as structure and engineering, and in the way it can give a collection an aesthetic lift.”

As the upscale, contemporary sibling of Diesel, the billion-­dollar-plus denim brand founded by Renzo Rosso nearly 35 years ago, there is “an ongoing debate about how to incorporate denim in the collection, as it should be,” said Melbostad. “It’s not something we would want to overdo, but raw denim is a very important part of the evolution of Diesel Black Gold and I’m just beginning to see some of what can be done with it.”

In the pre-fall grouping, the fabric is an integral part of a statement that suggests a modern American biker, appearing in both raw and coated form in jeans cut on the skinny side, in jackets shown layered with longer outerwear and as trim in other pieces.

“When I first met with Renzo, it seemed like a natural fit,” the designer said. “There was an exploration of what denim could be, and I had a good feeling about doing a collection that was a little more accessible from a price standpoint.”

In searching for a creative director to succeed Sophia Kokosalaki, Rosso said, “We needed to find somebody who came not from the Diesel world but from the world of designer and luxury, who would respect what we are and also had the respect of the market. Who could upgrade the line and show us where it needed to go.”

Rosso, who last month added a majority stake in Marni to the Only the Brave Srl stable that houses Diesel and the Black Gold collection, had a positive sense about Melbostad even before discussing the DBG job with him.

“I was so much in love with the Phi collection,” he told WWD. “It was very sexy, very dark with lots of metal — actually, very much me.”

Rosso views Black Gold, founded in 2008, as a natural fashion extension for a woman who is 35 or older, may have grown up with the Diesel brand and is ready for something with more fashion, quality and modernity, as well as a contemporary price point.

At about 55 million euros, or $72 million at current exchange, DBG’s 2012 sales are dwarfed by Diesel’s 1.1 billion euros, or about $1.45 billion. The care and nurturing of the collection are a high priority for Rosso as he shepherds high-fashion properties such as Viktor & Rolf, Maison Martin Margiela and now Marni through an uncertain, fickle market.

DBG is sold in the contemporary departments of department stores and in contemporary specialty stores, but its own retail footprint has been limited to a store on Greene Street in New York’s SoHo district, with plans for stand-alone stores in Tokyo and, later on, “the most important towns in the world.” While Rosso is careful not to mix the upscale with the more mainstream to too great an extent, DBG is sold in dedicated space within the best of Diesel’s 400-plus stores around the world.

“Andreas has the hand for luxury and the contemporary, and we have the denim hand,” he said. “We have joined hands but we have to be careful that it has its own identity. We don’t want to contaminate it.”