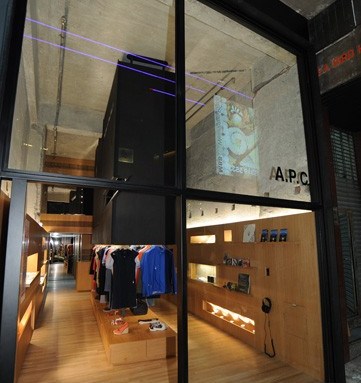 HONG KONG — French fashion house APC has opened its third store in the heart of the Central shopping and entertainment district here.

The 500-square-foot unit on pedestrian-heavy Wyndham Street here features a contemporary blend of exposed and shabby concrete beams, pale timbers, well-lit mirrors and a rectangular black aluminum and glass facade. It was designed by architect Laurent Deroo, who also did APC’s stores in Tokyo’s Harajuku area and Los Angeles.

Jean Touitou, APC’s founder and owner, flew in to attend an opening party featuring a performance by French rock band Housse de Racquet and visit his other stores in the region.

Hong Kong has hit the radar for this recent expansion, but Japan, where Touitou made his first Asian foray with APC, is no longer a focus for growth. In recent years, APC has closed some stores there and intends to focus more on Paris than Tokyo.

“There used to be about 20 stores [in Japan], but we now have about 15,” said Touitou, sipping tea in the Mandarin Oriental Hotel here, adding that his focus is shifting to his home turf, partly because the economic environment is not conducive to doing both.

Touitou is an amateur guitarist and singer, and his Paris design studio is adjacent to a recording studio where some of his staff play music during downtime. As a result, he occasionally uses a musical anecdote to make his point.

“What I mean [about downsizing in Japan] is that it’s better not to have a hit record all the time, as they’re waiting for you to fall,” he said.

However, Touitou said he was eager to open the latest unit here, where there are fewer outlets and a reliable economy. The store’s location also is in keeping with APC’s street-level image. Wyndham Street is a major thoroughfare in a vibrant area frequented by office workers and tourists. It’s a contrast to the high-rise shopping malls surrounding it.

“Hong Kong…doesn’t have streets — no streets that really make sense,” Touitou said. “It’s mostly about going from one building to another air-conditioned building. We cannot have the same experience in Hong Kong as we do in other parts of the world and there definitely isn’t the same street experience. That’s why I think Central has some of those necessary street characteristics.”

Touitou does not intend to expand further on the island.

“Enough is enough,” he said. “I don’t want to overdevelop it. I don’t even like flagship stores. I think there are way too many huge stores in Hong Kong.”

Although he is cautious about Asia, Touitou is going back to his roots and is buying a store in Paris that took him years to find. He said he felt for a long time the French did not appreciate his work, so he looked abroad to grow his company. The new shop will lift the brand’s retail store count in Paris to six when it opens this month.

Touitou said the company will wait for the world economy to recover before further expansion, but it is proceeding with the launch of an essential oil perfume in September. The scent, housed in a wooden container, will be called Sustain.

“I felt that the French didn’t want me,” he said. “But now I feel it’s the safest place for me.”