The French contemporary label known for its premium raw denim will be launching its first collection of stretch denim today. 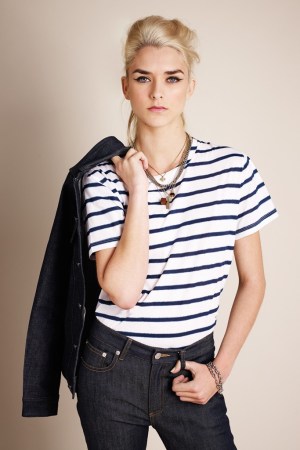 A.P.C., the French contemporary label known for its premium raw denim, will be launching its first collection of stretch denim today.

The Lycra spandex and cotton range will be sold worldwide and will be featured in the women’s line with three new styles, while the men’s range will feature an elastane blend in three existing styles that are also unisex.

A.P.C. had early success with the introduction of Japanese raw denim, cut in select, classic styles. Raw denim is credited for giving A.P.C. its name in fashion, but even denim experts generally agree that raw denim can be unforgiving on the wearer, specifically women.

Jean Touitou, founder and owner of the 27-year-old brand,  said he spent years perfecting the stretch styles, which mimic raw denim in appearance and aging, but offer a new level of comfort.

“I felt the time was right to be more comfortable,” said Touitou. “Sometimes people don’t want change, but it worked for Bob Dylan when he turned to the electric guitar. Raw denim still works, even after 27 years. It just made sense to offer something more comfortable for feminine styles.”

The range will be rendered in black, stone wash and a washed indigo. Styles will include a skintight silhouette with a rise that falls beneath the belly button, an ankle-length low-rise design and a high-rise wide-leg look. Three new denim skirt designs will include a Seventies-inspired skirt that falls above the knee with patch pockets in stretch stone wash. Suggested retail will be $195 to $210.

Touitou explained that incorporating Lycra into washed styles of denim is a painstaking process and can be “very tricky.”

“You want denim to fade but if the water in the mix is too warm and the bleach is too harsh, you can kill the benefits of Lycra,” he said.

Asked if the stretch jeans are similar to what the fashion industry refers to as “jeggings” — a combination of leggings and jeans — he replied: “Ce n’est pas possible. That would be a crime against humanity. It’s 2 percent Lycra.”

Paris-based A.P.C. sells its products in more than 50 brand stores around the world, including in Paris, New York, Los Angeles, London, Hong Kong, Berlin and Tokyo, as well as more than 200 wholesale accounts that include Barneys New York, Nordstrom and Saks Fifth Avenue.