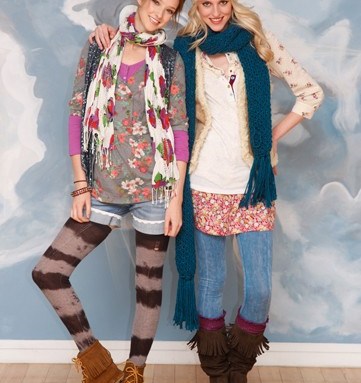 In her latest role as fashion designer, Selena Gomez is dreaming loud.

The 17-year-old star, best known for her leading role on The Disney Channel’s “Wizards of Waverly Place,” is getting into some new territory with the fall 2010 launch of her first fashion brand, called Dream Out Loud by Selena Gomez.

“Growing up in Texas, I was sort of close-minded and kind of a tomboy, but as I’ve traveled, I found such a love of clothes,” Gomez said while primping for a day of filming on the set of “Wizards of Waverly Place.” “It’s really always been a dream of mine to have a line.”

So with the help of a group of industry experts, Gomez teamed up to create her brand which focuses on “pretty, feminine and bohemian” clothing — a line, she said, that mirrors her own style. To get her started, her agent at Creative Artists Agency in Los Angeles set Gomez up with Tony Melillo, former Generra designer and designer of his own namesake men’s wear brand, and Sandra Campos, who has spent about 20 years on the business end of the industry at brands such as Nautica and Polo Ralph Lauren. Melillo and Campos had just started their own licensing and brand building firm to develop and market global lifestyle labels specifically for celebrities. That company, called Cynosure Holdings, was already speaking with CAA clients when they came across Gomez.

“She has such a good sense of what she likes and what she doesn’t like,” said Melillo, who is the creative director for the Dream Out Loud by Selena Gomez line. “It was surprising as I’ve never worked with someone so young, and never really expected her to be that smart. She has a desire to be involved, and nothing is sent out there without her approval. It’s nice to see her have this genuine interest.”

And, Gomez said, she has been quite picky about every detail.

“When I met Tony and Sandra, I was instantly comfortable with them and now they are like family to me,” she said. “They are so creative and I love how I can just call them up whenever and talk to them about everything, even if it’s just about changing a button. They’ve been so cool about everything.”

To manufacture the line, Melillo and Campos teamed with New York-based Adjmi Apparel and formed Adjmi CH Brands LLC, the holding company for the Dream Out Loud brand. Together, the partners hold the master license for the label and are in the beginning stages of meeting with licensees for products such as handbags, footwear and jewelry. To start, the company plans to launch a full sportswear collection for fall 2010 selling — Boho dresses, floral printed tops, jeans, skirts, jackets and some accessories such as scarves and hats. Most of the collection is made in an organic soft cotton and all fabrics are recycled or eco-friendly in some way, which was important to Gomez. All items within the collection are made to be mixed and matched, even with the ability to mix prints.

As the youngest UNICEF ambassador ever, Gomez said she wants to be someone her fans can look up to in everything she does. So it was especially important for her to incorporate this message into her line.

“With my line, I really want to give the customer options on how they can put their own looks together,” she said. “I want the pieces that can be easy to dress up or down, and the fabrics being eco-friendly and organic are superimportant. Also, the tags will all have some of my inspirational quotes on them. I’m just looking to send a good message.”

The business plan, according to Campos, is to find a retailer, whether that be mass or midtier, to partner with exclusively. Since the company is looking for a retailer to partner with on the launch of the brand, prices have yet to be worked out, as well as first-year sales projections.

“We hope to partner with a store which can offer the brand the presence on the floor that it needs,” said Campos, who heads up business operations. “We want to showcase the whole lifestyle in a way that’s easy for the customer to understand all in one place.”

Melillo said he sees the brand competing in the junior sportswear space, but with a niche not seen on the floor.

“Miley Cyrus at Wal-Mart is a little more rock ’n’ roll, and Avril Lavigne’s line at Kohl’s has that edginess,” he said. “There seems to be a void in that space for the girl who is looking for feminine, pretty clothes.”

The brand is based in Adjmi’s offices in a separate showroom at 500 Seventh Avenue in Manhattan. While Mark Adjmi, president of Adjmi Apparel, said he has been approached by various celebrity lines over the years, he couldn’t help but pay attention to Gomez’s plans.

“I have two daughters — 11 and 18 years old — and they are not the kinds of kids who get starstruck,” he said. “Every time I run an idea of a celebrity line by them, I get a thumbs down. When I mentioned Selena, they were instantly so excited, so I knew we were on to something. As I got closer to the deal and understood the star power this girl has, it was a win for me.”

In addition, the company has signed Lloyd & Co., a New York-based advertising and branding firm, to handle the marketing strategy for the Dream Out Loud brand.

Besides her work with UNICEF and her Disney Channel show, Gomez released an album on Sept. 29 and also recently finished filming “Ramona and Beezus,” a film based on Beverly Cleary’s popular children’s book series. She plays Beezus in the movie, which is due out early next year. So how does a 17-year-old manage to balance all of this?

“I have to admit, it is a little hectic at the moment,” she said. “But I love what I do and it really doesn’t feel like work to me, which makes it all easier.”