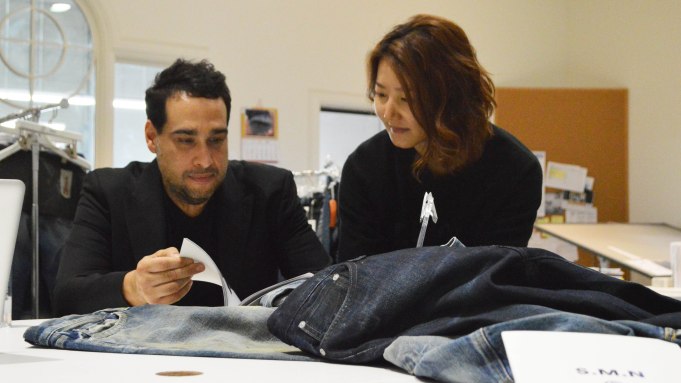 The designer and founder is serious about quality and when she talks about her men’s brand being a premium denim company, she wants people to know it.

“S.M.N. Studio is a little studio and we want to manage from A to Z here so that’s the real difference — the quality control and I think that’s the real premium denim instead of producing a big quantity from Mexico,” Kim said. “We’re overseeing everything. As a designer, I see what’s shipping out and then I make sure it’s the same quality from what I developed. Country of origin [where it’s made] makes a huge difference. When everyone’s moving their production to China or Mexico to meet that sweet spot retail price point, we’re not doing that.”

S.M.N. (Simple Modern Nonpareil) was founded in 2015, with its first collection launched for fall 2016 and sold exclusively at Ron Herman.

The Vernon, Calif.-based company is now sold at a number of specialty retailers including Fred Segal,  Brooklyn Clothing, Blue in Green, Brooklyn Denim Co., Khaki & Black, American Rag and Ron Herman among others.

Reorders are giving the brand confidence it’s doing something right in a market where the term premium denim is overused and doesn’t necessarily mean premium anymore.

“Launching a new brand can be very tricky and difficult, especially shipping new product to retailers and getting a good response,” said Mark Tourgeman, the company’s brand strategist. “In the last two or three months, we’re getting consistent reorders, which I haven’t seen since probably 2005, 2006 when the business was good.”

About 1 percent of the line, a novelty collection, is made in Japan and sells at a higher price point. Everything else from S.M.N. is made in Los Angeles with Italian hardware and Japanese denim that’s cut and sewn in the factory and laundered in Gardena, Calif.

Price points typically range from around $189 and go up to about $275 for the main collection, with the Japanese-made capsule consisting of $450 jeans and jackets retailing for about $600. S.M.N. exists at the midpoint, a cross between the trucker, workwear-inspired denim of a label like Levi’s and the rawness akin to a brand such as A.P.C.

The two denim veterans met at Hudson Jeans nearly a decade ago with Kim also having clocked time as a designer at GoldSign, AG Jeans and Citizens of Humanity. Meanwhile, Tourgeman started off in retail in the Eighties and was the first denim and sportswear buyer for American Rag. He went on to open his own stores selling vintage denim before jumping to the manufacturing side working at Hudson, Rock and Republic and William Rast before launching the Strom brand. He joined Kim about a year ago to build S.M.N.

The two are taking their knowledge of denim and applying it to a customer base that’s now more discerning and smarter about their denim ABCs.

“My interest is mainly in fabric development and the technical side,” Kim said. “Back then [in 2004] it was all about the back pocket. It was all about the branding. If you have those pockets, then it’s sales. People would pay $200 or $300 per pair. Now, I think customers are a little more denim smart. Technology is such a big thing over Instagram. Back in the day, nobody cared about selvedge denim, but now the customer shopping at Fred Segal or Ron Herman, they’re looking for selvedge denim and their knowledge level is crazy. I’m trying to target that niche market, the customer who doesn’t want crazy exterior branding.”

Their timing is right as the market searches for a new generation of denim brands, Tourgeman said.

“Top retailers are looking for something new and something special. If you look at the trends and go back through the decades, when I was around in the Eighties, the shelf life was 10 years and then they go into mass production [overseas] and that’s what’s happening now and so there’s a void in the contemporary market now,” he said. “Lines like ours and I would say even in the women’s arena [Revolve’s] Grlfrnd, they’re starting to come out doing something a little different. You see it in the washes. It’s different. It’s new and it’s done right. I feel like we’re the new brands that are starting to get real estate in the stores and it’s being pushed by the consumer.”

The company recently released sweatshirts retailing for $179, dabbling a bit outside of denim, but Kim is more measured about any sort of expansion even if Tourgeman sees opportunity through retailers knocking on the company’s door to produce more.

If they were to do women’s, it would be to test at one or two retailers and the earliest that might happen is for spring 2018, Tourgeman said.

Kim, for her part, said her interest remains focused on men’s and it’s largely for practical reasons.

“The men’s customers are more loyal. They’re not trend-driven. Girls they see some picture on Instagram and say ‘Oh, I want this.’ They’ll place an order online based on a picture,” Kim said. “Guys don’t do that. Guys go to the store and if they like the fit and they like the fabric, they’ll ask their wives or girlfriends to pick up another pair.”

Continuing to build out the wholesale business, at least for now, is also important for S.M.N. rather than turning to direct-to-consumer. Going the direct route via online would seem to be the antithesis of the premium denim experience the two are looking to build out, which is a focus on a niche, specialty consumer. The market, they say, would seem poised for them to grab share doing just that.

“When we see these reorders come in, that’s stuff that hasn’t happened since before the recession,” Tourgeman said. “So I think there’s definitely a need and I think the bigger retailers will finally wake up and smell the coffee. A lot of these buyers are so scared to test anything new, but if they don’t start, they’re going to start closing a lot more brick-and-mortar stores like what a lot of these other chains are doing now. There’s no newness.”

For More Denim Coverage in WWD:

Maje to Play Up Denim Capsule in Latest Campaign to Grow U.S. Sales