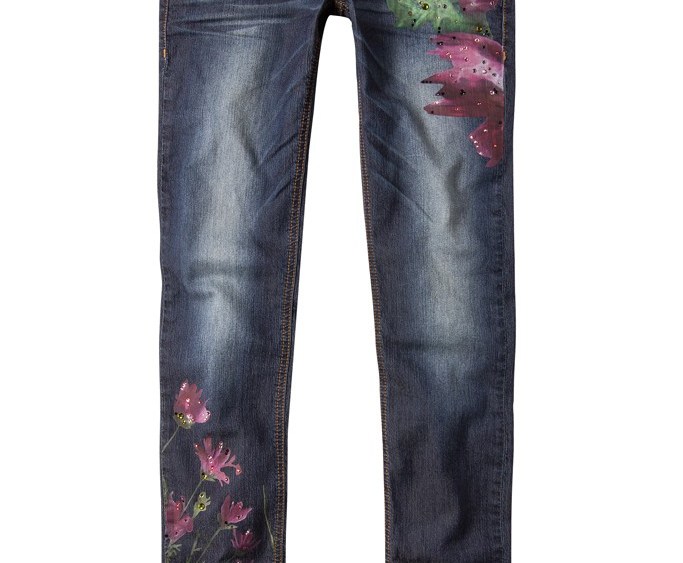 BERLIN — Jeanswear buyers scoured the recent round of trade shows here for dressier denim at all price levels as brands look to emerging markets like Eastern Europe to boost their sales.

With slow growth in the U.S. and much of Western Europe, manufacturers focused on emerging markets, along with Japan and less mature markets in Asia, to sustain business into the spring 2014 season.

Participants in the Bread & Butter, Premium, Seek and Bright shows here this month said the denim business has been relatively stable against a backdrop of economic turbulence. But unseasonable weather left inventories high on both sides of the Atlantic, and the ongoing euro zone crisis kept some buyers from southern Europe away from Berlin. The versatility of jeans, and their central role in most consumers’ wardrobes, provided them with a degree of insulation, buyers said.

Sustainability remained an important talking point for many at the shows and variations on jean models — including dressier looks and pants-jeans hybrids adorned with elastic waistbands and cuffs, drawstrings and even knee pads — garnered considerable interest. So did tailored interpretations of denim that pushed the fabric into areas like suits and blazers, even as others experimented with more casual and active interpretations of jeans.

More mainstream treatments in denim included coated denim and animal prints. And the boyfriend jean is making a bit of a comeback even as the market for women’s jeans remains heavily focused on the skinny silhouette.

Berlin also attracted buyers from Asia. Specialty chain Star Fashion, with more than 500 stores in Thailand, Malaysia, Cambodia and Myanmar, was shopping Seek and B&B. “Trends are the most important thing for our retail business and we found many, especially in footwear, at both Seek and B&B,” said managing director Viphop Tatiyamaneekul. “Our focus is on the up-and-coming brands because they are directional. Our customer is more interested in European brands because they have more of a story to tell.”

There was also a surge of Japanese brands exhibiting at the fairs as well as a rise in Japanese buyer attendance. Takeshi Mori, owner of the 20 B Shop units in Japan, was spotted at Seek looking to build on a brand selection that includes John Smedley, Sunspel, Barbour, Johnston and Maison Thomas. Mori noted: “For our customer, quality is very important, as well as fashion. We shop for very specific brands and specific products that we were able to find here.”

A newcomer at B&B was Japanese denim brand Orslow, which featured easy-fit denim climbing pants priced to retail at about $215. Ichiro Nakatsu, owner, said, “This was the right time for us to show here and offer our brand to the European market.”

Another notable Japanese brand was Johnbull, which showed relaxed classic suits for men in linen-cotton indigo denim and light denim blazers paired with light denim drawstring trousers in addition to a relaxed collection for women featuring floral trousers and tops. Standouts included 14-oz. linen-cotton jeans that retail for about 250 euros, or about $330.

In search of directional brands was German shop Bube und König located in Nuremberg. “We are a new shop and for us to stand out we have to bring very special items to our customer,” said co-owner Steve Kautler. “We see good quality and directional design from the Japanese brands.” Kautler said he was particularly impressed by Japan Blue and Rokker Jeans.

Brands focused on sustainability were in evidence throughout the fairs. At Premium, Haikure, an emerging Italian brand, presented a new generation of hyper-stretch skinny jeans developed in partnership with ISKO, the Turkish denim giant that has used wind, water and solar power to reduce its carbon emissions to levels 60 percent below those required in the European Union. According to Federico Corneli, owner of Haikure, the new stretch jeans are priced to retail at about 140 euros, or $185, and, like all Haikure merchandise, made from certifiably sustainable materials.

Another newcomer at Premium was German denim brand Wunderwerk, which uses the motto “no chloride, no potassium and no plastics.” Heiko Wunder, principal of the firm, noted the company’s quest for growth had it looking to the east. “We have several agents in place but we are not looking west yet. We see a better market for us in the Eastern European countries,” said Wunder.

Also at Premium, Germany’s Goodsociety showed eco-friendly jeans in the premium category alongside natural canvas jackets with asymmetric pockets. Denim suits for men and women were shown in “blu raw” and “ecru raw.” New for 2014 was a laser-printed herringbone denim using minimal water and no chemicals.

Rebekka Bach, women’s design director for G-Star Raw, said, “For spring 2014, it is all about dressing up the jeans with heels, lipstick, styling your hair and looking feminine. Our new look for the season is the feminine boyfriend jean, which we call the denim Nonchalant. We made a new range of effortless cool loose jeans that must never be dressed down.”

On the luxury end, German brand Blessed & Cursed’s new collection featured denim jeans, jackets, skirts and tops with hand-painted flowers and Swarovski crystals as well as coated denim. A denim dress retails for about 899 euros, or $1,190.

Blue de Gênes, a denim brand from Denmark, featured jeans that were sprayed and washed for a soft hand. Notable were Italian-made Repi-coated jeans that retail for about 189 euros, or about $250, and constructed denim blazers that retail for about 270 euros, or about $355. Brand manager Nikolaj Madsen said that in the firm’s sixth visit to B&B, he saw fewer people but the “right” people at his stand. “B&B is a more professional show,” said Madsen, adding that Germany, Denmark and Norway are the company’s strongest markets.

Swiss specialty store Spotshop — which carries G-Star, Edwin Jeans, Maison Scotch, Happiness, Vans and Converse — came to the B&B fair looking for specific items in the streetwear, accessories and footwear categories. Hubert Thomann, owner of Spotshop, said, “There are a few special brands such as Blue de Gênes, G-Star and Edwin that stood out.”

Price in general was less of an issue this season. Rather, denim brands across all price points said they are promoting innovative fabrics and styles to create or sustain consumer interest. Transfer’s buyer and distributor Mutsumi Sato said, “Consumers are now willing to spend more for their favorite type of clothing, and jeans are a wardrobe staple. In luxury and premium denim, we experienced a growth in sales and we see a trend in higher-end denim.”

At Bright, KR3W Denim, a Los Angeles-based brand that claims to have produced the first stretch slim-fit skateboarding jean 10 years ago, featured pro-rider jeans made with stretch denim from Cone Denim with contrast yellow stitching and the standard yellow drawstring special for skateboarders for about 75 euros, or about $99, at retail and also featured coated wax denim in slim fit and raw denim for 59 euros, or about $78 at retail.

At Bright for the first time was EandMo, a new denim brand from Munich featuring knee-padded, elastic-cuffed denim jeans called Air Jeans, which retail for about 110 euros, or about $145.

At B&B, Maryam Monschizada, owner of specialty shop Ruby in Munich, was trying on jeans and placing an order at The Local Firm, a fashion jeans brand from Sweden. Ruby is a fashion store that carries Acne, Won Hundred, Johnnylove, Humanoid, David Andersen and Scandinavian brands.

She said, “Even though Munich is a very conservative city, my clientele is looking for edgy and cool brands, which I found” at the Berlin fairs.