It wasn’t just fashion week in the city recently, but also denim week, as a string of jeans-based stores opened. 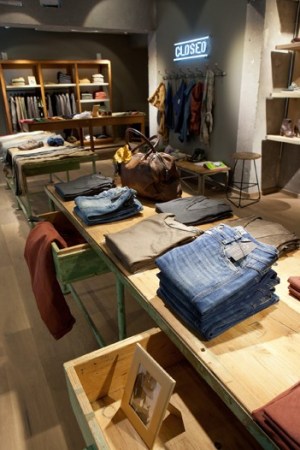 True Religion, Closed, Scotch & Soda, an overhauled Mavi door, a Meltin’ Pot pop up and Superdry joined players like Levi’s, Lee, Acne, Gas and Diesel all within a 1,000-foot radius, consolidating the Hackescher Markt neighborhood in Mitte as denim row.

“It’s an area where cool people are running around,” said Reinhard Haase, managing director of True Religion Germany GmbH. “It’s the street where we belong.”

While declining to reveal a sales target, he said with the 1,291-square-foot Berlin store in a neighborhood of denim flagships, presence is also about representation.

With True Religion’s jeans prices starting where its neighbors’ end, young shoppers, the area’s main customer base, might be hard to attract. Haase figured it will take a year to bring True Religion’s customers to the store. Previously occupied by a fashion boutique, the new flagship is symptomatic of denim labels taking over the neighborhood.

Karl-Heinz Müller, owner of 14 Oz., has teamed with Closed on a joint store on Alte Schönhauser Strasse.

“Our brand sold so well at the main store that Karl-Heinz Müller kept wanting to do more,” said Gordon Giers, one of three managing directors at Closed. “The building is theirs, but the content is ours.”

The brand is seeing double-digit growth, both in the U.S. and at home, and a similar story is happening at Mavi down the block. The Turkish label is growing 30 percent annually in Germany. With increased floor space, Mavi’s newly renovated Berlin door is expected to generate 1 million euros, or $1.39 million, in annual sales.

“So we do earn money here,” noted Mavi’s general manager, Cüneyt Yavuz. “Berlin is after all the capital of Germany and Germany is a denim country.”

Also expanding in Germany is Scotch & Soda. The Dutch brand, which was just snapped up by Kellwood Co., has recently opened in Hamburg and now cut the ribbon on Münzstrasse. Its jeans category has seen rapid growth since starting for spring 2011, accounting for 20 percent of the brand’s business. There are jeans-related skirts, dresses, tops, bags and even bikinis, while pants are strong on detailing, revealing striped patterns on inside cuffs or lucky coins found in jeans pockets. In fact, the entire brand is aiming to be found by chance, taking a word-of-mouth approach in terms of communication.

The focus at most of the new stores is on design, and like the area’s other newbies, Scotch & Soda’s new location to some extent got the industrial treatment reflecting Berlin’s still unfinished vibe.

At Superdry, steel pipes serve as clothes racks, while raw wooden trusses are nailed to True Religion’s walls, similar to the elements used at Weekday’s second Berlin location opening in mid-August on denim row. Across the street, Mavi has built a denim kitchen where jeans are piled up between culinary equipment.

As Yavuz explained, “In a few years, we want to own Berlin.”