Blue Cult will reintroduce itself to the U.S. market for spring - as a moderate brand. 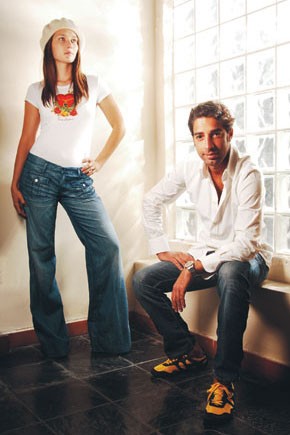 LOS ANGELES — Blue Cult will reintroduce itself to the U.S. market for spring — as a moderate brand.

A pioneer in California’s premium denim business, Blue Cult is reentering the market two years after its last domestic shipment. Frank Mechaly, who also designs premium brand 575 Denim, has taken the reins and is looking at Blue Cult’s past to build its future.

Mechaly has returned to Blue Cult’s original fit and elaborate U-shaped back-pocket embroidery for the initial collection that includes 15 women’s styles in faded denim, white linen and cream twill. All styles will retail for $89.

“It’s hard selling $150 jeans anymore,” Mechaly said. “The consumer is looking for a premium product at a lower price.”

Mechaly is banking on an updated version of one of the brand’s most popular styles, Gwyneth, named in honor of Gwyneth Paltrow. The actress put the brand on the map after being photographed wearing a Blue Cult style in 2000 that featured a form-fitting silhouette, a slightly flared leg and two tiny front pockets. To prevent Gwyneth from looking dated, Mechaly widened the leg opening to 26 inches and added back pockets.

Mechaly understands that the challenges for Blue Cult will be greater than before. The label stopped shipments in the U.S. in spring 2006 because of late deliveries that soured relations with retailers. The brand’s European and Japanese distribution has been uninterrupted.

“Blue Cult was a victim of the denim boom,” Mechaly said. “I don’t think they were on top of the product and they were sloppy — so late [with deliveries]. The only way to build the trust is to ship the right product and on time.”

Mechaly’s father, David, cofounded Blue Cult with his wife, Caroline Athias, in 1999. The brand quickly expanded to 200 employees and sold in 800 retail doors in the U.S., 800 in Europe, 150 in Japan and 150 in other regions. Annual wholesale volume for Blue Cult eventually reached as high as $60 million. Offshoot brands also emerged, including Blue Cult Knits, Blue 2, Sacred Blue and Elite by Blue Cult. Mechaly designed Sacred Blue until he left to start 575 Denim in 2004.

The premium denim segment has faced significant pressures since Blue Cult exited the U.S., as retailers have opted to focus on a core group of top-performing brands and gradually have shifted their assortments from denim toward dresses and contemporary apparel. Even at 575 Denim, which wholesales from $90 to $120, Mechaly said he will introduce basic styles wholesaling for $69. He also plans to find a licensee to produce Coil, the other moderate line that he designs. Coil’s spring collection will be the last one he’ll spearhead.

“The price point is going down [in the premium business],” he said.

With the first shipment scheduled for March, Blue Cult’s 15 styles include straight-leg jeans punctuated with red and yellow stitching, a boot cut in a black rinse with a four-piece yoke in the back and the Gwyneth in a faded 10-oz. denim.