Simply Blue Apparel, the Seattle-based manufacturer of the Christopher Blue denim brand, is targeting another demographic with its latest label, Blue House... 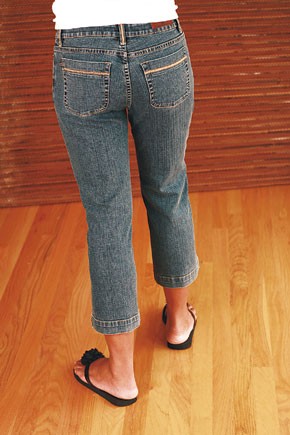 Simply Blue Apparel, the Seattle-based manufacturer of the Christopher Blue denim brand, is targeting another demographic with its latest label, Blue House Drive.

Mel Matsui, chief executive officer of Simply Blue Apparel, is looking to tap into what he views as an underserved but growing market of older, larger women who are looking for more fashion choices at retail.

“We’re trying to provide the more mature customer with their own look and their own vibe,” said Matsui.

Blue House Drive rounds out Simply Blue Apparel’s portfolio of denim brands. Christopher Blue has been the company’s bedrock label, catering to women who covet the slender cuts and low rises of most trendy jeans lines but need a fit that is more forgiving. This spring, the company introduced Pine IV, it’s first pure-play premium offering, retailing for more than $200 and designed for the more fashion-conscious consumer. Blue House Drive, said Matsui, represents a logical next step from Christopher Blue.

“We took what we consider our fit and just brought it out a little and brought it up a little bit,” said Matsui. “It’s a little more comfort driven and a bit more tasteful.”

The line retails for around $100 and is available in high, medium and low rises. Matsui acknowledged the target consumer for Blue House Drive is one who will follow trends rather than set them. As a result, washes and other stylings will play it conservatively, catering to the strengths of the department store environment.

Test orders began retailing this holiday season at Nordstrom and a select group of specialty stores. Matsui said that early response to the line has been positive, but he isn’t counting on explosive growth. He’s confident the company’s solid footing with retailers and its sourcing and manufacturing practices allow it to test the market without creating excessive risk to the overall business.

“If it happens, it happens,” said Matsui. “If it does happen, then we’re ready to roll it out with all the right production.”

He’s equally confident the potential Blue House Drive customer is largely being left out at retail and may only have one or two pairs of jeans in her wardrobe. He also believes that, as Baby Boomers age, they will demand more fashionable apparel options.

“I feel this segment of the population is getting hipper,” he said. “The malls are so hip now. Who would have thought years ago there would be a Hugo Boss store in every mall in America?”