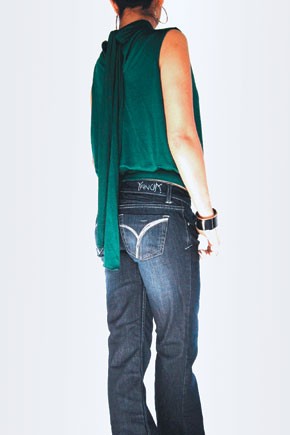 With a flailing economy and fashion-conscious shoppers wanting more for their money, there’s been an influx of lines joining a sub-premium price range of $65 to $125, with $100 being the average.

For years, the only real choice for young teen girls was shopping for their jeans in the junior area, spending no more than $50 for a new pair. But the quality and styling weren’t always the best. Then the premium category got hot, with lines such as Seven For All Mankind and True Religion rolling off the racks at price tags of $200 or more.

“As a consumer, I honestly got tired of the high prices in premium,” said Noelle Collet, director of sales at Blank, a New York-based brand launched last year by the makers of Odyn. “I just couldn’t understand why I couldn’t get a great-looking pair of jeans for a lower price.”

Collet said while Odyn was doing fairly well at retail, she was starting to see stores getting more price sensitive in their buying. This led to the development of Blank, which now sells at high-end specialty stores such as Intermix, Neiman Marcus Cusp and Kitson. For the summer, the brand launched a small collection of graphic T-shirts to go with the jeans. Styles include a range of skinnies — from a dark black denim to a white high-rise — a straight leg and a flare. Collet said the company is working on expanding the collection for fall. Blank wholesales for $14 to $32.

“This customer doesn’t want cheap jeans, like the ones they can find at Forever 21 or H&M, but they also don’t want to spend the high prices of Seven For All Mankind or Citizens of Humanity,” said Ron Poisson, president of sales at the New York-based Anoname Jeans, which sells jeans at $78 ($36 wholesale) a pair. “This customer does recognize value and quality, which is what we aim to achieve.”

Poisson said he is able to keep costs down by manufacturing his own denim. Instead of buying the fabric from mills, he prefers to buy the cotton and then produce the fabric in Anoname’s own factories in China. The result is an extensive line of denim jeans in various washes and six fits — skinny, straight-leg, boot-cut, trouser, wide-leg and flare. He said Anoname’s designers pay close attention to offering fashionable, trendy washes each season — such as with brown tinted denim and the dark black jeans — and even the company’s basic styles have some element of novelty, such as with the basic jeans with flap back pockets.

Finding the right manufacturers and remaining creative seems to be the formula for success in this segment of the denim market. For Cheap Monday, which launched at Barneys New York in the U.S. a few years ago selling jeans for $65, finding the right factories and creative balance has been key.

“We started out working with qualities that were unwashed and produced them in China,” said Lars Karlsson, chief executive officer of Fabric Scandinavian, Cheap Monday’s Swedish-based parent company, which has been selling the brand abroad since 2004. (For more on Cheap Monday, see page 46.) “Now we have larger quantities and can make new washes and do our own special weavings. It’s about being creative within a budget level, and our belief is that being creative is not the same thing as being expensive.”

Fresh Ink, a denim brand that retails for $98 to $129, is able to offer premium denim at a lower price tag because of its “modern vertical infrastructure,” said company president Ron Gelfuso.

“I don’t think that there is a premium business at $80 because this ‘movement’ is about bringing premium quality fabrics to the market while trying to bring value at the same time,” Gelfuso said. “This is the logic that I started out with when formulating Fresh Ink. It had nothing to do with a price point. We offer a variety of denims within each silhouette and finish each differently. The effort is to create unique pieces or stand-alone quality looks within the same silhouette rather than the sameness of offering one denim in one silhouette with many different back-pocket treatments. I think our approach brings attention to the entire silhouette and its beauty rather than focusing on one dimension of the product.”

Blue Holdings Inc. has also recently made an effort to appeal to a broader customer base with its Yanuk label. The brand, which used to be sold in the high-end premium area, has adjusted prices, now wholesaling between $40 and $50, when it used to wholesale between $88 and $115.

“The mid-premium market segment is about accessibility. Customers want trend-right, high-quality merchandise at affordable prices,” said Burt Damsky, president of sales for Yanuk. “The $80 to $100 price point makes premium-based denim and sportswear accessible to a broader consumer base. We decided to get into the mid-premium market segment because we feel there is tremendous growth opportunity. It is an underdeveloped area at retail with a growing customer demand.”

Damsky said he is able to lower Yanuk’s price points because of the relationships the company has with its factories.

“Our production and sourcing team works very hard to negotiate costs, to source overseas for prices and quality, which allow us to compete in the market,” he said.

Susan Woo, creative director at the Los Angeles-based Level 99, said when the brand launched four years ago, it had a great deal of difficulty entering the market, since there wasn’t much room on the selling floor for a lower-priced premium brand. Now, she said, Level 99 is doing well in the various stores that carry the line, including Macy’s, Bloomingdale’s, Anthropologie and Lisa Kline. Woo said the company has developed close ties with its contract factories in Mexico and in China to keep the prices on the low end. Level 99’s jeans retail for $100 to $120.

“I think our biggest challenge is to keep our product current with premium value while offering the lower price point,” Woo said. “Our customer recognizes quality, value and style. We just strive to provide all of those features.”

It’s a similar story for Miss Me, where the company is able to provide premium quality denim through overseas production where labor costs are lower. The Miss Me Jeans line wholesales for $35 to $45 and sells to stores such as Nordstrom, Macy’s, Dillard’s and Buckle.

“Factories overseas have really improved their quality over the past couple of years, which allows us to create this quality product at a price,” said Steve Yoo, brand manager for Miss Me. “This is a market that is clearly growing, with plenty of opportunity, especially in these changing times where more shoppers are getting more conscious of how they spend their money.”