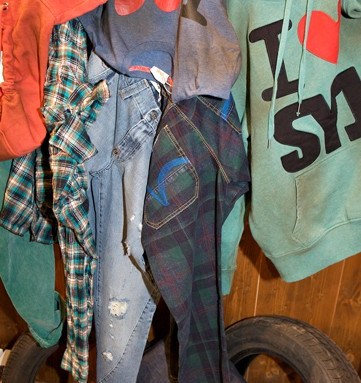 BARCELONA — Last week’s edition of Bread & Butter Barcelona proved to be its last.

The sportswear and contemporary apparel show hosted eight shows over four years here. Organizers said 800 brands exhibited at the show, representing a decline of 160 brands. The number of visitors fell by approximately 9,200 to 79,942. The show concluded its three-day session on Jan. 23.

“All in all, we were able to greet more than 600,000 visitors in Barcelona during the last four years here,” said Karl-Heinz Müller, who founded and organizes the show. “We advanced to become the international leading trade show for street and urbanwear in Europe. Barcelona was a great choice. However, it’s time to move on.”

Müller did not indicate where future shows would take place. However, he subsequently revealed the show will return to its hometown of Berlin and hold future shows at the abandoned Tempelhof airport. (See accompanying sidebar.)

Denim companies exhibiting at the show pushed for simplicity and a back-to-basics approach, while luxury vendors stressed quality. Women’s fashion trends ran the gamut of silhouettes, from roomy boyfriend styles and Seventies-inspired flares to straight and skinny drainpipes with rip-and-repair treatments in worn, roughed-up washes and a stiffer, more resistant denim.

“There are lots of options and they’re all important looks,” said You Nguyen, senior vice president and creative director of Levi’s Strauss & Co. “It’s how the customer pulls them together that makes the difference. In bad times, consumers want a brand with substance and human truth. Price is not the major consideration. The issue is does the customer like the brand or not. For 2009, we’re moving with caution. In a difficult environment, we try to communicate meaningful stories to the consumer.”

Levi’s women’s side featured lightweight fabrics combined with a soft hand, raw-edged cut-off vests, skirts and shorts in vintage denim. For men, chinos are updated with leather trims and jeans hark back to a classic silhouette in dark finishes with down vests and jackets.

The Dutch label presented a small range of organic denim, squared-off boxy jackets and pants for men, short and long skirts for women, a rugged “Bronco” grouping of plaids and Nordic patterns inspired by the Canadian outdoors, and a luxurious 60-piece collection by Marc Newson, back in G-Star’s creative fold after a two-year hiatus. The well-known industrial designer referenced the late Eighties with stylish nylon ski jackets, sweatshirts, sweaters and T-shirts with a pastel color palette and air-brushed details.

Despite the bleak global economic conditions, brands are still chasing opportunities in new markets. Midmarket German brand Mustang, with a yearly production of four million jeans, is pushing forward with expansion plans. Forty stores are set to launch this year in Germany, confirmed president Heiner Sefranek, with up to 40 additional locations planned for Asia, India and Russia.

“Everybody is working harder for their money,” said Te Pas. “Suppliers are friendlier, and in general, the arrogance is gone. Last year, we sold 39 percent more than 2007 in our own shops.”

The Dutch label operates three stores in Holland with the imminent launch of a Cape Town unit and three in-store shops coming up in Amsterdam. In addition, Blue Blood distributes through 750 international sales points “and we’re in talks with potential retail partners in Dubai, Turkey and China,” he confirmed. The next step is growing wholesale accounts in the U.K., Scandinavia and Belgium.

Barcelona sportswear brand Desigual is headed to New York, according to Lise Epperlein, New York corporate sales manager. The privately owned company, maker of quirky mix-matched separates and novelty knits for women and men, will open a showroom on 37th Street next week, with major product launches at MAGIC and Project in Las Vegas.

“Our goal is to open a flagship in New York by year’s end,” Epperlein said. “Currently, we are scouting locations on the West Coast.”

The brand has no U.S. business right now “and we’re anticipating a slow start, but it’s a great opportunity to launch because consumers are looking for something they don’t already have in their wardrobe.”

Custo Barcelona came up with a slew of dresses in silk satin and rayon mixed with soft wovens like angora and cashmere.

“The U.S. market is not easy, but we’re still opening stores” in Florida and Hawaii, said co-owner Custo Dalmau. The economic downturn is triggering “closer communication with the consumer through direct online news and advertising.”