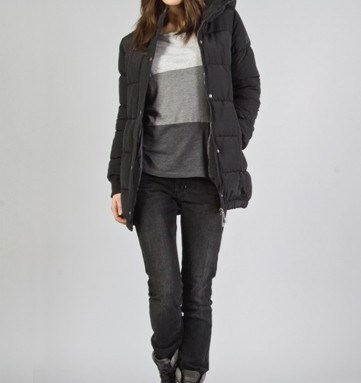 BERLIN — Despite snow and ice, vendors at Bread & Butter reported strong foot traffic in the trade show’s second season since returning to the Tempelhof Airport here.

“While the buyers last time tended to be mostly German, this time around we have met people from all over the world,” said Julie Osborn, a sales representative from Selected, a new label from Denmark’s Bestseller Group that produces wardrobe staples such as tweed coats, long knitted wool cardigans, cotton shirts and fitted boot-cut jeans.

“Most of the interest was in our more unusual items, such as our layered cotton T-shirts or sequined harem pants,” Osborn said. “In the current economic climate, buyers want to go after something other people won’t have.”

The growth of the show has helped alleviate some fears about the impact of its move from to Berlin from Barcelona.

“I was apprehensive when Bread & Butter moved from Barcelona back to Berlin, but it has been really good for us and keeps getting better,” said Connie Feast, marketing executive of U.K. streetwear brand Bench. “Knitwear, skinny jeans and cotton dresses sell really well for us.”

The brand is robust in Germany and Canada, and the label opened more than 20 stores internationally last year.

In denim, boyfriend jeans will continue to be featured prominently next season, and the style was seen in collections throughout the show and on the catwalk at Diesel.

“There is something sexy about masculine cuts in women’s wear,” said Gigi Vezzola, creative director of Italian denim giant Replay.

We Are Replay, the company’s high-end experimental line, featured new additions such as a green wash, graphic prints and a denim and a bouclé tweed jacket.

Skinny styles are another trend that brands will carry into the winter season and were key items from the likes of Replay, Diesel and Firetrap.

Danish brand Dept introduced its latest denim collection, Starsign, during the show. Styles have been named after astrological signs and the collection is aimed at capturing younger consumers. The Capricorn is a high-rise and fitted pale denim style, Aries features punky studded leather and the Libra offers a choice between low-slung chinos and loose-fitting boyfriend jeans.

Bread & Butter ran concurrently with the 15th edition of Premium, which pulled in 41,807 visitors over the four days, an increase of more than 10,000 from last season. Buyers and exhibitors were impressed by the slick layout and high quality of brands taking part. About 48 percent of buyers were from Germany, with the remainder largely from other European markets. Buyers from Japan, China and the U.S. made up only 3 percent of the pool.

Lisa Chronpoulos, international sales manager of Los Angeles-based Hudson Jeans, said although the brand used to show at Bread & Butter, the move to Premium had been positive.

“People are actually writing lots of orders at Premium,” she said. “It’s good.”

Hudson’s collection focused on wearable, unfussy denim in black and dark blue. Among the fitted drainpipes were boyfriend jeans with a low crotch and some black denim, knee-length shorts.

Los Angeles-based Siwy Denim featured funky items such as sequinned leggings and black drainpipe jeans with perfectly round holes punched in them. The tongue-in-cheek denim has been worn by Kate Moss and Sienna Miller, and the label’s stonewashed jeans, lacy leggings and cropped shorts attracted interest among buyers from Saudi Arabia, Italy and France.

While Bread & Butter and Premium enjoyed a steady stream of visitors, Jam, the new trade show in town, felt comparably desolate. Having made the move to Berlin from Cologne this season, Jam showcased moderate-price denim and urban wear brands such as Germany’s Madonna and MOD. While the industrial hall had the bright, spacious feel and karmic music of Premium, the atmosphere was missing and the 20-minute shuttle bus journey to suburban Schöneweide seemed to put people off.