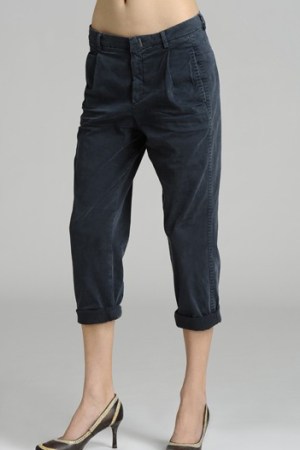 Rolled-up chinos, as well as suede, velvet, corduroy and cargo pants paired with plaid button-downs, heavy knits and fur-lined parkas for men and women were key trends at the three-day trade fair that ended Jan. 21 at Berlin’s Tempelhof Airport. The mood was upbeat, with manufacturers noting that retailers and consumers seem to be in a spending mood.

“Customers already own plenty of denim, and women have been wearing leggings for so long,” said Natasha Edginton of Monkee Genes, a U.K.-based label.

Known for its skinny colored jeans, Monkee Genes has added utility-inspired alternatives like khaki, olive and gray chinos to its offerings for fall.

Besides its stand at B&B, Guess Jeans was a first-timer on the Mercedes-Benz Fashion Week Berlin runway. The Back to the Roots collection presented denim jackets, shirts and overalls layered under rugged nondenim pieces, like hooded parkas and leopard coats, topped off with trapper hats and fur muffs.

Targeted at limited premium doors, the three additional groups carry a hefty price tag, retailing from 300 euros to 400 euros, or $408 to $544 at current exchange.

Manufacturers, however, suggested product was more important than price this season. Robert Hanson, president of the global Levi’s brand, said, “Consumers are going to choose a product if they love it. We focus on innovating our product, making sure the consumer can see the value in it.”

For fall, the brand is adding corduroy to its Curve ID range for women, which instead of concentrating on size, offers a variety of shapes.

“Some women really struggle to find a pair of jeans,” said Rosey Cortazzi, Levi’s European head of women’s.
Hanson added, “We don’t want to say, ‘Here is the trend,’ and even if this block wasn’t fit to your body, fit your body into it. We say, ‘You can have a slight, a demi or a bold curve, you can have a skinny leg opening to a flare or a boot cut.’ That’s our major innovation.”

While slimmer denim styles for men surfaced at Levi’s and True Religion, the women’s story for fall seems to be anything goes.

“The denim industry has been arrogant for a long time,” said Christian Brogi, head designer of Turkish label Cross, which has expanded its range of fits.

“It’s about what works on one’s body rather than what’s on trend,” said Tribeca’s new creative director Sam Frenzel, adding that while cords will never fully replace denim, they’re an addition. “I’m trying to turn Tribeca into a mosaic label that’s a mix of denim and fashion. For example, girls love a cropped jacket,” pointing to a quilted jeans jacket with gold studs.

Brigitte Seefelder, owner of Seefelder Mode, a premium store in Kempten, Germany, said, “Cropped tops are a trend for fall. But this means that there is a lot of emphasis on the body shape. So women shouldn’t try to fit into any style of jeans just because they’re of the minute, but rather pick the silhouette that works for their body.”

Cropped jackets also popped up at Gas and on the runway at G-Star, together with low-rise denims and chinos.

The young Stockholm-based casual fashion and skater brand WeSC showed a plethora of chinos at B&B and at the skater fair Bright, which was held for the second time in Berlin last week.

“Our roots are in the board sport, but for us there is a life after skateboarding, too, so that’s why we show at both fairs,” said Cora Arendt, brand manager of WeSC for Germany and Austria.

David Hirschhäuser, key account manager of Seven For All Mankind in Germany, noted that there were “definitely more requests for slim men’s jeans,” although for women, “all fits work. It’s very much a female consumer’s choice next season.”