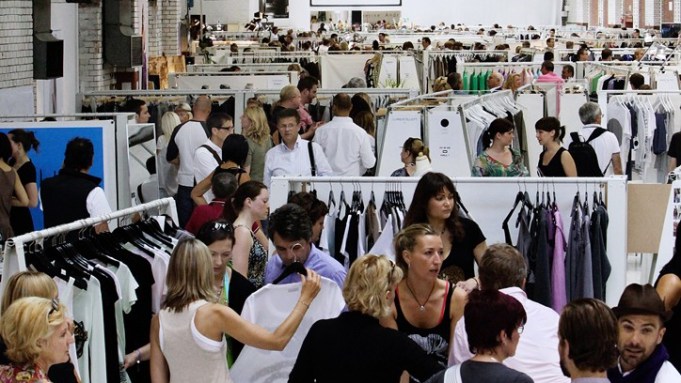 BERLIN — The return of mega streetwear fair Bread & Butter, coupled with the 14th edition of the Premium trade show, proved to be a boon for exhibitors as they saw an expanded pool of international buyers visiting their booths.

After four years in Barcelona, Bread & Butter enjoyed a strong homecoming at the historic Tempelhof Airport. The show that drew 550 brands for three days ended July 3, and although Bread & Butter declined to release total attendance figures, organizers said some 27,000 visitors turned up for the show’s first day. The 14th edition of Premium, which ran alongside Bread & Butter at Station Berlin, a former postal freight depot at Gleisdreieck, pulled in 31,672 visitors for its 900 exhibitors, the highest number of visitors to date.

While the frenzied atmosphere of Bread & Butter appealed to some, other buyers gravitated to the calmer feel of Premium. Regardless of their preference, exhibitors said the increased number of shows and events appeared to attract a higher proportion of buyers than in previous seasons.

“Bread & Butter’s like a big party,” said Patrick Roth, buyer for his namesake store in the southern German town of Landshut, which stocks denim from Hugo Boss to True Religion. “We also have to be entertained just like we have to entertain our customers. But what’s great about Berlin is that men’s and women’s are together so we don’t have to go to Florence, and it’s another big plus point that Bread & Butter and Premium are both here.”

“I found lots at Premium which will work for my stores,” Schulte said. “Bread & Butter was too young for my customers, and the whole atmosphere was too manic.”

Exhibitors said they saw strong buyer traffic from the show’s start, and the mood concerning streetwear market conditions was surprisingly positive, despite of the recession in Germany.

“Buyers are shifting budgets away from items that are too expensive or too hard to sell, and good value for money is more important than ever,” said Marino Edelmann, head of sales at the German label Drykorn, which prices itself just below most designer products and is still seeing steady sales increases.

Other labels believe the key to success in the difficult economic times is to focus on high-quality, longer-lasting pieces that consumers know will last more than a season.

“There’s almost an anticonsumerist feeling in the air,” said Grace Baker, a sales representative from the U.K. with Nudie Jeans. “People are prepared to spend money but only for pieces which promise longevity and have a heart and soul.”

In keeping with the recessionary spirit, the Swedish label is focusing on melancholy Fifties Scandinavian workwear, with faded shoulders, granddad collars and supersoft, double-faced checked shirts.

Nudie offered cuts varying from carrot-fit and very loose to supernarrow, giving buyers more options to offer consumers. Though ostensibly a men’s brand, Nudie’s slimmer fits are also bought by women, and the best-selling model for men is a classic slight boot-cut.

“People don’t want trend products in a recession,” said Rey Gautier, European creative director at Edwin, who believes heritage denim brands are the ones doing best. “We are sticking with what we know best, which is a high-quality, five-pocket classic cut.”

Leg seams are twisted to give a 3-D effect or a banana-shape silhouette. The brand’s women’s jeans moved away from skinny styles toward a carrot leg and superlow drop-crotch.

Premium spruced up its look, getting rid of much of the free-form clutter that previously characterized the gathering of up-market and niche men’s and women’s brands.

For first-time exhibitor Talbot Runhof, Premium was an opportunity to convince German retailers the line goes beyond eveningwear.

“Three customers said ‘Yes, you’re right,’ and made writing appointments for [CPD in] Düsseldorf,” said co-founder and co-owner Adrian Runhof. “All the relevant retailers are here because they find all the things that people wear, from jeans to evening dresses. And that’s why we’re here, too.”

Carl Tillessen, co-founder and designer of the Berlin-based contemporary collection Firma, said, “The mood is very good. We’re a bit surprised ourselves, but everyone’s upbeat, and the traffic has also been good. For us, it’s an ordering fair, and people are working and buying.”

Firma, known for cool tailoring, has developed washable tailored apparel for next season.