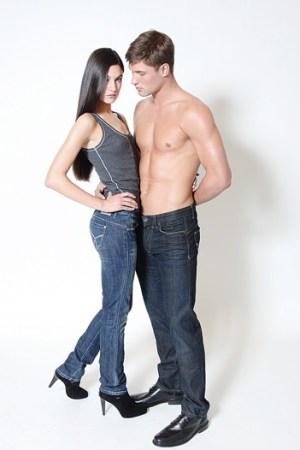 Calvin Klein is bringing its expertise in innerwear and denim together for its latest project.

The result is a fashion-forward sublabel featuring design elements that have been developed to accentuate fit and body shape. The women’s skinny-leg style features an inverse yoke, flattened side seams that have been shifted toward the front of the leg and a hidden elastic waistband that keeps the jeans fitted to the wearer’s back. For the men’s straight-leg style, extra layers of fabric were added to the fly in order to enhance the profile of the area. Both men’s and women’s styles also have a longer leg hem in the back to give a more tailored look when worn with shoes.

“We felt that the market needed a really new fit, a technological fit that enhanced the body,” said Carrigan. “Because we’ve had such success with our Body underwear, it was something we wanted to be known for. It was a synergy that I’m starting to work on between all our brands.”

Calvin’s management and design teams kept in mind that they were setting out to introduce a product line at a time when consumers are subjecting potential purchases to heightened levels of scrutiny and foot traffic at retail is soft. As a result, efforts were directed toward developing a dual-gender denim product that would have a distinct point of view and a global target. It took about eight months to meld the elements of Body and Calvin Klein Jeans into a focused product for launch, noted Janice Sullivan, president of Calvin Klein Jeans.

“We felt that we’d have one message and one great product, and we’ll put it out there and kick off from there,” said Sullivan. “I think the priority is to give people a reason to make that purchase. Whether it’s a value proposition or innovation, you’ve got to deliver more now.”

Carrigan anticipates expanding the collection in future seasons to include boot cuts, shorts and jackets.

“There’s an expansion of product that I can work on here if she reacts to this,” said Carrigan.

Tom Murry, chief executive officer and president of Calvin Klein, said the launch will be supported by a global marketing campaign. Details of the campaign have not been determined, but Murry said celebrity involvement was possible. Regardless, Murry said advertising would be in keeping with Calvin’s long-established DNA. Read: sexually charged and provocative.

“Hopefully, this will occur when we’re beginning to see a little bit of recovery at retail,” said Murry.

In the U.S., the women’s line will launch in 800 doors, while the men’s style will roll out in 150. The style will retail for $79.50 in the U.S. and slightly above the $100 mark abroad. In Europe and Asia, the collection will launch in some 300 freestanding Calvin Klein Jeans stores.

“We feel we’re picking up market share,” said Murry. “If the execution is carried out well, the strong get stronger in a weakening environment.”