At its Milan showroom, the company premiered its Jeans relaunch for fall. 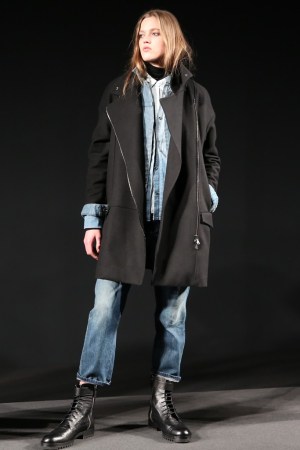 At its Milan showroom, Calvin Klein premiered its Jeans relaunch for fall, transforming it into a fuller, more elevated contemporary collection with a significant sportswear component alongside the denim.

Inspired by skateboard culture, Kevin Carrigan worked cool, casual silhouettes — some leaning slouchy — with a Nineties vibe. Suitably, the palette was mostly in black and gray. A shearling jacket, for example, was worn over a jacquard sweater, alpaca knit cardigan and leather shorts, while a felted jacket was shown with a stretch-leather turtleneck and washed-felt track pants. In keeping with the theme, layered gray slipdresses struck a subtle grunge note.

As for the underwear, the Perfectly Fit line evolved with mink-colored bras and underwear that merged microfiber with lace.