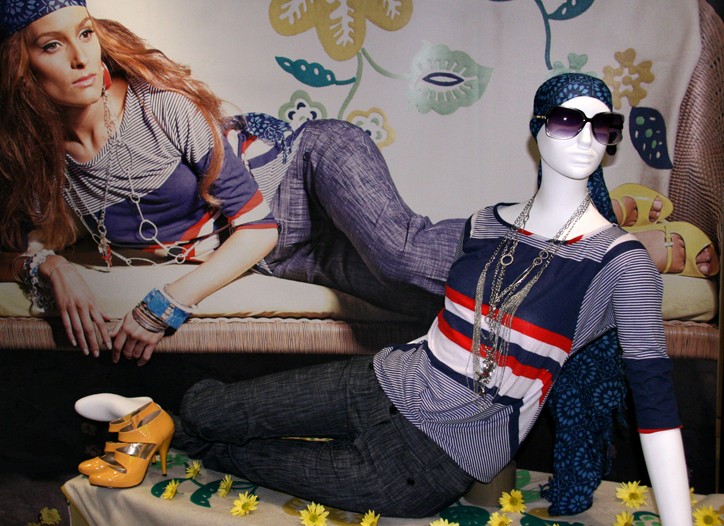 Charlotte Russe has some new merchandising ideas up its sleeve.

The beleaguered San Diego-based apparel retailer said last week it is considering a sale of the company, but as far as merchandising goes, the company is moving in a new direction.

The mall-based chain brought on Emilia Fabricant as president and chief merchandising officer about two months ago. Having spent 11 years with Barneys New York Co-Op, and more recently serving as president and chief merchandising officer of babystyle and chief executive officer of Cadeau Maternity, Fabricant said she is hoping to change the way people think of Charlotte Russe as more of a boutique shopping experience, rather than a typical junior apparel retailer. Starting in the next few weeks, the stores will shift gears and merchandise in a similar way to high-end specialty retailers, she said.

“Girls want to feel that high-end experience when they are shopping,” she said. “We are representing full trends and offering them everything to achieve the trend from the clothes to the accessories and the shoes.”

To help with the transition, Fabricant tapped Eric Daman, lead stylist from the TV series “Gossip Girl,” as a consulting creative director. Daman has helped merchandise the product and directed the new in-store marketing campaigns, which were shot to highlight key trends for spring — boho, romantic vintage and punk rocker. Fabricant said Daman has given the shots a higher-end look, and showcasing them in stores will give the windows and selling floor a new feeling.

“The idea is to make girls feel better about shopping at the mall, make them feel like they are in a store like Bendel’s or Barneys,” Daman said. “It’s the way girls want to dress, the way they want to shop.”

In addition to Daman, Fabricant signed on actress and former MTV VJ Susie Castillo as the Charlotte Russe brand ambassador, who said she regularly shops at the store and wears it on TV.

Fabricant said she hopes to increase the retailer’s customer base from 16- to 24-year-olds to 16- to 29-year-olds with the store’s new look.

“We are smarter about the way we shop for the product, and while our competitors are going bigger, we are staying focused and offering her better value,” she said.

Fabricant said the new People’s Liberation line, which is now exclusive to the store, will help to elevate the customer base. The collection, designed by Marcella Lindeberg (who also works on the William Rast and J. Lindeberg collections), serves as the store’s higher-end brand, with jeans retailing between $88 and $98. The People’s Liberation collection includes a full array of sportswear, from T-shirts and sweats to jackets. The store’s regular assortment ranges between $5 for a pair of flip-flops to $39.99 for a beaded dress. Jewelry is also priced in an approachable way at two for $8.

“We want her to come in here and walk out with the full look, and she should feel like she doesn’t have to spend a lot of money for great fashion,” Fabricant said.

The changes come as Charlotte Russe has slid into the red and suffered comparable-store sales declines.

In the first quarter ended Dec. 27, Charlotte Russe reported a net loss of $2.9 million, or 14 cents a diluted share, versus net income of $14 million, or 56 cents a share, in the year-ago period. Net sales for the period rose 1 percent to $240.7 million from $238.2 million. Excluding pretax charges related to its recent management transition of $2.2 million, the loss in the most recent quarter was 7 cents a share.

Comparable-store sales for the quarter fell 9.1 percent. The company said it opened eight stores during the period, and reported it had $55 million in cash and no long-term debt at the end of the quarter.

The chain operates 487 stores in the U.S. and Puerto Rico. There are 20 more store openings planned for 2009.