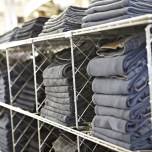 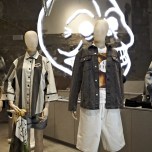 “We like the Marais. We definitely see our target age there,” Håkan Ström, chief executive officer of Cheap Monday, told WWD, pointing to “exciting neighbors” such as Surface to Air, American Apparel and A.P.C. The 2,150-square-foot store is the first freestanding unit for the Hennes & Mauritz AB-owned hip denim label, and its opening coincides with the brand’s 10th anniversary.

Cheap Monday already has 200 doors in France, including specialty stores and department stores, such as Printemps, and urban apparel megastore Citadium. “France sits in the top 10 of all our markets,” Ström said.

The brainchild of Swedish architect and design office Uglycute, the new location has a raw look with a rubber floor counterbalanced by a color palette of grays and beiges. It will carry the brand’s full assortment, including ready-to-wear and accessories. Denim represents about 55 percent of the brand’s business, while the rest of the line includes rtw and accessories, Ström said.

“Flagships are good to show the whole collection,” he noted.

In the last few months, Cheap Monday has opened two flagships in China — in Beijing and Shenyang — adding to its roster of flagships in London and Copenhagen. Limited-edition pieces with Paris-inspired motifs will be available exclusively in the new store, with key items including jeans, jean skirts and matching jackets with a Mona Lisa motif as an allover print.

Cheap Monday is heralding the store’s arrival with a social-media strategy including a guerrilla street campaign involving free jeans — with pockets containing maps leading to the store — hanging from trees. The brand is also collaborating with hip bars to offer free drinks to guests.