With Chinese consumers willing to overlook authenticity when shopping for big names in jeans, the market is flooded with fashion of uncertain origin. 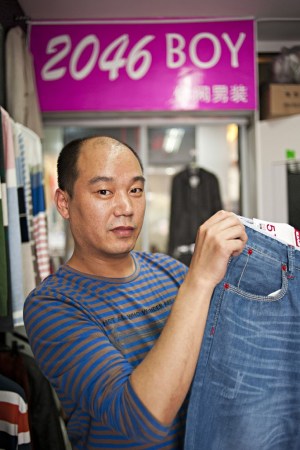 SHANGHAI — On the outskirts of this Chinese megacity near a massive shopping complex is a street lined with tiny stores selling cheap, yet ultrafashionable clothes.

One of the stores on the street is called 2046 Boy. The store opened a few months ago, and specializes in clothes for young men. Specifically, it specializes in blue jeans. The walls of the store are lined with super trendy styles — bleached, blasted, washed, ripped, boot-cut, relaxed, classic — from brands ranging from Levi’s and Dsquared2 to Ralph Lauren and Tommy Hilfiger.

They are all knockoffs or perhaps extra stock from factories that produce the real thing. Wang Xiao Dong, the owner of the shop, says he isn’t sure and that it doesn’t really matter anyway to his customers, who consist mainly of university students, migrant workers and blue collar professionals because, for them, “style matters more than brand” when it comes to buying denim.

“Most Chinese would love to pay a low price and get jeans with style,” Wang said. “Everybody has the right to look stylish. A lot of people who can’t afford real brands come to stores like this. It depends on people with different tastes.”

What is clear is that now, perhaps more than ever, Chinese have taste when it comes to the jeans they buy. Whereas less than a decade ago jeans were viewed as drab, utilitarian requisite work clothes for the proletariat, today the country’s exploding populations of fashionable urbanites are decked out in denim that looks unmistakably designer.

On the streets outside of Wang’s store are fashionistas from all walks of life and virtually all of them are wearing variations of jeans that are undeniably hip, hipper and hipster.

Zou Wen Liu, a 20-year-old migrant from Jiangxi Province who works as a cook, has on a pair of no-name boy-cut jeans with crushed denim that he purchased for 200 yuan, or about $30, at a small store in Shanghai. He says he bought them because he likes “the shape and the style.”

Lucca Li, who is from the city of Wenzhou and works in international trade in Shanghai, is wearing skinny jeans with a dark wash and leather detailing on the back. She also paid around 200 yuan for them in a hole-in-the wall shop.

Yan Fang, who works in real estate, is from Shanghai and is around 30, is wearing a pair of jeans with a baggy cut and a faded wash, which she has paired with a green velvet jacket and a Louis Vuitton purse. She said she is familiar with Diesel and owns a pair of Dolce & Gabbana jeans yet still places emphasis on look rather than label when she chooses to buy jeans.

In a country where consumers are arguably the most brand-conscious shoppers in the world, everyone from migrants to secretaries to the superrich buys or aspires to buy expensive labels from luxury brands, which serve as symbols to communicate social status, taste and wealth.

So far, this does not appear to be the case with denim.

“Business is very bad and getting worse,” according to Jin Liang, who works in O’blu, a store in Shanghai’s stylish Xintiandi shopping complex that sells a number of upscale labels, including Seven For All Mankind, Ed Hardy, J Brand and Siwy Denim. “Fake jeans are eating away at the market. There are a lot of jeans available online that are fake, which is one of the reasons why customers don’t come here, and people don’t know much about brands.”

A quick search for “denim” on Taobao, China’s biggest e-commerce platform, yields over 8 million results. As for vendors on the site that specialize in denim, there are more than 51,000. New Man Hill is one of the most popular Taobao stores for denim. The average price for a pair of the jeans it sells is 70 yuan, or about $11. A number of stores say they sell authentic Levi’s and Lee jeans with prices much lower than those sold in malls.

RELATED STORY: ChinaFile, To Taobao or Not to Taobao >>

Armani and Diesel are also available, though it’s unclear whether they are real or fake. However, according to sales figures available on Taobao stores selling the brands, only a couple of orders have been placed for such brands over the past month or so.

Even with an overall lack of brand awareness and unwillingness to fork over big bucks for expensive denim, foreign jeans labels are, with varying degrees of success, entering the Chinese market due to an overarching sentiment that the time is ripe to start marketing pricy pants to the nation’s consumers.

“Basically, Replay still has a large space in order to improve brand awareness,” said Matteo Sinigaglia, chief executive officer of Fashion Box SpA, the trademark owner of Replay, which has more than 40 stores on the Mainland and has been here for almost a decade. “At this moment, we are a niche brand in premium denim. In the premium segment, our brand awareness is very high, but in the general denim industry, definitely not.”

Sinigaglia said the many fake designer jeans flooding the market are a concern. However, what could soon be an even a greater concern are local brands, which are quickly becoming more sophisticated in the denim products they offer at prices much lower than their foreign competitors.

“There is no specific [Chinese brand] name yet,” he said, “but I believe sooner or later there will be a big brand name. Perhaps very soon.”

Robin Kosari, ceo of Hong Kong-based Golden Win Group Ltd., noted during his presentation at the WWD Denim Summit in April that Chinese consumers spent about $5 billion on jeans last year. However, while accounting for between 18 and 20 percent of worldwide denim units, that translated into just 9 to 10 percent of dollar or yuan value, implying an opportunity to trade up as the country’s young middle class grows.

A trip to a denim manufacturer outside of Shanghai makes it clear why many more foreign players may soon not be able to compete with domestic brands. The owner of the factory, which produces jeans for a number of mid- to high-level brands in Europe, requested that his name and the name of his factory not be used in this story.

He recently formed a team to showcase the high-quality work from his factory to Chinese labels that he said are already starting to make jeans with quality similar to brands like Diesel. These labels not only pay higher prices to manufacturers than foreign brands, but they are also able to sell the same quality jeans at far lower prices in the Chinese market, he said.

“They [Chinese brands] see our stuff, and they fall in love immediately,” he said. “What they have had in the past in their stores was s–t. Now their collections are going upwards a lot. Local brands are not stupid. They are stealing people [who manufacture for] Inditex or Diesel. They are upgrading themselves and trying to fight with those brands.

“For a supplier like us, we don’t care,” he added. “What we care is that we have enough orders to feed us and that the orders are profitable. If we can sell the same jeans with better margins than European brands, we will follow the domestic brands.”

Among the biggest domestic jeans brands is Lan Yan, which is produced by Lan Yan Group, one of the country’s biggest denim manufacturers. Black Peony Group, which also produces for a number of foreign denim labels, also has its own labels called Roador and ERQ.

Another challenge confronting foreign niche players in China is that there is simply nowhere to sell their products. Monobrand rather than multibrand stores remain the main option for retailers here, which is a problem for niche players accustomed to selling their jeans in high-end department stores.

“The multibrand business has just started in China,” said Nicole Chen, head of NC.Style, a Beijing-based company that helps niche brands enter the Chinese market. “You can see some quite interesting concept stores in Shanghai and Beijing or even Hangzhou, so it is starting but it is still too small. We cannot do much business.”

Chen has attempted to bring labels from Japan to China, including a denim brand called Caqu (pronounced sock-you). She says she hasn’t had much success so far.

“The name of the jeans is not really that important to consumers here yet,” she said. “Only the rich people, they probably go to Louis Vuitton or Dolce & Gabbana, but they do not really understand what the difference is between jeans brands and luxury brands’ jeans.”

Which is why stores like 2046 Boy may, for some time to come, be China’s biggest success story when it comes to selling denim. Wang, the owner of 2046 Boy, appears to be acutely aware that he is well positioned to sell to a consumer market that does not care where jeans come from as long as they are stylish and cheap.