Denim brand is introducing more fashion for its target audience of curvy women. 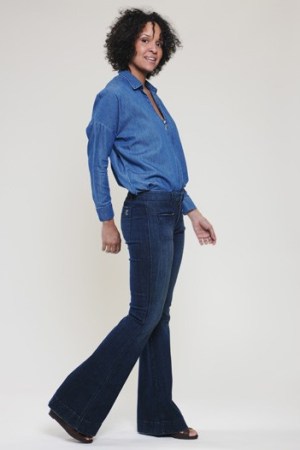 VERNON, Calif. — Cj by Cookie Johnson, the denim brand started by jeans veteran Michael Glasser and celebrity Cookie Johnson, has a new designer and is introducing more fashion for its target audience of curvy women.

Christina Brocato, who previously held the title of director of design and product development at both Paige Premium Denim and Habitual, joined Cj five months ago and has already diversified from dark rinsed jeans to $176 silk blouses, $226 denim zip-up tops with dolman sleeves and $338 ponte blazers for the fall season. Expanding beyond the eight denim styles Cj offered during its launch in spring 2009, Brocato is also adding novelty fashion with unconventional fabrics and silhouettes, such as cigarette pants cut from brushed twill that feels like moleskin. Other new textiles Brocato has added include laser-cut python prints, lace foil, tonal leopard spots and an array of colored denim in dark green, burgundy and purple.

“It’s about comfort and versatility,” Brocato said at Cj’s headquarters here, adding that her priorities were “respecting the curves of this woman [and] making sure that she feels sexy and sophisticated.”

The moves at Cj underscore the steady growth the two-year-old brand has achieved in an underserved market. Last year, it tallied about $14 million in sales of its denim bottoms retailing for $156 to $198 through national retailers and 500 specialty stores, including Nordstrom, Neiman Marcus, Julian Gold in San Antonio, and Zappos.com. This August, Cj will begin shipping basic bodies such as leggings, straight legs, boot cuts and flare jeans at a lower price point of $120 to $130.

Glasser, who made his mark in the denim industry as the co-founder of Seven For All Mankind and Citizens of Humanity, said he hired Brocato to replace Cj’s original designer, Joie Rucker, because he needed someone to focus solely on Cj. Rucker was working on Cj while also designing Rich & Skinny, another premium denim brand that Glasser co-founded.

At age 50, Johnson is the face of Cj, meeting customers in stores and relaying their demands and frustrations to the design team. After graduating from Michigan State University with a degree in retailing of clothing and textiles, she worked as a retail buyer until she married and started a family with basketball legend Earvin “Magic” Johnson.

Involved in all the fittings, Johnson worked with Brocato on techniques to enhance the appearance of a curvy woman, from making the tops longer and fuller to fit over the hips to adding seams to the front and back of the jeans to draw the eye up and down the body. Brocato said she also avoided marking big whiskers around the hips and distressing the back pockets. Every pair of pants has at least 20 percent of stretch in it.

“You can’t go as far as contemporary [styling], but you can go 60 to 70 percent of the way,” Glasser said. “It’s important to stay true to the customer.”