The category’s strong status was evidenced at the recent round of fashion weeks.

By Lorelei Marfil and Paulina Szmydke on October 23, 2014
View Slideshow 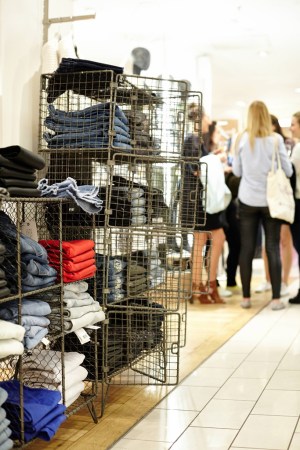 Upper-end retailers in Western Europe see the best days for the continent’s premium denim market still ahead, and that’s translating into opportunities for brands on both sides of the Atlantic as the U.S. struggles with a contracting market.

The category’s strong status was evidenced at the recent round of fashion weeks in Europe, where designers went to great lengths to give jeans and the fabric from which they’re cut a fresh look. Cue jodhpur pants at Fendi; wide-cut, low-slung jeans at Gucci, and double-breasted denim suits at Bottega Veneta, trumpeting a comeback of designer denim that retailers are cheering.

“Today, denim is not seen as only a casual piece, it is completely part of the daily wardrobe. This is so true in Paris where girls dress for the whole day without changing before they go out,” said Charlotte Tasset, general manager for women’s fashion at French department store Printemps.

What helps is that “luxury brands extend denim, which was previously not considered as a noble fabric, to all product categories including shirts and dresses,” helping to spread word of “a total denim look,” she explained.

Tasset noted that while denim has become “an essential piece of the outfit, women are really OK to invest in a pair of jeans: They want tailored denim with a high-quality fabric, comfort, perfect fit and wash.

Consequently, the offer under 100 euros [or about $127.30 at current exchange] tends to be disappointing regarding their expectations.”

According to Euromonitor, premium and superpremium jeans are poised to be the two fastest-growing denim categories between 2014 and 2018, up 16 percent and 15 percent in Western Europe, respectively.

The research organization estimates that the denim industry in the region as a whole will grow to $20.6 billion in 2018 from $18.4 billion this year. That’s in stark contrast to recent performance in the U.S., where jeans in general and premium and superpremium in particular have seen sales contract over the last two years after brisk earlier growth, and, for European retailers, it is good news.

Tasset said denim sales are driven by two different types of customers, not unlike handbags in the U.S.: the luxury and designer shopper, who already consumes the ready-to-wear of these brands, and the “fashionista” with a lower budget for whom the denim product is the first product she can afford, viewing that a piece in the coveted fabric goes for 325 euros, or about $414, at Saint Laurent, while a Stella McCartney item starts from 290 euros, or about $369.

“Denim is very much comparable to the sneaker in that sense,” said Averyl Oates, fashion commercial director at Galeries Lafayette, adding that the department store recently stocked up on Paige and Frame to satisfy growing demand.

But fast-fashion chains such as Zara are posing a serious challenge to the top layer, she warned, speaking of a polarization of the market.

“The DNA of Galeries Lafayette is that we offer a wide price range, [hoping to] democratize fashion, and so we also have Zara in our mix, which offers a pair of jeans for 30 euros [about $38.20], and this absolutely works for the mass,” Oates said. “On the other hand, premium is new on the scene and people all want newness, so it’s doing well, but given the economic environment, we see that the French have a slight resistance paying over 200 euros [or about $254.60] for a pair of jeans. You have to look at volume here. Is it niche or is it mass?”

According to Walter Manfroi, owner of Blue Men, which handles the distribution of Japanese denim in Europe, there is growth on both sides of the spectrum.

“Chain players such as H&M and Zara, who are investing quite heavily in higher-quality and interesting washes, are taking the bottom market with prices up to 60 euros,” or about $76.40, he said. “There is significant activity at the top, with prices up to 300 euros [or $382], reflecting brands’ efforts to move up the ladder to avoid being eaten from below.”

The middle segment offering products between 70 and 99 euros, or $89 to $126, shows hardly any sign of growth.

“This is where the majority of big players are, so it’s really busy and overcrowded,” said Manfroi, adding that it is crucial in this category to make “the perfect garment, with the perfect marketing. A single error on quality or style and the bottom will overtake.

Quality Japanese denim, which often costs three times as much as the least expensive denim, sees its sales in Europe growing at double-digit rates, according to the executive.

“People buy bottom goods to play, maybe once a month not minding to spend 30, 40 euros [$38.20 to $51], but that doesn’t keep them from spending serious money at least once or twice a year for something really well-made and top-quality such as Japanese selvage,” he said.

However, much like in European Union politics, where a so-called “two-speed Europe” has become reality, the denim industry, too, is developing at a different pace, depending on which side of the English Channel one is shopping.

“Premium denim is on the rise in Europe, but it happens to be stronger in London than it is in Paris, which is in part a reflection of the economic environment there,” said Craig Johnson, president of Customer Growth Partners in New Canaan, Conn., who explored the dynamics of the market during a recent visit to Europe. “Foreign buyers, be it tourists or part-time residents, contribute most to the luxury market, and Paris depends a lot on Chinese buyers who have very little interest in the premium denim category, leaving the sector mostly to domestic buyers, while London boasts a huge Middle Eastern and Russian presence, and these are both heavy premium denim wearers.”

“As a whole, the premium denim market is growing faster in Europe than in the U.S.,” Johnson said, singling out J Brand and AG Adriano Goldschmied as “the two hottest U.S. brands” on the continent, according to his retail research.

“Denim has always been an important part of our women’s wear business,” said Olivia Richardson, head of women’s wear fashion buying at London-based Harvey Nichols. “But it is performing exceptionally well at the moment. The ready-to-wear collections from denim brands have taken longer to embed in the European market than the U.S., but we are now seeing sales in this area really taking off, adding substantial additional sales and renewing interest in key denim brands,” pointing to J brand and Paige as bestsellers.

Lydia King, buying manager for contemporary and denim at London’s Selfridges, said, “The Denim Studios in London, Manchester and Birmingham are all consistent strong performers both in terms of sales and footfall. The Online Denim Studio experience is also a strong sales driver for us as women definitely feel more comfortable shopping denim online than in the past,” she said, citing J Brand, Paige Denim, Hudson and Frame among top sellers.

Among the best-performing innovations, King cites Paige’s Transcend line, featuring a soft fabric that emphasizes shape retention, and J Brand’s Photo Ready denim, which lifts and contours the body to give a slimming effect.

“We launched this season a number of distressed styles within this fabric, which have been our top sellers within the room,” she said.

Retailer initiatives to boost denim sales include pop-ups, brand collaborations, exclusive denim style offerings and customer events. “Our customers have high expectations and like to interact with the space, the product and the people behind the brands,” said King, naming a collaboration with London designer Ashley Williams, who created exclusive denim pieces to celebrate the first birthday of the store’s Denim Studio.

Richardson said at Harvey Nichols many brands are boasting double-digit increases in comparison to previous years thanks to luxe fabrics engineered to pull the body in and not “give” as it moves.

“Distressed denim remains the most important trend; ripped jeans, blown-open knees and patchwork are all key styles,” she said. “Next season we’ve seen a real Seventies influence coming through, so expect to see boot cuts and flares making a comeback.” Add also AG’s Contour 360 Jean, which utilizes a cutting-edge fabric “that has the flexibility of yoga pants,” said Richardson.

Harvey Nichols is hosting a two-week pop-up for Paige Denim through Oct. 29 and the retailer will host an exclusive denim shopping party in its Knightsbridge unit in conjunction with Elle magazine featuring Citizens of Humanity, J Brand, DL 1961 and Rails.

Tasset noted: “For the future, we should count on the denim premium brands which are arriving in France, such as J Brand, Hudson, Mother, AG Adriano Goldschmied, Frame. They don’t have the notoriety they have in U.S. or U.K., so today they have to capitalize on the quality they offer vis-à-vis brands that are well established in France such as Armani Jeans, Levi’s, Diesel. The main short-term goal is visibility and communication. We have to keep an eye on them because once they become well-known by the public, they will have a huge potential.”