The show is cementing its place as the preferred venue for unveiling new lines in fashion denim. 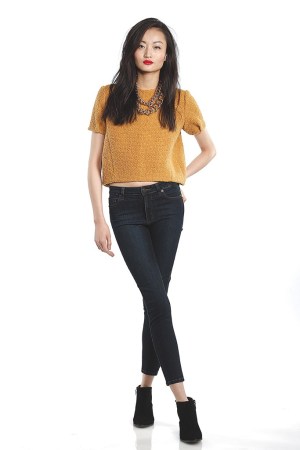 LOS ANGELES — Established jeans brands — including J Brand and Seven For All Mankind — have often chosen to display their latest women’s collections at Coterie rather than more denim-centric trade shows. At the upcoming edition, Koral Los Angeles, Velvet by Graham & Spencer and Mia & Moss are following their example.

Koral Los Angeles is prepping the debut of a new sportswear category with the former creative director of Donna Karan, while knits purveyor Velvet by Graham & Spencer is expanding into denim and start-up Mia & Moss is making a play on price.

Created two years ago, Koral Los Angeles is ready to evolve from a jeansmaker to a full fashion brand. Under the consultancy of Bonnie Young, a New York designer who started a namesake women’s and children’s label after logging 16 years as the creative director of Donna Karan, it’s finessing a sportswear collection that borrows from men’s wear, using denim as a foundation for tailored pieces accentuated with silk, fur, rayon jersey and crisp cotton.

For instance, a denim anorak tinted dark blue is a pliable protectant against nature’s chills when coupled with a silk lining and raccoon fur collar. Testing the coat this winter, Young has attracted potential customers with sophisticated tastes, like art curator Yvonne Force Villareal.

“It really upped the level of just denim,” Young said.

Peter Koral, the brand’s namesake founder, said the denim industry is going through a cycle. He would know as the cofounder of Seven For All Mankind, which VF Corp. acquired for $775 million in 2007. With his son David, Koral is navigating the Vernon, Calif.-based company through a fragmented market where retailers are consolidating the lines they stock.

“Everybody’s making out to include more than denim, including us,” he said.

David added, “Fashion is changing in front of our eyes. It’s important that we adapt.”

The introduction of the 40-plus pieces for fall is expected to boost sales to $15 million this year from $10 million last year. Europe is a prime target. Koral has 345 accounts there — compared with 110 in the U.S. — and sales through European retailers including Mytheresa.com, Selfridges, Harrods and Le Bon Marché are up 58 percent from a year ago.

Plus, Young, with her decade-long stint living in Milan, possesses a European sensibility that is conveyed in her neutral-tinted designs for Koral. For example, a $95 basic T-shirt is anything but in gray cotton and rayon stitched with a French seam and cut with a high-low hem. A $491 tailored blazer incorporating indigo and black denim is roughened with frayed edges on the lapel and back seam. There is also a drop-crotch denim trouser and oversize white cotton shirt with mandarin collar, retailing for $322 each.

“A lot of people treat denim like it’s more street and very casual,” Young said. “The collection I did is dressed up and dressed down.”

When it opened its first two stores in Los Angeles last year, Velvet by Graham & Spencer discovered that customers hankered to buy the jeans styled with its shirts on the mannequins. The problem was, the jeans were made by other brands that the store bought solely for display. Still, the Culver City, Calif.-based company recognized a business opportunity.

For fall, the 17-year-old brand is introducing jeans made in Los Angeles from U.S.-produced fabric. Retailing for $148 to $168, the inaugural collection includes a trio of bodies — skinny, boyfriend and tuxedo — in 15 washes that span the spectrum from stonewashed gray to jet black to dark blue faded with whiskers.

In addition to its own stores in Los Angeles’ Venice and Brentwood neighborhoods and its Web site, Velvet plans to offer the jeans to U.S. retailers such as Anthropologie, Saks Fifth Avenue and Shopbop.com, as well as to wholesalers in Europe, Japan, Canada, Australia and New Zealand. It’s already received a buying commitment from Bloomingdale’s. The first-year projection is to sell more than 20,000 units to wholesale accounts, helping the company to achieve its goal of increasing annual sales by at least 15 percent this year.

“It’s very clean, very simple, with no fancy back pockets just because we want the longevity [of the wear],” said codesigner Jenny Graham, adding that the exterior branding is limited to embossing of the brand name on the waist button and one rivet on the front left pocket.

Velvet’s first experimentation with denim came in the current spring season, when it produced a vintage-inspired jeans jacket for the sophomore collaboration it did with model Lily Aldridge, who took eight pairs of jeans home with her.

“We don’t want to compete with other denim companies to do everything,” said codesigner Toni Spencer, who started her career at denim company L.E.I. “We want to keep it true to our customer.”

Nonetheless, Velvet is growing beyond the niche of knit tops. Roomy totes and zippered clutches fashioned out of colorfully dyed leather will hit its retail network this spring. Plus, it needs more wares to stock its branded stores.

Henry Hirschowitz, the company’s chief executive officer, said, “We’re looking at [opening] two to three stores in the next 12 months.”

For Mia & Moss, the sweet spot at retail is $99. Making its premiere at Coterie only a week after delivering the first shipments from its initial collection to 60 specialty stores, the Los Angeles label hopes to attract customers who want to combine value with luxury. Its answer to that formula is a cashmerelike fabric that is essentially rayon-wrapped cotton woven in its own textile mill in China. By handling everything from fabric production to cut-and-sew operations, it can control costs and keep the wholesale price under $50.

For fall, Mia & Moss nearly doubled the number of styles to 30 and introduced outerwear. Denim moto jackets and blazers complement the straight, skinny and slim boot cuts that integrate moto details and acid washes. For the dark washes, it locked in a color fastener so that the indigo won’t rub off.

Though new to the branded denim sector, ceo Carlo Ghailian started in the private-label sector 20 years ago. Between producing clothes bearing tags for NYDJ, Torrid, Wet Seal, Charlotte Russe, Bon Ton and Macy’s, and operating the textile mill, his company, E. 8th Group, generates $60 million in annual revenue. In the first year of selling Mia & Moss, he hopes to reach $1 million in sales.