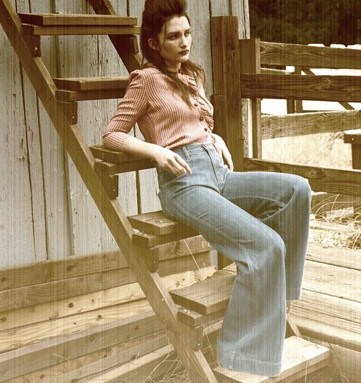 A year after Current/Elliott helped ignite the distressed-denim frenzy, designers Emily Current and Meritt Elliott are working the counterpoint.

For fall, the duo is introducing Deadstock, a new denim collection under the Current/Elliott label, inspired by vintage deadstock jeans from the Fifties, Sixties and Seventies. Unlike the core collection, which is designed to look well-worn, Deadstock’s aesthetic has a cleaned-up, preserved feel.

“Meritt and I are obsessed with flea markets,” said Current of the new line, which includes men’s and women’s styles. “We would always see people hovering over these vintage jeans that were unworn, with the tags still on, and everyone was collecting them. This is sort of our homage to the whole collectors’ thing.”

Deadstock will hit 80 stores, including Neiman Marcus, in July. The women’s collection consists of 10 styles, including skinny, wide-legged and, of course, Current/Elliott’s ubersuccessful boyfriend versions, while the men’s range has six styles. All are made from Japanese denim and are available in three washes: One Wash (dark), Indigo (classic) and the faded True Blue. While Deadstock doesn’t have the same look as the main collection, it has the same supersoft feel.

“[Real] deadstock is a little stiff and sometimes not as flattering on the body,” said Elliott. “We cheated a bit.”

Both lines sit well within the premium range, but Deadstock, with wholesale prices ranging from $58 for a vest to $90 for a shrunken jean jacket, comes in slightly lower than the main collection ($72 to $226, wholesale). Asked if the reduced price was a reaction to the economy, Elliott said it was more of a happy coincidence.

“This collection wasn’t our idea of doing a lower-priced collection. Maybe that’s something we would consider in the future,” she said. “By nature, Deadstock is less expensive because the washes aren’t as difficult.”

Even if Deadstock’s more approachable prices weren’t planned, they certainly tie into the new economic reality and could be read as a reflection of Current and Elliott’s stylistic instincts, which have been dead-on thus far. Since launching in July under chief executive officer and creative director Serge Azria, the Los Angeles-based label has become a retail and editorial favorite, thanks to the designers’ fresh take on denim. The company declined to disclose figures but reports that sales have doubled and are expected to double again in the next year. The collection is carried in more than 500 doors internationally.

“I think that before we launched, denim was — I hate to use the word ‘stale’ — it was going in a direction that was rhinestoned and glittery, and we sort of woke up the whole vintage vibe,” said Current. “It wasn’t our expectation. We just wanted to do something we loved.” And now they’re feeling the love for Deadstock’s streamlined look.

“Meritt and I were wearing boyfriend jeans every single day, and we kept saying, ‘I want to be a rockabilly. I want to wear dark jeans with saddle shoes,’ ” said Current. “We don’t have that, and we need that, so that was how the idea started.”