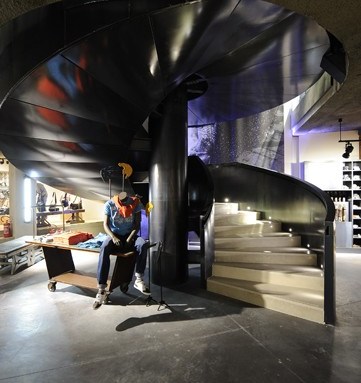 MILAN — Diesel will present its fall men’s wear collection next week at the company’s new Milan Planet store, its biggest retail outpost in the world.

The event, which marks the store’s official opening, will be held Tuesday evening during Milan Men’s Fashion Week. The store opened for business in November. The collection and the event will revolve around a central theme: the weather. Guests will walk through four environments, including rainy, foggy, rainbow clear and sunny.

“This is a fantastic store, and its large size allows us to present the collection in an incredible way, respecting the theme of the season,” said Diesel founder Renzo Rosso.

Informally cut blazers, striped or check shirts and military touches are some of the key elements of the collection.

The store, which spans more than three floors and covers more than 16,200 square feet, is located in Milan’s central piazza San Babila, between the city’s cathedral and the tip of Corso Vittorio Emanuele, one of the city’s busiest shopping streets.

“I’m proud I waited for the right location, and I’m very pleased with business here so far,” said Rosso, who expects the store to have annual sales of 10 million euros, or $13.2 million at current exchange.

Five hundred pairs of jeans were sold in the first five days the store was open.

“The fact that I didn’t have such a store in Milan, Italy’s fashion capital, was always distressing to me,” said Rosso, who declined to provide an investment figure.

This is the third Planet store worldwide, following units on the Ginza in Tokyo and Queens Road in Hong Kong last year. The fourth Diesel Planet store is slated to open on New York’s Fifth Avenue next month during New York Fashion Week.

Rosso underscored the technical elements incorporated into the store’s design. In addition to a digital mirror that offers a 360-degree vision of a customer’s body, sales clerks will carry handheld checkout devices so shoppers will be able to pay from anywhere in the store. Wi-Fi installations will allow customers to shop online, said Rosso.

“The store is big, but only about 30 percent of our production makes it inside, and sometimes customers can’t find the right size or color,” he said. “This will allow them to order what they want.”

The store is also wired with Bluetooth technology. Customers chatting on their cell phones when they enter the store will have their conversations interrupted with a message from Diesel welcoming them inside. Diesel is experimenting with an “olfactory attraction” concept, as well. A computerized system will release a range of scents and fragrances in specific areas of the store, depending on the weather and the season.

An enormous spiral staircase built from hand-brazed metal plates is an eye-catcher within the store, which carries Diesel’s complete product range, from men’s and women’s collections to accessories and the Kid division. Five thousand denim jeans are on display on the Denim Wall, with more than 150 styles and 150 washes. An added service is an in-house tailor.�