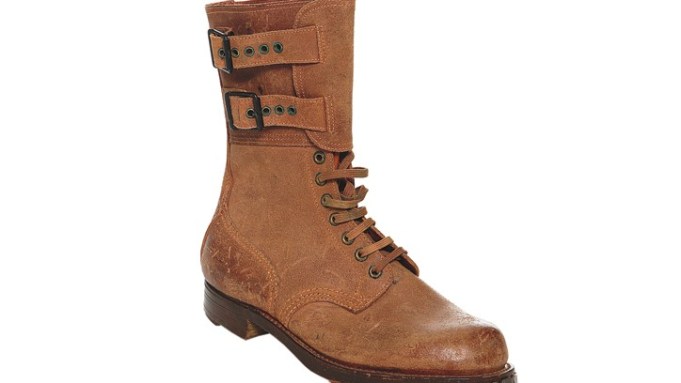 PARIS — This fall, die-hard denim fans could start their day slipping out of their Levi’s moccasins and into their April 77 boots, donning Seven For All Mankind shades and a Notify bag, adding bling with an Acne ring, splashing on a Kaporal 5 scent and popping on a Le Temps de Cerises helmet before heading for lunch at the Diesel restaurant in Milan.

The global financial crisis hasn’t slowed denim labels’ march toward lifestyle brand status, as they seek to enter new retail channels and offer a wider price range via new categories. For the brands, it’s not only a question of image but also of survival, according to Gilles Bellaloum, chief executive officer of Parisian multibrand store Le 66.

“Everyone is looking for additional niches to boost business,” Bellaloum said.

“Our shoes will be sold first of all in footwear stores, then to our network of customers and also in our own boutiques,” said Gil Richardière, co-founder of Le Temps de Cerises, which will also introduce leather bags, watches, jewelry and helmets this fall.

After unsuccessful forays into footwear and leather goods, the Marseilles-based brand decided to take the licensing route for those five new categories this time around.

“Professionals bring their expertise and a distribution network with them,” Richardière said.

Expanding into new product comes hand-in-hand with brands’ continued investments toward developing their own stores. With 30 stores by the end of July, Le Temps des Cerises’ boutique network is big enough to support the launch of new lines, Richardière said. The label will open four boutiques by July, including a test shop in St. Tropez for Little Cerise, its new children’s wear collection, and next year will begin developing franchises.

Others expansions include Kaporal 5, which will open five or six units in France this year to bring its store count to 11. Seven For All Mankind will open its first European store in Paris, bringing its signature chain to 11. Acne has outlets slated for Amsterdam, Sydney and Melbourne this year.

“From the minute denim brands decide to open boutiques, they need to expand their offer,” said Sarah Lerfel, buying director at Colette.

But that can discourage multi-brand clients like Colette, which has trimmed its denim lineup to just one label a season.

Even brands without their own stores are joining the rush to new categories.

“Accessories have a great way of really completing a collection and emphasizing certain design directions,” said Rasmus Bak, head of sales at Danish label Won Hundred, which has postponed plans for its debut Copenhagen store due to the financial crisis but is forging ahead with bags for summer 2010. The label is also expanding its footwear offerings for fall to include suede wedges with zippers and snakeskin heels to its fall lineup.

There’s a limit to how far denim brands can extend themselves, however,  according to Lerfel.

“It’s important you can associate a brand with a certain type of product,” she said. “If products aren’t made perfectly, there’s no point.”

Brand extensions that have a certain logic, such as Current Elliot’s denim skirts, jackets and dresses, win Lerfel’s approval, as does April 77, which has built a ready-to-wear collection coherent with its rock ’n’ roll denim styles. But those are exceptions to the rule, she said.

“When jeans brands launch ready-to-wear, that interests us far less than when it is their core expertise — denim,” she said. “When a fashion brand  collaborates with a denim label, like Hussein Chalayan with J Brand, which we’ll have as a [sneak preview] in July, that interests us.”

Brands dispute the theory that product extensions could ultimately dilute their reputations as denim specialists.

“Denim is a totally separate expertise,” said Le Temps des Cerises’ Richardière. “Lots of brands offer one or two pairs of jeans for their customer, but they’re not people who know how to make denim. In denim, you need a story; you need the culture.”

Laurent Emsellem, ceo of Kaporal 5, which holds 12 licenses for everything from watches to eyewear and is negotiating a deal for fragrance, said, “As a general rule, our licensed products always reference denim in some way.”

The brand has refused potential licensees, such as for household linen, if it doesn’t deem the category to be particularly relevant to the brand. Denim now generates just 33 percent of its sales.
Likewise, April 77 develops its accessories, which included a pair of nonleather cowboy boots with British brand YMC this summer, as a complement to particular denim styles. Later this year, the label will introduce socks, offering a wild array of patterns and colors to be worn under rolled-up raw selvedge jeans.

The downturn’s silver lining is the potential for out-of-the-box collaborations that might not previously have made the drawing board.

Take Notify’s upcoming collaboration with military footwear manufacturer Marbot. A few months ago, owner and designer Maurice Ohayon spotted a news item reporting that, after more than a century outfitting the French territorial army (including through two world wars, where wood was used instead of leather in tough times), Marbot risked going out of business because the army (its biggest customer) was switching to a cheaper supplier in Tunisia. With the huge investments into machinery needed to keep up with the technical requirements of the army, Marbot had never developed a business with civilian clients.

It was a situation that struck Ohayon with a certain irony.

“In the middle of the crisis, when [President] Sarkozy had been advocating supporting French or at least European businesses, the first to fall into the trap is the French state,” he said.

Ohayon contacted the firm and a collection of seven styles for men and women, inspired by the heavy-duty leather boots from the early Fifties, will be introduced for fall-winter 2010.

“Offering a total look is absolutely not want we want,” said Ohayon, noting that Notify’s first foray outside denim — tailored jackets, suits and shirts — was in keeping to his original profession as a tailor.

“The big difference when you go outside your core business is competence,” he continued. “A brand can say, ‘We can do everything,’ but if it’s the same teams that have to design dresses and table napkins, say, it doesn’t work.”

Notify’s strategy is to collaborate with specialists. Forthcoming encounters include footwear designer Bruno Frisoni on a feminine collection of shoes using denim due for summer 2010 and with architect Ron Arad on a high-tech leather bag featuring liquid crystal technology to make it transparent at the flick of a switch, due out this fall. Also out this fall is a second vintage style jewelry collection by Brazilian designer Roberto Costa.