Denim companies are taking advantage of attractive real estate opportunities to open their own stores. 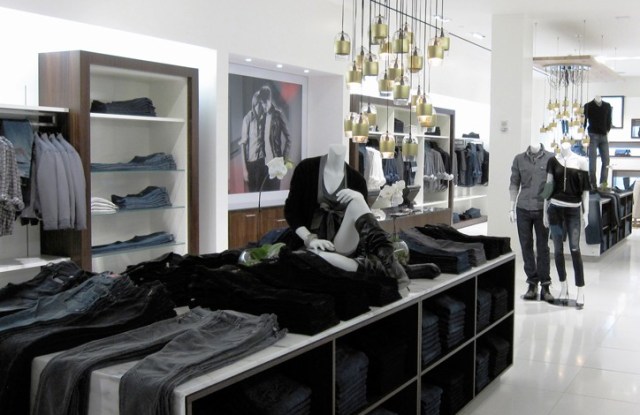 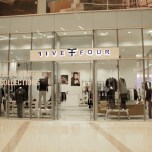 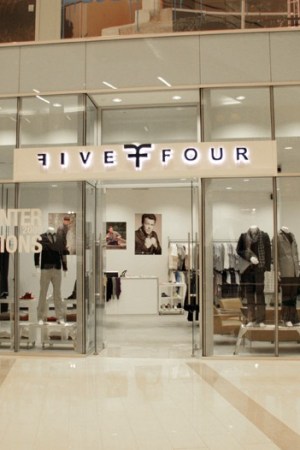 With denim one of the best-performing categories in the apparel sector during the recession, companies are taking advantage of attractive real estate opportunities to open their own stores.

The stores provide a stable revenue stream at a time when department stores and independent boutiques are facing credit issues and sometimes paying vendors late.

Last month, Los Angeles-based denim brand Five Four opened its first signature store in nearby Westfield Culver City shopping center. The company rings up about $8 million in sales annually, but Andres Izquieta, who cofounded the label with a University of Southern California classmate in 2002, felt the timing was right to invest in a store.

“We’re spending time and money on something that may or may not work,” Izquieta said. “Some people thought we were crazy going into retail in this economy. But I like the retail model — you get paid immediately and there are no chargebacks. I’ve learned more in the past month by opening this store than I did in my previous seven years in business.”

The company has done well enough with its first store that its slated to open a second unit at the Westfield Century City mall in Los Angeles the day after Thanksgiving.

Five Four is among many jeans brands that have invested in opening their own stores during the current economic downturn.

“It’s about being able to control your own destiny,” said Izquieta.

True Religion has opened 32 stores since the onset of the financial crisis in September 2008, bringing its store count to 68 in the U.S. and three outlets in Japan.

“The retail climate has not changed our store growth strategy because our stores have performed very well in this environment,” said Jeff Lubell, chairman and chief executive officer of True Religion Apparel Inc.

True Religion stores generate about $1,200 in sales per square foot annually. The company measures retail performance in terms of operating profits as a percentage of net sales, and Lubell said its stores are exceeding the company target of 30 percent in that metric.

The company plans to open another 20 to 25 stores in 2010. Currently, 85 percent of True Religion units are in malls, versus 15 percent in street locations.

“True Religion is undergoing a transformation from a premium wholesale denim supplier to a vertical retail lifestyle brand,” wrote analyst Todd Slater of Lazard Capital Markets in a Nov. 4 research note. “We believe it can more than double its footprint [of retail stores] domestically and also has white space internationally.”

At Seven For All Mankind, co-tenancies are important factors in choosing store locations.

“We’re looking for other brands like Michael Kors and Intermix and Juicy Couture to be near,” said Aaron Battista, the company’s vice president of retail. “That’s where the luxury contemporary shopper is.”

Seven For All Mankind has tweaked the look of its stores in the past year, making them warmer and more inviting, while moving away from the sleek and polished look of its earlier shops.

“We’re making them a little more residential, with natural materials and matte finishes,” said Battista. “Luxury is being redefined all over these days and we wanted to take the formality out of the stores, and give them more of a California feel.”

The stores have also been bringing in some VF Corp. sibling brands to “add some fun and pop,” said Battista. Converse by John Varvatos footwear is in the stores now and Varvatos’ Star USA label will be added in the spring. The denim brand is also testing some Splendid and Ella Moss product in its Malibu, Calif., unit.

The Seven For All Mankind retail expansion is part of VF Corp.’s company-wide strategy to emphasize owned-retail as a key component of growth. But Battista acknowledged that’s it’s been a big challenge navigating the economy while opening new stores.

“This is the toughest I’ve seen retail in my career,” he said. “It’s been a year of learning.”

At Paige Premium Denim, president and ceo Michael Geller echoed those sentiments. The company opened a Las Vegas store in The Venetian hotel in October 2008, just as the financial crisis was unfolding.

“It was like, ‘Here are the keys to the store and here’s the cliff to jump off of,’” remembered Geller.

PPD operates three stores and the Las Vegas unit has been hit the hardest by the economic downturn, due to the steep falloff in tourism there. The New York store in the Meatpacking District suffered last year but has bounced back this year, said Geller, while the Los Angeles unit, the oldest, has been steady over the past four years it’s been open.

As a small, privately owned company, PPD is focused on opening stores that will produce profitable sales, rather than serve as loss-leader marketing vehicles for the brand.

“We’re not opening glitzy showcases,” said Geller. “We’re opening very functional and easy-to-shop denim stores. So it’s not a huge investment for us to open a store. We’re not building stores with our egos.”

Geller said for a brand like PPD, he’s found streetscape stores are preferable to mall stores at this point.

“When you go into a mall they often have a lot of requirements about how the store has to look, which can be expensive,” he said. “And when your competitors in a mall go on sale, you’re forced to follow suit. With a street store, you have a lot more flexibility.”

One of the most important roles for PPD’s stores is serving as a laboratory to test new product. For example, the men’s business has been performing well in PPD’s stores, accounting for 18 to 20 percent of sales, versus just six to seven percent in wholesale accounts.

In contrast to PPD’s strategy, Rock & Republic’s glitzy new Los Angeles store does serve as an expensive marketing vehicle and brand showcase. The 3,800-square-foot flagship on Robertson Boulevard bowed in May, after over a year of construction delays.

“It was like labor,” said company president Andrea Bernholtz.

She said it was too early to tell if the store was turning a profit, but emphasized it has burnished the brand in the minds of consumers and retail partners.

“This is our signature space. It’s the finest of everything,” she said. “When you amortize it out, it wouldn’t make the most sense to roll out a lot of them, but we can use this as a signature and pull certain elements out to other stores.”

Bernholtz said the store had garnered attention from potential franchise partners in Dubai, the U.K. and Asia who were interested in the Rock & Republic retail concept for those markets.

The Los Angeles store joined a Rock & Republic unit that opened in the Wynn Encore hotel in Las Vegas last December, which Bernholtz said already hit its sales goals for the year three months ago.

However, earlier this year the company scrapped plans to open a two-level, 2,800-square-foot flagship at 102 Greene Street in Manhattan, which was scheduled to open this past spring.

“We’re not rushing out to open more stores right now,” he said. “But we would like to open additional units down the road in major markets.”

The brand’s retail sales have picked up steadily since April, said Rosenfeld, and the company is “cautiously optimistic” heading into 2010.

Among all denim brands, Diesel opened the most expensive and ambitious store this year, a three-floor, 20,000-square-foot flagship on New York’s Fifth Avenue. In addition, the company opened a third Miami unit and relocated two stores in San Francisco and Georgetown in Washington. Diesel operates 46 stores, including Diesel, Diesel Kid, 55 DSL and outlet units.

“We could have decided not to open those stores in the current economy, but they fit our criteria for where we see opportunity for long-term growth,” said Steve Birkhold, the ceo of Diesel USA, who is leaving at the end of this year to take the ceo post at Lacoste USA. “We are positioning ourselves for 2010 and 2011 and beyond. If you know [Diesel founder and owner Renzo Rosso], he’s an aggressive guy and to his credit he could have taken a hiatus from expansion, but hasn’t.”

Denim sales were down in the single digits this year at Diesel, while fashion apparel was down double digits, said Birkhold. These declines were partly offset by strength in the footwear, accessories and underwear businesses, which offer a lower price point entry to the Diesel assortment. In response, the company has shifted its merchandise presentations and layouts within stores to put those categories in higher-traffic areas.

“With our own stores, we can be nimble in making adjustments. We can implement changes by Wednesday in response to trends we see on a Monday,” said Birkhold, who also said the company has cut payroll in stores in response to the difficult retail climate. “The reality is the consumer is in a little bit more of a self-service environment.”

At the Five Four mall store in Culver City, Izquieta has been a hands-on ceo at his new venture.

“I was in the store until 2:30 in the morning last night making changes to our spring collection,” he said. “Now we get to merchandise everything ourselves and I’m seeing things that bombed at wholesale are selling very well in our own store. In a way, the recession has actually been a blessing in disguise for us.”