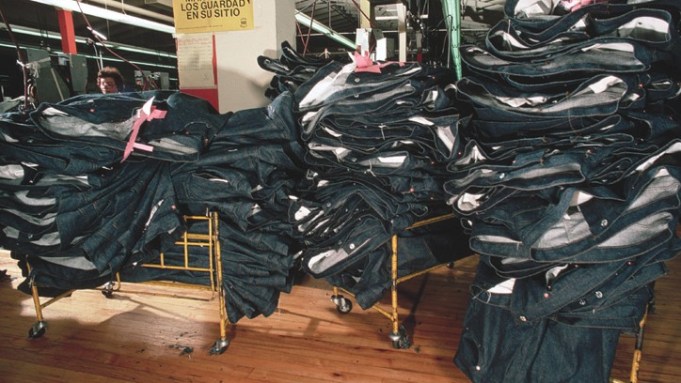 In a recession that has rattled the foundations of the apparel and retail industries, the case for denim has never been stronger.

At this time a year ago, brands and retailers were seeing threats to consumer spending on a number of fronts. As the presidential election entered the homestretch, foreclosure rates continued to rise and the national average for a gallon of gas was speeding toward $4. Consumer spending was already being constrained, but no one foresaw the string of global economic collapse, rising unemployment and retail bankruptcies to follow. Despite this, consumers have kept spending on denim. The value proposition for those who follow and work in the industry is simple: jeans can be worn in a variety of social situations and have one of the longest life spans of any apparel item.

Data from market research firm The NPD Group shows that the women’s denim industry achieved what few other apparel segments could over the last year — it grew. U.S. women’s jeans sales in the channels tracked by NPD totaled $8.03 billion for the 12 months through March 31, a 4.6 percent increase over the $7.68 billion reported in the same period a year ago. The number of jeans sold also increased, rising 6.4 percent to $342.6 million from $322.1 million. In comparison, sales of women’s sportswear fell 3.1 percent to $72.51 billion from $74.81 billion.

“I think what we’re beginning to see is that denim has a life of its own,” said Marshal Cohen, NPD’s chief industry analyst. “I don’t want to say recession-proof, but it was able to maintain whatever growth it had.”

The industry wasn’t impervious to the withering economy, showing notable shifts in where consumers shopped and how much they were willing to spend. According to NPD, the average price women paid for jeans declined 1.6 percent to $23.44 from $23.83 last year. The largest price segment of the market was represented at $20 to $29.99, where sales rose 6.9 percent to $2.34 billion from $2.06 billion. Although still the smallest price segment, jeans retailing under $10 posted the biggest gains, spiking 36.4 percent to $278.4 million from $204.1 million.

Specialty stores remain the channel of choice among consumers by a wide margin. However, consumers were on the hunt for bargains. Outlet sales vaulted nearly 50 percent to $101.3 million from $69 million. Consumers also likely took advantage of heavy discounting at department stores, which saw an almost 10 percent gain in sales to $1.3 billion.

While the industry has proven its ability to weather the worst of storms, there is little expectation of a quick return to the boom times of 2001 to 2006, which brought a rise for names like Seven For All Mankind and True Religion. The U.S. economy, in particular, has taken a pounding from which it will take years to recover. According to the U.S. Department of Labor, the nation’s unemployment rate rose to 8.9 percent in April. Since the recession started in December 2007, more than 5.7 million jobs have been lost and the number of unemployed Americans has reached 13.7 million.

The nation’s retailers responded to the crisis first by slashing orders and then culling their own workforces. Department stores employed 1.5 million people as of April, a decline of 58,000, or 3.7 percent, from April 2008. Specialty stores had 1.4 million people on the payroll in April, having cut 61,000 jobs, or 4.1 percent, from a year ago. An untold number of independent boutiques have shuttered. Those that have managed to stay open are having significant difficulty obtaining credit.

Making progress in this environment will require brands to exceed consumers’ expectations on price and perceived value. They’ll also have to adjust their own measures as to what qualifies as success.

“Our outlook is that this is the new reality and that we have to be successful within this environment, which means providing value and good product,” said Andrew Olah, chief executive officer of Olah Inc., a U.S. agent for foreign contract manufacturers and textile and hardware vendors targeting denim designers.

Olah believes brands and retailers must provide customers with a reason to buy, more so than ever before. Doing so will require being able to clearly communicate what the enhanced value of the product is. Those that can’t craft that message and deliver it simply won’t make it.

“There’s a lot of opportunity because there’s a lot of jeans being sold,” said Olah. “The issue is why would someone buy them from you. You really have to think about that.”

“If you’re not used to it being bad right now, well it’s not going to be good for a long time,” said Lawrence Scott, owner of Pittsburgh Jeans Co. Scott said great sales days this year would have been considered normal days a year or two ago. He’s found his denim business has settled solidly in the $160 to $198 range. Anything with a retail price point approaching $300 he won’t even consider anymore. That said, Scott said he’s also had little luck with brands that retail below $100.

Boutiques like Scott’s have been the beneficiaries of brands recognizing the need to go the extra mile in today’s environment. Over the last several months, brand reps from labels like Paige Premium Denim, William Rast and Genetic have made the trip to Pittsburgh to host special events at Pittsburgh Jeans Co.

“[The brands] are more willing to do it now,” said Scott. “And, you know, I never asked before. I really have not had anyone turn me down.”

Andreas Kurz, former head of Diesel USA and Seven For All Mankind and now president and owner of fashion consultancy Akari Enterprises LLC, anticipates it will take more than one or two seasons to see a significant surge in denim.

“If they grow single digits, they will be happy and they should be happy,” he said.

Kurz doesn’t see great resistance to high prices. However, consumers that may have purchased two higher-cost jeans are now more likely to only buy one.

NPD’s Cohen also believes denim will have a difficult time regaining its momentum. He anticipates there being more pent-up demand in other product categories like footwear and handbags.

The economic downturn may have been most sharply felt in the premium arena. According to a report put out by NPD in April, sales of women’s jeans priced more than $100 were up 16 percent in 2008 compared with 2007. It’s one of those eye-popping numbers that has spurred hundreds of new brands to flood the market (For more on the latest entrants, see page 14). Still, those numbers miss much of the pain experienced over the last six months.

Heading into the holiday season, major department stores engaged in massive discounting and order cutting, a trend that held throughout the winter. Nearby independent boutiques were forced to follow suit, adding to a list of woes that included slumping foot traffic and increasing difficulty obtaining credit.

The evidence of how precipitous the declines had been appeared in the first-quarter earnings results of True Religion, Joe’s Jeans and VF Corp., parent company of Seven For All Mankind.

VF acquired Seven for $775 million in July 2007 and was seeing strong growth from the brand until this first quarter of 2009. Management cited declining sales at Seven as a significant factor in a 6 percent revenue decline in the company’s contemporary brands business segment.

“The Seven For All Mankind brand, which has enjoyed strong growth since its launch in 2000, is clearly feeling the impact of the slowdown,” said Bob Shearer, chief financial officer, during a conference call with analysts, adding that challenges in the wholesale channel were expected throughout 2009.

It was a similar story for True Religion, which saw its U.S. wholesale business fall 11 percent to $28.9 million from $32.5 million in the first quarter. Sales to major department stores dropped nearly 13 percent.

“We believe these customers exited 2008 with greater caution and an overall mandate to reduce inventory positions in response to the challenging retail environment,” said Michael Buckley, president, on a call.
Management predicted continued single-digit sales declines to major department stores for the year.

True Religion has proved that the antidote to the department store swoon has been its own stores. The company’s consumer direct business saw volume vault 95.8 percent to $23.1 million from $11.8 million in the first quarter. The company opened seven stores during the quarter, bringing the total to 49 compared with 18 during the first quarter a year ago. Two more stores opened in April and management said it is on track to open an additional 16 units this year.

True Religion is also managing to do more than maintain margins within its stores. The average selling price for women’s jeans in True Religion-branded stores was $262 during the first quarter, up $21 from a year ago. Average price for men’s denim improved $18 to $287.

“Our own stores allow us to connect with consumers directly in an environment that highlights the essence of the True Religion brand,” said Jeffrey Lubell, chairman and ceo, during a conference call with analysts.

Kurz sees plenty of opportunities for brands to achieve growth. He believes few are moving aggressively enough to expand into international markets.

“No other market in the world has been as affected as the U.S.,” said Kurz. “The worst situation to be in is if all your eggs are in the U.S. market.”

Kurz advises taking a closer look at France and Germany, Asia, India and even Canada. Companies with a developed international segment are also likely to bounce back faster.

Kurz also believes True Religion is proving the necessity of having at least some branded stores.

“The only way around this department store filter is opening your own store,” he said. “You don’t need 300, but have a few and show your image and what you’re all about.”

Charles Jebara, president of the Z Co. junior denim label, believes brands should also be able to take advantage of the absence of a defining fashion trend.

“There’s a much broader spectrum of skinny being accepted,” said Jebara, who’s also finding customers respond equally to acid washes as they do darker styles.

Jerome Dahan, ceo of Citizens of Humanity, also sees the absence of a clear direction as an opportunity for those entering the market. Dahan echoes Olah’s belief that brands will have to present consumers with a clear message as to who they are and what their brand represents. An all-things-to-all-people approach won’t gain traction. And price, Dahan notes, doesn’t seem to be the biggest issue of concern among consumers.

“Whatever you design, make it authentic to where it comes from,” said Dahan. “All ideas are good today, but if you’re going to do it, make it what it should look like.”