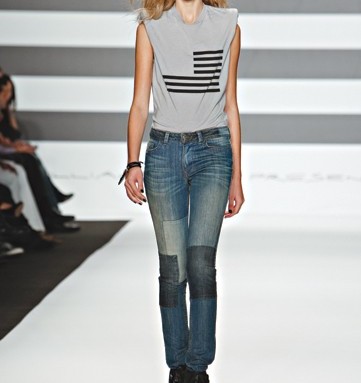 Contemporary denim makers are seeing the tough economy as an opportunity to get creative.

Whether it means adjusting product to add more value, launching new categories or focusing on growing sales abroad, denim firms are thinking of new ways to stay on top in a down market.

“At the core, we are a denim company and while we do have other products that fit into the denim lifestyle, we felt that with our denim business, we needed a new strategy,” Dyne said. “We needed a strategy to open the brand up to wider distribution channels both domestically and internationally.”

The new strategy divides the William Rast denim collection into three tiers — the opening tier, which retails from $165 to $175; the midtier consisting of jeans retailing for $185 to $195, and the top tier, at $195 and up. All jeans are branded the same with the same packaging and signature flag logo. The differences in prices stems from the amount of work that goes into the jeans. The opening tier, for example, consists of the more basic styles and washes, while the top tier includes jeans made with intricate details such as destruction, hand-painted details and heavy washing. The men’s line now has seven styles of jeans, while the women’s line has 17. The idea is for the company to open the brand up to new distribution channels.

“Each style has a very clear, distinct personality,” Johan Lindeberg said. “It’s important for us to be able to show the customer that difference, especially in the competitive market we are in.”

Marcella Lindeberg, who is the creative head behind the women’s William Rast collection, said she worked hard to cover all the bases — ranging from jeans for a woman looking for destructed boyfriend jeans to sexier cropped skinny jeans to a high-waisted flare style. She has also paid more attention to detail.

For example, “Justin’s [Timberlake, one of the line’s co-founders] mom was complaining that one thing she hated about jeans was that her belt always slips off from the loops,” Marcella said. “We really worked to make every detail perfect.”

Denim veteran Michael Glasser, who cofounded Seven For All Mankind and Citizens of Humanity before joining forces with contemporary designer Joie Rucker to launch Rich & Skinny in 2006, said he knew he had to react quickly as soon as the economy began getting sour.

“What we realized is that we had to do something to bring down our prices, all while making our product even more meaningful,” Glasser said.

About a year ago, Rich & Skinny launched a collection of basics that were high quality, but at a lower price. Glasser said the new fashion basics program has made the overall brand even stronger, while bringing the average price point down to about $145 at retail, when jeans used to sell well at more than $200 a pair. Glasser also said the brand’s boyfriend jeans style is selling well despite the economy. It’s this style that has resulted in the company’s overall growth during the downturn, he said.

“Over the years, I’ve learned that no matter what the economy is like, we have to be very price competitive, quick to react to our customers’ needs and be able to deliver quickly,” he said. “That’s always the secret to success in this business.”

For Seven For All Mankind president Topher Gaylord, the biggest changes as a company have been made behind the scenes. He has worked to push the creative team toward constant open communication, which creates an “overall environment which is completely focused on design,” he said.

“While basics are still important to the overall business, it’s the fashion styles which are moving in this market right now,” he said. “We are finding that women don’t always want something at a lower price. She will spend the money if she has a reason to buy.”

Gaylord said the company has also been working on building its own retail business — 15 freestanding stores opened in 2008, and 12 more are planned in 2009.

“The stores are doing well. E-commerce is performing above expectations,” he said. “Retail has been a great way for us to service our customers, all while building brand awareness.”

Chip & Pepper co-founders Chip and Pepper Foster said they are working through the tough economy by staying focused on their key retail accounts and refusing to ship to retailers who do not pay. Also, Pepper said, they have been negotiating with almost everyone they can.

“Everything is negotiable these days,” he said. “The wash houses who used to do $20 washes are doing them for $10.”

Pepper said in many ways, the state of the economy has forced them to look at the overall business and think back to how they started the brand in 2003.

“We’ve never been about being trendy,” Chip said. “We’ve scaled back the line to make it very focused and we’ve edited it down to about only 25 sku’s. Each pair of our jeans has tremendous value, and while we are working on ways to lower our prices, we refuse to step outside of what we have built. We will always manufacture here in the U.S. and will always be about quality.”

At the Australian denim brand Nobody, creative director Wesley Hartwell said while it chose not to make any “knee-jerk reactions” to the economy by way of changing directions, the company has focused on getting more creative to celebrate its 10th year in business.

Hartwell said the new Australian Heritage collection launching in the fall will showcase the best of what Nobody does in the way of fits and washes on denim pieces including dresses, jeans, jumpers, shirts and shorts.

“The entire collection is hand-customized in a very attention-to-detail, slow-processing kind of way,” he said. “We wanted to convey our unique attitude and point of view in the world — a freedom, optimism, creativity and easygoing outlook — denim heritage and lifestyle.”