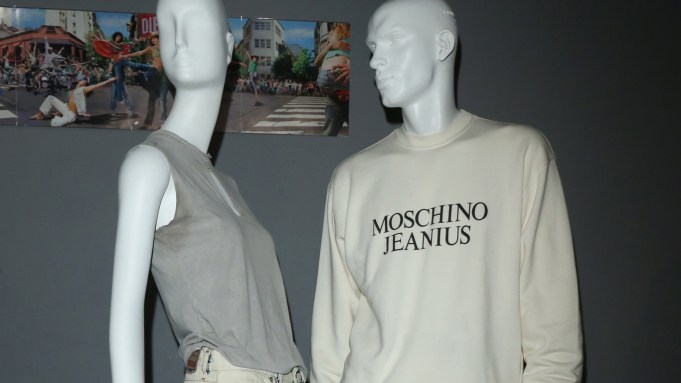 NEW YORK — “Denim: Fashion’s Frontier” at the Museum at FIT takes on the ambitious task of presenting a 175-year history of the ubiquitous blue jean, from a pair of handmade men’s work trousers that date back to the 1840s through to recent influential looks including a denim gown from Junya Watanabe.

The exhibition is ambitious because denim has a deep and rich history that has been embedded in popular and sub-culture for nearly 170 years. By way of reminder, jeans have been worn and favored by a widely diverse group that includes cattle ranchers, miners, motorcycle gangs, hippies, prisoners, factory workers, hip-hop artists and housewives, among many more.

So one could have easily seen the exhibit spiraling down any of the many rabbit holes that comprise the historical eras of denim — from the French-inspired late 1970s and its influence of Jordache, Fiorucci and Calvin Klein labelled jeans to the global expansion of premium denim brands in the late 1990s. But curator Emma McClendon has created a tight, well-edited and well-informed exhibit.

The show, which runs from today to May 1, tries to take on a “wider view” of denim, McClendon said, that also exposes some of the evolutionary steps between eras. One observation is that while denim has spanned the market from couture and ready-to-wear to specialty store and mass, its evolution continually draws inspiration from prior periods. For example, a back cinch that appeared on the very first pairs of dungarees suddenly pops up on a pair of Levi’s Engineered Loose-Fit jeans circa 2000, and then again this past year on a pair of Kapital Century Denim jeans from Japan.

By way of inspiration for the exhibit, McClendon said she was researching the work of Yves Saint Laurent from the 1970s, “and denim kept popping up. And then I learned that [Levi Strauss & Co.] had won a Coty award in [1971] for its influence on world fashion.”

That prompted her to dig into the museum’s collection, and “I was struck by the number of denim pieces we had — thanks to [former] curator Richard Martin.” Martin, who died in 1999 and who taught art history at FIT as well as New York University and the School of Visual Arts, amassed a broad range of denim pieces over a five-year period, and McClendon suspects he had a denim exhibit in mind.

“We tried to include many of the touchstones of the history of denim while also examining other cultural nuances,” McClendon added.

Those nuances include, for example, a campaign in the 1950s to counter the negative impact on the denim market due to biker bad-guy films such as “The Wild One.” The 1953 film tarnished the industry by giving blue jeans a bad connotation. In response to declining sales, mills formed the Denim Council and launched a campaign that included cartoon illustrations, which are on display at the museum, touting the history and fashion of blue jeans.

The exhibit also touches on key developments in the industry. “In the 1970s there were a lot of experiments in denim,” McClendon said as she pointed out a pair of Saint Laurent jeans made of satin, not denim, but with a five-pocket design.

“[Yves Saint Laurent] never presented denim in couture, but it was included in his Rive Gauche ready-to-wear,” McClendon said, adding that the designer was really the first to elevate denim in the market.

Other notable milestones include Claire McCardell’s “popover” denim dress from 1942 — complete with a wide pocket and oven mitts — designed for the hard-working World War II-era housewife. There are also key products from Levi Strauss & Co., such as a 507 denim jacket from the 1950s and a pair of Levi stretch jeans from 1976 that utilized Lycra. Also on display is a pair of jeans designed by Tom Ford for Gucci in 1999, “which really was a tipping point for the premium market,” McClendon said.

The Museum at FIT is located on Seventh Avenue at 27th Street here.